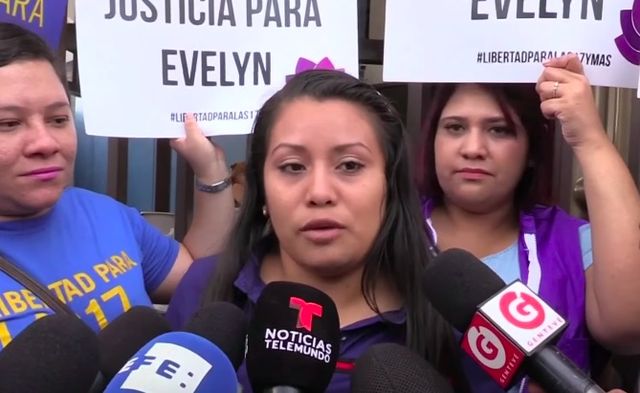 Evelyn Beatríz Hernández Cruz, a 21-year-old woman from El Salvador, had already served 33 months in jail on a charge of attempted murder after having a miscarriage in 2016. She was freed this past February when El Salvador’s supreme court overturned her 30-year sentence. But her freedom has been short lived, as she now faces another trial for the same crime.

According to The Guardian: “Hernández says she was raped in 2015, during her first year of college. On 6 April 2016, Hernandez, aged 18, entered the outside latrine at her family home suffering diarrhoea and severe abdominal pain. She gave birth to a stillborn boy, and lost consciousness due to heavy bleeding.” She was found by her mom and taken to a nearby hosptial, where medical staff alerted the authorities that there had been signs of delivery, but no fetus. The fetus was discovered in a septic tank in the family’s home. Evelyn was put in jail only a few days later.

The Guardian also reports that “the medical coroner recorded aspiration pneumonia as the cause of death, having discovered meconium, fecal matter, in the baby’s lungs and stomach.” The evidence for miscarriage is obvious, but the country has its own political agenda enacted through the court system.

Abortion has been entirely illegal in El Salvador since 1998, even in cases of rape or incest. Sadly, Evelyn is one of many women who have been prosecuted by the state. Furthermore, these strict laws most often criminalize poor, rural women who do not have the proper access to prenatal care and medical facilities. According to BuzzFeed News, when it comes to criminalizing miscarriages and still births, “more than 38 women have been released from jail, 16 remain incarcerated, and at least three — including Hernández — are in the middle of legal proceedings.”