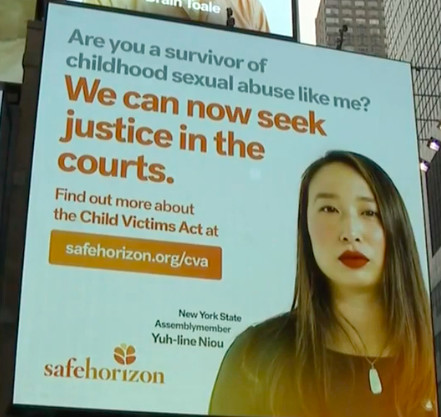 After 13 arduous years, the Child Victims Act went into effect today in New York state, giving survivors of childhood sexual abuse the legal option to pursue justice they've long deserved. The act, passed this part February, implements measures that that will improve two of the state's more oppresive limitations placed on survivors. One is the permanent extension of the period of time during which survivors have the legal right to prosecute their abusers and the institutions associated with them. The other is a yearlong window in New York State, beginning today, during which the statute of limitations will be completely suspended.

KNOW YOUR RIGHTS: Survivors, lawmakers and advocates gathered in Times Square to announce the launch of a new PSA explaining the Child Victims Act. https://t.co/gWBFMaGpr3 pic.twitter.com/utZzMgRWPl

New York State’s legislative history regarding prosecution of child sexual abuse is considered to be one of the most restrictive in the country. This is in comparison to multiple states that have already eliminated a statute of limitations for all sex felony crimes as well as the eighteen states (and District of Columbia) extending their statute of limitations this year. Before this reform, survivors of childhood sexual abuse in New York had only until their 23rd birthday to take legal action in response to the crimes committed against them. The short statute of limitations protected perpetrators and supported false narratives surrounding the ability of survivors to accurately report their past trauma.

Moments ago our firms filed the first case under the New York Child Victims Act against @RockefellerUniv for the sexual abuse committed by professor and senior physician Dr. Reginald Archibald https://t.co/fvYzR7iIG2

The year-long period beginning today, in which survivors of any age can hold abusers and associated institutions legally accountable for their crimes, is commonly referred to as a “look-back window." This move follows California’s successful enactment of a look-back window in 2003 and the state's current deliberation over whether or not to implement another in the coming years. The permanent increase of the statute of limitations in New York will allow survivors to pursue misdemeanor charges up to the age of 25, felony charges up to 28, and civil suits up to 55.

Emotional scenes in many law firms overnight as the first of many lawsuits were filed after the lookback window under the #ChildVictimsAct opened. Hear responses from attorneys and victims on this historic moment on #YourMorningBuffalo @SPECNewsBuffalo pic.twitter.com/qgLT9OHRh5

Not without its opposition, the Child Victim's Act resistance was funded heavily by institutions who would suffer from the Act going into effect. This includes leaders in the Roman Catholic Church, the Orthodox Jewish community and the Boy Scouts of America—groups with a history of enabling and perpetrating crimes of childhood sexual abuse. But with democratic control of both the state Senate and Assembly, as well as ongoing conversations between Governor Cuomo and advocates on this issue, the act overwhelmingly passed both legislative houses and was signed by the Governor earlier this year.

Survivors of childhood sexual abuse deserve more time to seek justice in our courts. Now they have it. Watch these survivors or go to https://t.co/Cy1z9DREYR to learn more. No matter what you choose, #SafeHorizon supports you, and we are here to help. pic.twitter.com/QRxr2Ehjld

With the changes going into effect today, "New York Courts are expecting to see hundreds, if not thousands, of lawsuits filed in the coming weeks and months," according to NPR. While these lawsuits will undoubtedly bring an immense amount of pain to the surface, this is an unprecedented opportunity to close wounds that the newly overturned laws prevented from healing in full. Hopefully, this pain and accountability will lead not only justice in the present but prevention in the future.