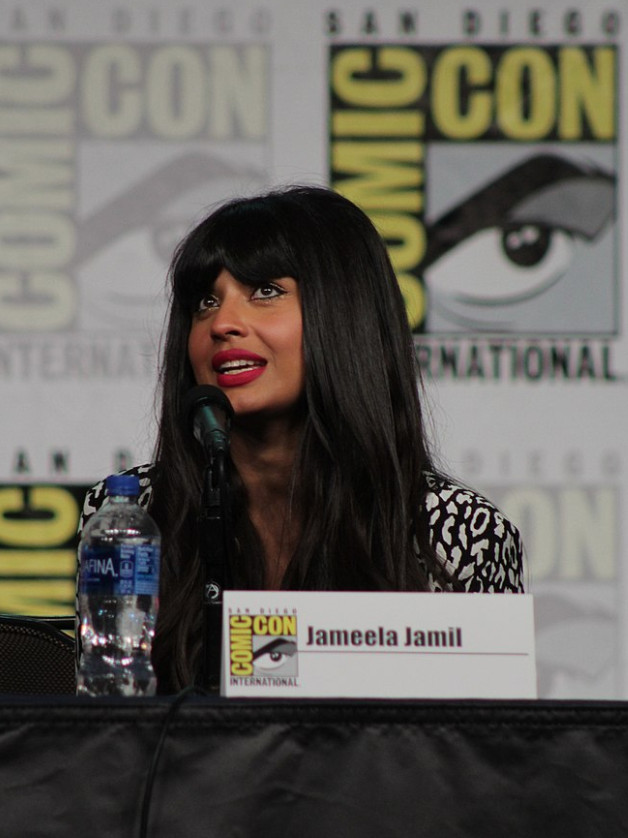 Jameela Jamil is the realest actress and activist around; and now her back fat in a promo for the TV show “The Good Place” is too. Using her celebrity platform to empower women, promote inclusivity, destigmatize open conversations about mental health, and fight back against rampant fatphobia, the ad is a victory in Jamil’s crusade against airbrushing and unrealistic standards for women’s appearances. “As someone who had such obsessive body dysmorphia and was so fixated on the embarrassment of what we perceive as ‘flaws,’ Jamil tweeted on Saturday, “this is just a little win for little anorexic teenage me.”

Finally able to INSIST my image, even on billboards isn’t ever airbrushed. I get backfat in Every. Single. Bra. And I used to hide/bin so many photos because of “muffin tops.” Double chins/ “imperfections” because I never saw them on people on TV.#freethebackfat #letabitchlive pic.twitter.com/UkqpbSOzT0

Having struggled with eating disorders for the “better part of two decades,” according to an essay published in British Vogue, Jamil largely attributes her troubled relationship with food to the societal expectation for women to appear perfect at all times and above all else. So now, starring in an award-winning TV show and nearing 900,000 Twitter followers, Jamil has devoted her time and energy to becoming the role model missing from her own youth, publicly embracing “imperfections” and spearheading the body neutrality movement.

In an interview with InStyle Jamil explained the philosophy of body neutrality by saying: “Stop thinking about your body. Don’t try and love it more, don’t hate on it. Just don’t think about it. When you stop thinking about your looks, about your body, and all the things that are wrong with it, you have so many more hours in the day.” Jamil has encouraged her audience to avoid mirrors, looking only once in the morning and once at night, and claims that her own body neutrality has led to benefits including better sex, cash flow, and job performance.

A year ago I posted this on social media, in a moment of rage, finally completely finished and fed up with how we value women, never expecting anyone to care much. I had no idea what would follow and turn into the most beautiful and healing thing I’ve ever been a part of. Thank you @i_weigh community for being so incredibly inspiring and brilliant and for being the army behind me when I need to tell truth to power. Without you there would be no change. You are incredible. ❤️

“I’m too scarred by how long I have spent hating and punishing myself,” Jamil wrote for British Vogue, “I can’t just stare at my thighs and shower them with love and praise. Besides, that would just be a new way for my mind to fixate upon my flesh again, which is still taking up space better used for other thoughts and plans.”

But that certainly doesn’t mean that Jamil isn’t a fatphobia fighting warrior princess calling out the bullshit one body-shamer at a time.

When Kim Kardashian came out with her KKW Body collection—i.e. concealer for the neck down—Jamil criticized the product on Twitter, explaining that a full body of unmarked, even-toned skin is a ridiculous standard of perfection for women and that she would “rather just make peace with my million stretch marks and eczema.” A thread in which hundreds of women shared their own skin conditions that they don’t want to be pressured into covering quickly followed.

Jamil called out “portion control” plates being sold at Macy’s as the misguided and misogynistic products they were. The store removed the plates from stock and issued an apology to Jamil, who responded with grace and empathy. Consistently emphasizing progress over perfection, the actress has been upfront about her own failings and mistakes. She makes it clear that no one is born into unflawed “wokeness” or understanding, but that each person is responsible for making the effort to learn, improve, and affect change.

Thanks to @Macys for acting fast. I’m always in search of progress and not perfection. Our society is having to unlearn all of this hyper-normalized anti-fatness. It’s so vital that those of us with the biggest platforms do our part in destabilizing it, because it’s hateful. ❤️ https://t.co/BO6jC5aBJw

She has repeatedly spoken out against celebrities promoting diet products—Khloe Kardashian posing on Instagram with “@flattummyco meal replacement shakes,” Kim Kardashian sucking on appetite suppressing-lollipops. She hates the term plus-size because it implies that there is an accepted standard that those women are beyond. She told PAPER magazine that “if you can’t design things that look good on people who are bigger than just a size 0 or 2, you aren’t talented." It goes without saying that she does not post edited pictures of herself on social media.

Far from a fad or publicity stunt, Jamil’s fiery devotion to promoting body confidence is a consequence of her personal experiences. Jamil once worked as a model agent, claiming in a 2014 speech in the House of Commons that she quit because she felt that what young girls were forced to go through to get onto the catwalk was "criminal." When Jamil became the first woman to ever host radio show BBC 1, reporters chose to cover the weight she gained rather than the staggering 200,000 listeners that tuned in to hear her. She has endured vicious body shaming and pictures of her stretch-marked bottom circulated with unflattering comments.

She is not speaking out, releasing size-inclusive clothing lines, and even creating an affirming, inclusive social media haven called @i_weigh because she thinks it will increase her popularity or appeal to a profitable market. She is not a bandwagon body positivity influencer, telling everyone to love their own bodies just because she has learned to live with her own size 6. When Yahoo UK tweeted about Jamil’s decision to forego airbrushing with the caption “Actress @jameelajamil wants everyone to celebrate their ‘back fat,’” she fired back writing:

FYI I’m not telling you to celebrate your back fat. There would be NOTHING more annoying than some slim actress telling you how to feel about your own body. All I’m asking is that we accept our bodies as normal and human and varied and not suffer shame or failure over our bodies. https://t.co/JvFDlYMm96

Jamil is bold, unapologetic, and insistent. In a society where every billboard tells women to hate their bodies and the body positivity movement can often make self-hatred feel like a sin that must be hidden rather than worked out openly and productively, Jamil is a refreshing dose of realism. She knows that there are women, including herself, who cannot confidently embrace their appearances overnight or maybe even ever. The years of seeing perfectly airbrushed models and actresses in ads and on TV, the constant fixation on women’s bodies as a measure of their worth can’t just be forgotten by some of us. But while she urges women today to just stop caring—finally taking the pressure off—Jamil does everything in her power to ensure that the young women now growing up will enter a world just a little bit more tolerant and a little bit more willing to #letabitchlive. And that, quite plainly, does a fatphobia fighting warrior princess make.

In Celebration Of Cellulite, Scars, And Other Seeming “Imperfections”