Capable Is Our First Name: One Woman's Story Of Traveling Alone 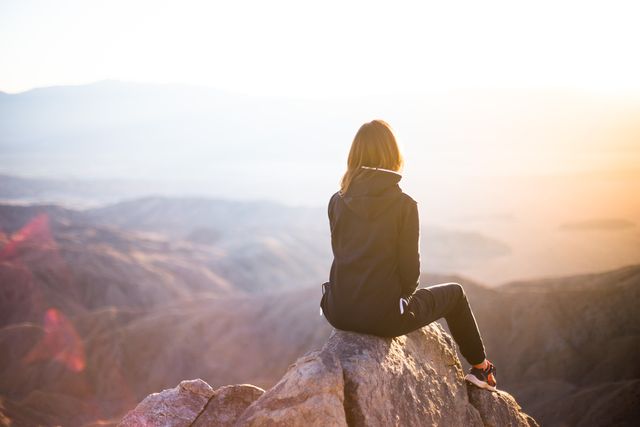 Spring convocation of undergrad came and went in a dizzy haze. Flurries of champagne silk and moving boxes seemed to swirl around me in a blur. I remember walking to receive my diploma in a kind of trance – my hyperactive, anxiety-driven brain was already thinking about the long road ahead of me.

Fast-forward one month to my teary-eyed self haunting the departure lounge of Pearson International Airport. My family and I stood before the security gate in a tight circle with our shoulders touching, trying to keep the heat in. I told them I would see them soon—a lie to sugar-coat their ache as much mine. The truth was, I had no plan. I thought about my name printed in block letters across the stiff card of my boarding pass; it sat patiently tucked between the pages of my passport, thick with prepared visas. My stomach dropped into the sole of my hiking boots when I remembered that it was one way. Practically humming with fear, I gave them each a long goodbye. Mama gave me last-minute reminders, Papa told me to be safe, my sister gave me an all-knowing squeeze in the way that only sisters can.

I looked down at my Osprey pack sitting loyally by my side. I had chosen orange, my favourite colour, in the hopes that it would make this thin shell of neoprene feel more like home when my own was so far away. It was the size of my torso and jammed with malaria medication and one of everything from MEC’s travel section (75% of this would be left behind at the first hostel). I took a deep breath, praying it would keep me full as I prepared to let go of so much. Swinging my pack onto my back, its frame groaning in protest, I crossed over the border between comfort and whatever lay on the other side.

This is not a story of fearlessness. It’s a story of itching nerves and deep-belly dread. As I waded through customs that day, radical self-doubt throttled itself against the walls of my chest. The soon-to-be familiar thud of security bins against conveyor belts echoed as if worlds away from my own.

It’s safe to say that when I left home, fear was my baseline. For the first month or so, the person checking into hostels was just a watery version of me; I sat in restaurants alone and my skin prickled with the looks of other guests, always lingering just long enough to shift the ground beneath me. With time, something in my skin thickened as the sharp edges of aloneness settled in and in many ways, I flourished: I sang my way into 23 from an ashram in India, celebrated Christmas from a quirky hostel in Kathmandu, and welcomed 2018, legs quaking but heart wide from Mt Everest Base Camp. Yet no matter how familiar “table for one, please” felt in my mouth, I still carried around fear like it was another piece of luggage.

Sometimes I think it takes courage to live this kind of life – to travel alone, to eat alone, to wake up alone somewhere far from home. I think it takes even more courage when we’re told from the outset that we’re not good enough for it. As women, we are nursed to maturity on fear. From childhood, we listen to bedtime stories of boundaries and the importance of staying safe within them. I think this must begin early with the words we use to raise our girls. Whether it’s swinging across the monkey bars or climbing a tree, we condition girls to believe they have more to risk. We stifle our girls with “be careful” or “don’t hurt yourself” but coach our boys on how to reach the next branch.

Now, I was a lucky girl. I still am. I grew up in a two-parent household who raised their daughters as superheroes. There were no limits in our house. It was “atta girl,” “try again,” “we believe in you.” I know not everyone is so fortunate. That I grew up in a locus of radical encouragement was exactly the stability that made me feel safe enough to jump, not knowing where I’d land. But beyond our family walls, I was slapped with the reality that a bright-eyed young woman with two degrees and a healthy dose of attitude under her belt was still not enough to weather the world on her own. My decision to travel alone was weighed down with warning by most everyone I told. Family, friends, even periphery acquaintances shuddered at even the mention of travelling alone as a woman. They unloaded “Aren’t you scared?” upon “That’s so dangerous!” as if my own (gargantuan) fear hadn’t already lodged itself comfortably at the base of my throat, nestled in for the long haul.

I must admit, travelling alone as a woman holds different albeit greater risk for women than men. Routine logistics such as taking a local bus warrant pause for female travelers where it may not for males – at least not for the same reasons. These risks transcend a binary-centric perspective and are layered with intersectionalities. Solo travel may be experienced differently for LGBTQ+ folks, femmes of colour, and femmes with disabilities. These are perspectives I cannot speak to; instead, I point to Mari Brighe who recounts her experience travelling alone as a trans woman and Gloria Atanmo who speaks of travelling as a woman of colour.

Despite these realities, bubble-wrapping our girls in this way serves only to drive home the shrinking belief that she doesn’t have it in her. Travelling alone for so long would always have been scary but by the time I reached my fly date, I was so soaked with the warnings of others that I could barely tell where their fear ended and mine began. While likely well-intentioned, the lasting impression of this was a billboard-sized message that they didn’t find me capable.

This rhetoric spills into women pursuing adventure in all its flavours, be it starting a new business, taking a salsa class, or learning a new language. We laden women, sometimes even unconsciously, with spoonsful of perfect as the standard, and failure as the worst possible outcome. When fear spills out before encouragement, it has a way of grinding in the narrative that girls hear from a young age that no matter how tall she may stand, the obstacles stand taller, that worth is not part of her genetic make-up.

The me that left that July was swimming in fear, fresh batches of dread doing somersaults in my stomach each morning. But the me that left also decided that I would be louder than the warnings. The reward for this was searing pride when I walked through the sliding glass doors at Pearson arrivals one year later and bottomless gratitude for the arms of my family, still warm from when I left.

Since then, I can’t seem to quiet the gnawing reminders of when I let fear decide. I can’t help but wonder how much taller I would be – how much taller we all might be – if we were raised to stand on a platform of capable instead of digging our way out of less than. I can’t help but wonder what we might unleash if we raised generations of women with an unbridled sense of self-worth and potential, to unequivocally believe in themselves.

So I will remind myself to choose carefully the language I drape across our women and girls as they grow. And in doing so, I will remind myself just as much that though this world holds risk, we hold more; that Capable is our first name; that bravery looks like us. I hope you will join me.

How To Travel Around The World For Almost Free

Lauren Toccalino is a Canadian-born writer, artist, and adventurer. She completed a Bachelor of Music in French Horn and a Bachelor of Arts in International Development and English Literature at McGill University. She loves travel and all things outdoor. She spent time working in women’s empowerment and human rights in India and South Africa. She currently lives in Toronto where she is a Juris Doctor Candidate at Osgoode Hall Law School.