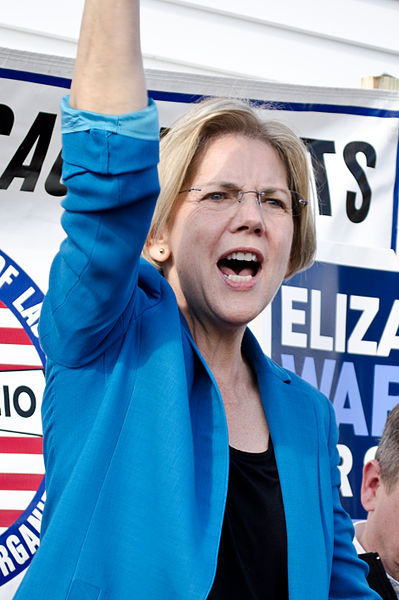 In step with the long history of women getting blamed for things they aren't responsible for, Elizabeth Warren is the latest to be targeted — and she isn't having it.

Following the El Paso shooting, people were quick to call out how the shooter's white supremacist motivations overlap with Donald Trump’s hateful and racist rhetoric. After two long years of Trump touting white nationalist rhetoric and creating policy in line with it, there is a clear connection to not just the El Paso shooter, but multiple mass shootings and displays of white nationalism during his presidency. So once reports came out that the Dayton shooter had a liberal-leaning Twitter, the President and his supporters immediately made the comparison between Trump’s relationship to the El Paso shooting and Elizabeth Warren’s with the Dayton shooting.

Of course, this isn’t the same situation at all. It just so happened that in the alt-right's wit and careful research, they happened to forget a small, incremental detail concerning this comparison: Elizabeth Warren didn’t base the entirety of her career on hate speech. Such a silly mistake!

After the first shooting in El Paso one could smell the excitement among the media Left. Finally we got Trump! Now it seems the second shooter in Dayton is a socialist who supports Antifa & Elizabeth Warren. This guy has totally ruined their ideological narrative!

While alt-right twitter continued to outsource any blame put on their beloved white supremicists onto women and minorities (as they do), Warren’s campaign wasn’t afraid to address the comments. Her spokesperson responded to the alleged connection by denouncing the killings and stating, “There is absolutely no place for violence in our politics.” Additionally, Warren stopped the efforts to use her name to distract from or lessen the blame on Trump. Warren’s spokesperson continued, “Let’s be clear – there is a direct line between the president’s rhetoric and the stated motivations of the El Paso shooter. This is an attempt to distract from the fact that Trump’s rhetoric is inciting violence as extremist-related murders have spiked 35 percent from 2017 to 2018.” Not only did Warren respond to her part in these shootings, or lack thereof, but she still managed to hold Trump accountable for the racist climate he has helped foster all over the country.

2) Bernie Sanders and Elizabeth Warren don't spread hate like you do via Twitter, at your rallies, on TV.

3) Donald Trump is the one, who referred to white supremacists in Charlottesville as "very fine people"

Call it bias journalism, but maybe it is okay to judge these two cases differently. This isn’t to say there isn’t an alarming pattern when it comes to mass shootings in America: note that both of these shooters were white men, and both shootings could have been prevented with stricter gun control. One was committed by a man who had rape and kill lists in high school and, for whatever reason, appeared to support a female democratic presidential candidate with plans to implement common-sense gun laws. One was committed by a man who was driving to the border to defend his country from an ‘invasion’ of Hispanics. That one is without a doubt tied to the president, who has repeatedly used that very word to describe immigration coming from Latin America and responded with a silly comment to someone suggesting the people coming across the border should be shot. This is all besides the fact that the El Paso shooter cited the New Zealand Mosque shooter, which specifically mentioned Trump, in his manifesto. Warren has come nowhere near supporting that kind of violence and hatred towards minority groups in this country, and has nothing to do with the decision making of the Dayton shooter. A racist and NRA-friendly president with loose gun laws does.