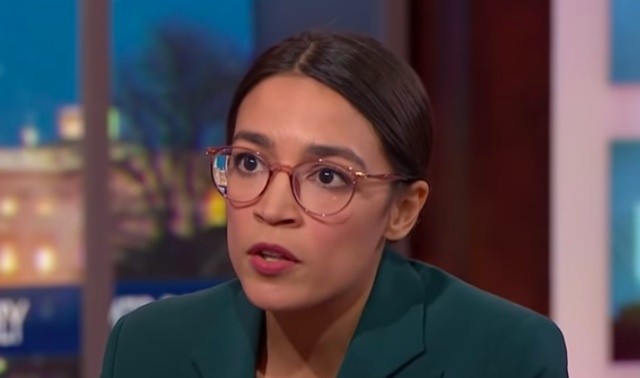 Picture these young men in your head right now. Go on. Now look at the photo.

Pictured: seven young white men in “Team Mitch” T-shirts, gathered round a distressed looking cardboard @AOC, groping and kissing her. The caption, “break me off a piece of that.”

Did you picture this exact group of scrawny young white dudes? Amazing!

Ocasio-Cortez (rightfully) didn’t back down, calling out majority leader Mitch McConnell on Twitter “Hey @senatemajldr – these young men look like they work for you"

“Just wanted to clarify: are you paying for young men to practice groping & choking members of Congress w/ your payroll or is this just the standard culture of #TeamMitch?”

Only a day before the photo emerged, AOC had called out McConnell for his inaction on gun violence. After the Senator offered up the routine “thoughts and prayers” rhetoric in response to the horrific shootings in El Paso and Dayton, AOC challenged McConnell for refusing to bring a House bill to a vote in the Senate, writing on Twitter:

“The House passed HR8, a Bipartisan Background Checks Act, *5 months ago* and the Senate has yet to vote on it. It was one of our 1st major priorities after ending the gov shutdown. You’ve been sitting on it since February giving bogus excuses. Care to explain the people why?”

Through the years, McConnell has accepted over $1 million in campaign contributions from the NRA. It’s amazing that turtle-y fuck can even stand, what with his lack of spine and all.