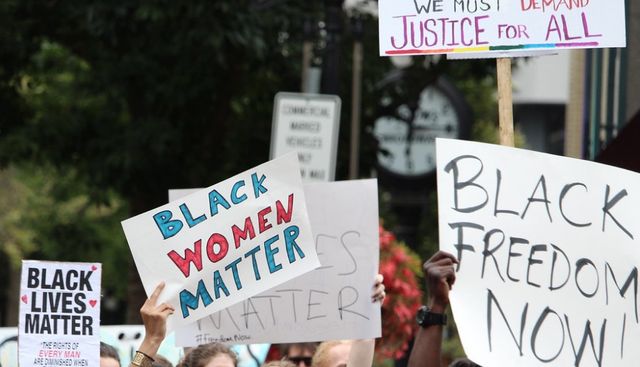 At 4am on July 20, 29-year-old Denali Berries Stuckey was found shot to death on the side of a road in Charleston, South Carolina, Out Magazine reports. Stuckey’s death is being investigated as a homicide, but police have not confirmed whether it is being investigated as a hate crime. Stuckey is the third known trans woman to have been murdered in South Carolina and the 12th to have been murdered in the United States this year alone. All of the victims were Black.

In an article for Vice, Diana Tourjée writes, “this latest string of murders has brought new clarity to the inseparability of anti-trans and anti-Black violence.” We cannot understand the motive of these crimes without addressing the stark racial disparity: Patrisse Cullors, co-founder of anti-racist movement Black Lives Matter, tells Vice, “Black women are the most marginalized in our society. They experience the most violence.”

As a result of these conditions, born out of systemic racism, trans women of color oftentimes turn to sex work as a means of survival. Aside from currently being criminalized, sex work is an especially dangerous profession for trans women: As Tourjée writes, “Black trans women aren’t simply killed because they’re trans; the social conditions responsible for their deaths represent a holistic crisis, spread across every aspect of life.” When the country, lacking in protections against anti-trans discrimination, fails to recognize ongoing systemic racism, it fails Black trans women.

The epidemic of violence against trans women is a crisis in which Cullors believes there should be more organization and allyship, regarding anti-trans violence, within Black Lives Matter. “The fight for Black trans people, and women in particular, is critical for the health of Black communities.”

Tags: Black Lives Matter , trans , women , civil rights , political rights , anti-violence , LGBTQ rights , LGBTQ rights , feminism,
Support Feminist Media!
During these troubling political times, independent feminist media is more vital than ever. If our bold, uncensored reporting on women’s issues is important to you, please consider making a donation of $5, $25, $50, or whatever you can afford, to protect and sustain BUST.com.
Thanks so much—we can’t spell BUST without U.