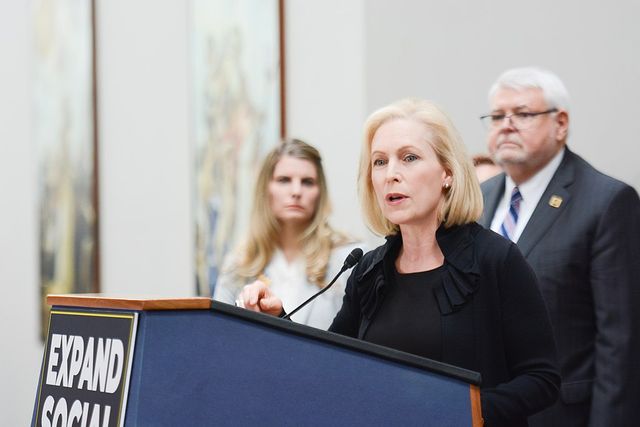 Democratic presidential contender Kirsten Gillibrand does not regret calling for Senator Al Franken to resign, and especially, being the first Democratic senator to do so. According to the Washington Post, during an event in New York on Monday night, Gillibrand said: “There was 34 other senators that called on him to resign...You wouldn’t know that today, given I seem to stand alone. But I could not stay silent. I could not defend his actions.”

The New York senator also expressed her disappointment that her male colleagues were not being asked about the issue as much as her female colleagues.

“Women are asked to hold accountable their colleagues. The men are not...Who is being held accountable for Al Franken’s decision to resign? Women senators, including me. It’s outrageous. It’s absurd.”

Gillibrand took issue with a recent New Yorker profile on Franken, a piece in which Franken reveals that he “absolutely” regrets stepping down from the Senate. And he’s not the only one. In talking with several Democratic senators, reporter Jane Mayer found that numerous Democrats regretted acting so quickly in regard to calling for Franken’s resignation. Many senators tried to highlight the importance of taking sexual misconduct seriously, but by letting the process unfold in front of a Senate Ethics Committee.

Gillibrand felt that the New Yorker piece did not do justice to the full array of allegations that have been made against Franken, including "two since he was senator, and the eighth one happened to be a congressional staffer."