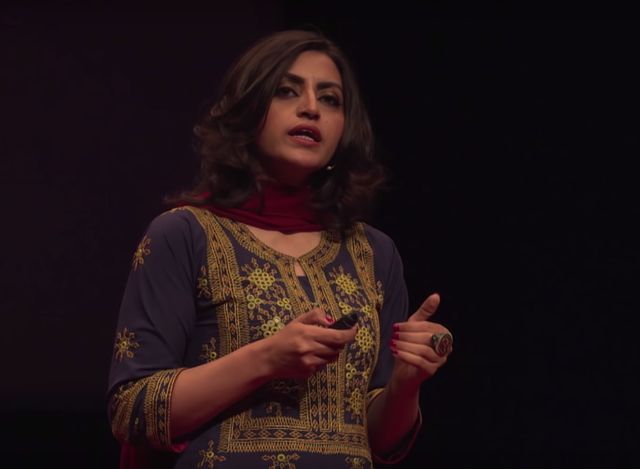 Gulalai Ismail is known for being outspoken against forced marriage, sexual assault, and gender inequality. The Pakistani feminist’s activism has brought her international acclaim. But it's also made her a target. Ismail is now considered an enemy of the state, accused of inciting rebellion.

With her safety in danger, Ismail has been in hiding for over two months. She’s evading Pakistan’s infamous security services known as “The Establishment.”

Though virtually no one has seen her since she disappeared in May, her family tells the New York Times that she’s been moving from home to home with the help of an underground feminist network, never stepping foot outside without a scarf obscuring her face and never moving to a new location without meticulous planning.

Meanwhile, security forces have raided her home multiple times, seizing computers, phones, and cameras. According to Ismail’s family, friends have been questioned with intimidation and torture tactics, and family phones have been bugged. Two black police cars have been parked outside of the family’s home in Islamabad, Pakistan, where they remain to surveil the household twenty-four hours a day.

During one raid in July, the police took the family’s driver in for questioning. He returned weeping, barely able to communicate. When he regained the ability to speak, the driver revealed that police electrocuted him and forcibly injected him with an unidentified fluid.

Methods this egregious suggest that the security forces’ desperation to find Ismail has been mounting. The Establishment has accused Ismail of a series of serious crimes, including “sedition, financing terrorism, and defaming state institutions” but they haven't pursued any formal charges.

Government officials also claim that these allegations are unrelated to Ismail’s feminism. Instead, they argue that they only take issue with Ismail’s involvement in recent protests. The security forces specifically cite Ismail’s participation in the resistance movement known as PTM, which defends the human rights of Pakistan’s Pashtun population—the second largest ethnic group in the nation.

But, to be sure, Ismail’s history of gender activism isn’t peripheral. It’s likely a primary reason that the hunt continues.

As a teenager, Ismail began the advocacy group Aware Girls, which brought young Pakistani women together to advocate for their rights. One member, Malala Yousafzai survived an assassination attempt at 15 years old and has become a major voice for the international feminist movement. A few years later, Ismail started guiding workshops and set up a hotline for domestic violence. She began to travel to human rights events across the globe and started winning awards for her work.

As of now, security services continue to pursue her. On Tuesday morning, former Pakistani lawmaker Afrasiab Khattak published a letter requesting support for the prominent activist. He calls on the Pakistani Senate’s Human Rights Committee to condemn the abuse that Ismail and her family continue to experience.

It seems that Ismail predicted she would become a threat to The Establishment. By 2014, she knew her safety was in jeopardy. In a BBC interview, she said, “I am aware that the security risks are high...at times I am afraid for the lives of my family...we had to relocate ourselves, again and again, we had to change our home because of the insecurities.”

So while Ismail has faced government censorship and surveillance for years, her stance has always been clear. When accused of blasphemy in 2017, she vowed, “I will not be silenced. I am not afraid of these cowards.”

Tags: Gulalai Ismail , feminist , activism , police , Pakistan , Establishment , PTM , hiding
Support Feminist Media!
During these troubling political times, independent feminist media is more vital than ever. If our bold, uncensored reporting on women’s issues is important to you, please consider making a donation of $5, $25, $50, or whatever you can afford, to protect and sustain BUST.com.
Thanks so much—we can’t spell BUST without U.