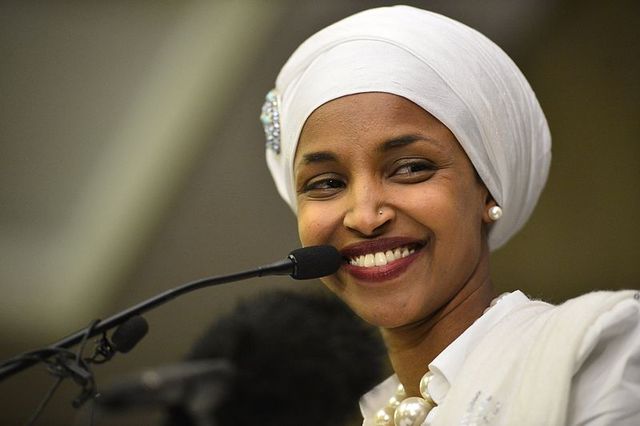 In an unsurprising, yet horrifically racist moment at a Trump rally in North Carolina yesterday, a crowd of fervent supporters erupted into chanting “Send Her Back,” with the message directed at Ilhan Omar, Democratic House Representative for Minnesota. The three-word epithet came after Trump spent a significant portion of his speech criticizing Omar by using false statements about her political positions regarding the Middle East and relying on racist and xenophobic characterizations of Muslims. Trump did nothing as his audience solidified his 2020 campaign strategy of white supremacy and nationalism, stepping away from the podium and enabling the dangerously hateful rhetoric to continue.

While Trump did not address the outright racism of the crowd, Ilhan Omar responded powerfully over Twitter. She quoted the Maya Angelou poem, “Still I Rise” — “You may shoot me with your words,/You may cut me with your eyes,/You may kill me with your hatefulness,/But still, like air, I’ll rise.” The calm, but profound strength in these words show that while Omar should never have to face such racist threats, her power in confronting such hatred is mighty, and unwavering. The representative even quoted Toni Morrison, tweeting that she will not fall victim to “the very serious function of racism” — distraction — and will instead continue working incredibly hard to serve the people of Minnesota in voting to raise the minimum wage to $15 an hour.

“The function, the very serious function of racism is distraction. It keeps you from doing your work." -Toni Morrison

I am not going to let them distract. Today I am going to do the work the people of Minnesota sent me to do and vote to #RaiseTheWage to $15 an hour. ??

Ilhan Omar's comments on distraction point to a common tactic in the Trump Administration: relying on dog whistle politics to draw attention away from the President’s failed policies, including the attempt to get the question regarding citizenship on the 2020 census. He began the strategic escapade earlier this week, with a series of racist tweets directed at Omar and three other progressive Congresswomen, Ayanna Pressley (D-Mass.), Alexandria Ocasio-Cortez (D-NY), and Rashida Tlaib (D-Mich.), telling them that they should go back to where they came from, in reference to their non-whiteness. Three out of the four women he targeted were born in the United States, with Ilhan Omar immigrating to the U.S. as a refugee from Somalia, and holding citizenship for over twenty years.

Many people, including Democratic presidential candidates Elizabeth Warren, Kamala Harris, and Bernie Sanders, have spoken publicly in support of  Omar, condemning the President’s racism. The hashtag #IStandWithIlhan began trending after the rally, with over 150,000 tweets posted in support of Omar as of Thursday morning. Few Republicans, on the other hand, have criticized the audience at the rally or Trump’s inaction, with many qualifying their discomfort with the “Send Her Back” chants with claims that Omar has contempt for America. The cowardice of the Republican party follows a successful House vote condemning Trump’s racist tweets towards the four Congresswomen, with only four Republican representatives breaking rank to approve the rebuke.

Trump has proven himself time and time again to be disgustingly adept at attacking his political opponents along misogynist and racist grounds, so it is no surprise that when the time calls for the President to step up and hold outright hate accountable, he is silent. But silence is violence, and Ilhan Omar will not be quiet. In fact, she's already back at work.

?? I am where I belong, at the people’s house and you’re just gonna have to deal! pic.twitter.com/W0OvDXGxQX

Tags: ilhan omar , trump , racism , rally , chants , feminism , maya angelou , social media , twitter
Support Feminist Media!
During these troubling political times, independent feminist media is more vital than ever. If our bold, uncensored reporting on women’s issues is important to you, please consider making a donation of $5, $25, $50, or whatever you can afford, to protect and sustain BUST.com.
Thanks so much—we can’t spell BUST without U.