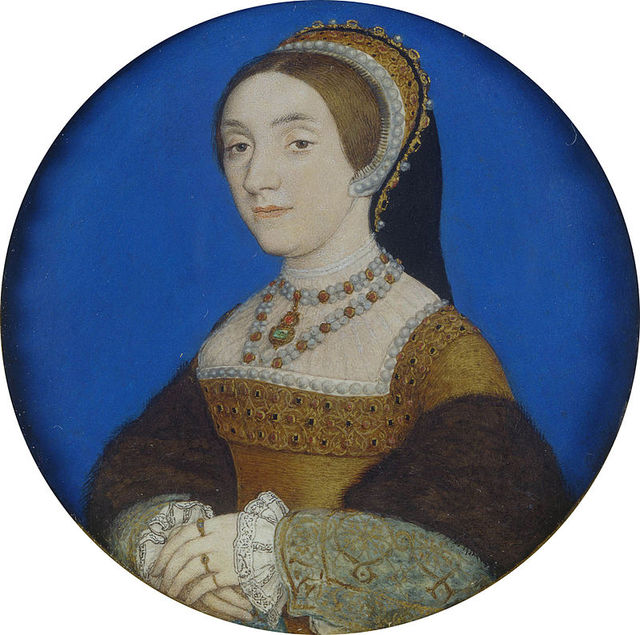 Catherine Howard is widely known throughout history as the dumb wife, the spoiled bimbo wife, the promiscuous wife. The one who got what she deserved.

Now, I’m not saying the rest of Henry Vlll’s wives don’t have wildly unfair labels attached to them – of course they do. But I’d argue that Catherine’s current historic portrayal is both demonstrably sexist AND hides her incredible true story: a girl who was tormented with sexual assault, blackmail and was constantly used as a puppet for more powerful men’s plans, YET grew up to be determined, ballsy and full of life.

It’s time to get to know the real Catherine. So let’s start by knocking down some of the misconceptions around her.

This sits across almost all historic interpretation of Catherine Howard, including those by noted historians. Though Alison Weir offers a sympathetic view of the young Queen in her book, Six Wives, she still sees her as “empty-headed,” while Suzannah Lipscomb describes her as “a stupid girl.”

This trend also crops up in more fictitious offerings, with Phillipa Gregory’s The Boleyn Inheritance portraying Catherine as vacuous and thoughtless. And let’s just take a quick look at how she's shown in pop culture smash hit, The Tudors:

One of Catherine's 1,000 blank stares, courtesy of The Tudors

For her time, Catherine Howard was educated as well as any woman was expected (or could be hoped) to be: she was proficient in household skills, dancing, needlework and music. (Put bluntly, she was educated in a way that was suited to her gender and class.)

Is she is less educated than Henry’s other wives? Yes.

Catherine’s cousin Anne benefited from an education at European courts, Katherine of Aragon and Anne of Cleves were educated as European Princesses, and Katherine Parr was extremely fortunate in having a mother who valued girls’ education. 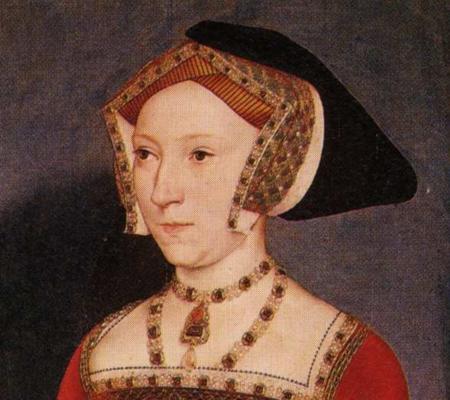 Jane Seymour, the ultimate "can't get over" ex

In fact, when Catherine became consort, she rather cannily modeled herself after this beloved late wife. She learned from the mistakes of her predecessors and became “the rose without a thorn.” Catherine’s motto “no other will but his”takes what Henry sees as Jane Seymour’s best traits but makes them her own.

She was submissive and sweet but also more charming, charismatic, and vivacious than Jane could ever have been. This was not the move of a teenage bimbo but, rather, the calculated work of a determined and intuitive young woman.

She was a slut

Acclaimed historian Lacey Baldwin Smith called Catherine Howard a “common whore,” also writing that “there never was such a whore” as she.

And you can see why history loves this portrait of Catherine! It’s just so juicy! A beautiful and promiscuous young woman pulled up to the highest position in the land. Her aging husband gifts her with wealth, comfort, and security, and she repays him by sleeping around with his most trusted servants and friends.

It’s a story as old as time…but it isn’t a true one.

Now, we know that Catherine had sexual partners before marrying Henry Vlll. However, modern evidence shows that these early relationships were not romantic whirlwinds but deeply traumatic experiences, based in neglect and emotional abuse, and were most likely forced. When Catherine was around 12, Henry Mannock was employed as her music tutor. Mannock took a liking to his young student, and started attempting to seduce the preteen.

Catherine turned down his initial advances stating “I will never be naught with you and able to marry me you be not.”Still, Mannock continued his pursuit and eventually Catherine gave in, giving her tutor permission to touch her “secret parts” in hopes this would placate him and he would “desire no more.”

Mannock continued to abuse his position of power over Catherine, actually boasting to friends that he had been with her so much that he knew of a secret mark on her body.

Finally, Catherine’s grandmother (who she was living with at the time) found out about the “affair” and ordered that Mannock never be alone with Catherine. But not before beating Catherine for flinging away the great commodity of her virginity.

But, despite the threat of Mannock being extinguished, there would be no respite for Catherine. When she was 13, Francis Dereham, a man of low but noble birth, was installed as “Gentleman Usher” in the house. Meaning that he was essentially Catherine’s boss. (Warning, its going to get really bleak again.)

Though Dereham started affairs with other girls in the house, his attention soon turned to Catherine Howard. Once more, the young girl resisted and denied consent. Once more, she was ignored.

There are accounts of Dereham lifting Catherine’s dress past her navel so he could get a good look at her body, and it didn’t stop there: Dereham had a key that allowed him access to the quarters where Catherine and the other girls slept, and using this, he frequently “lay” with her.

Soon, the pair formed a relationship of sorts, Catherine allowing the affair to go forward under the promise that one day Dereham would marry her.

Dereham did not marry Catherine.

He eventually left, returning to Catherine’s life only when she became Queen, using their prior relationship as leverage to force himself onto her privy council – in doing so, helping to set up both their demises.

So I hear you say:

Fine….BUT didn’t Catherine lie about her past relationships AND THEN have an affair with Thomas Culpepper when she married to Henry VIII? You have to admit, that’s some poor decision making…

Look – there is no concrete evidence for an affair between Henry Vlll’s servant Thomas Culpepper and Catherine Howard. However, it is widely accepted that an affair of sorts probably did happen or would have happened eventually (yes, it is thatsuper vague and complicated).

For the sake of argument (and ease) let’s say the affair did happen – what does that say about Catherine’s decision making skills?

Look, you do not want to be married to Henry Vlll. Fact. He was a categorically crap husband, especially at this time of his life.

Prone to volatile outbursts and mood swings, he also had a scary amount of power at his disposal (hello, one executed wife and Thomas Cromwell, his most trusted advisor, beheaded on the same day as Catherine and Henry’s wedding!).

Now imagine being Catherine, a teenager with little experience of Court and a string of abusers behind you, now married to the King of England, who also happens to be a tyrant. I’d argue that’s a slightly precarious position.

Was Catherine finally about to get the knight in shining armor she might have wanted? Nope! Guess what – Thomas Culpepper was also a dick! Not just any dick though…he was a rapist AND murderer!

Prior to meeting Catherine, Thomas Culpepper was accused of raping a park keeper’s wife (while several of his men held her down) and then, when people from the local village tried to apprehend him for this crime, he murdered one of them – but don’t worry, Henry Vlll pardoned him for both the rape and the murder, because hey, boys will be boys.

Culpepper’s contemporary, George Cavendish, described Culpepper as violent, disorderly, and arrogant. So, essentially, an all-around stand-up gent. Yet Culpepper rose quickly at court, and soon became one of Henry Vlll’s most valued servants.

Around 1541, Culpepper started taking particular notice of Catherine Howard. This date is important because it is also when Francis Dereham blackmailed his way into being on Catherine’s privy council.

It is very likely that Culpepper caught wind of Dereham’s and Howard’s previous relationship (because Dereham had a fun habit of telling people all about it). And it’s also worth noting that around this time, the aging Henry Vlll fell very ill, and it was looking more and more likely that he might die.

So it’s more than arguable that Culpepper took all of this and used it to his advantage; using knowledge of Dereham’s and Howard’s sexual past to gain leverage to meet with the young Queen in private and start to position himself for power come Henry’s death (perhaps even as the former Queen’s new husband), through a mixture of flirtation and blackmail.

The dates fit in with this theory, as does the information we know about the kind of man Culpepper was.

When Catherine and Culpepper were arrested for their potential affair, both were quick to point the finger at the other. Culpepper admitted to intending to do “ill with the Queen,” but made it clear that Catherine Howard seduced him.

Catherine made a point that her servant, Jane Rochester, was in attendance at every private meeting she had with Culpepper, serving as both a guard and a witness.

If you’ve heard Jane Rochester’s name before, that’s because she was married to Anne Boleyn’s brother, George. Jane witnessed Anne’s downfall and it was suspected that she provided information that helped send her husband and sister-in-law to their deaths. So then why would Catherine put a potietial informant in prime place of witnessing treason, if she was the initiator of a sordid affair?

Then there’s the infamous love letter from Catherine to Culpepper. I’m inclined to agree with historian Retha Warnicke’s reading, which tells a tale of blackmail rather than passion. Catherine’s wording seems tense and desperate to placate Culpepper, particularly around the “promise” he has made her – most likely a promise to withhold information about her sexual history.

Catherine Howard was so much more than her historic portrayal, until now, has allowed her to be. And it’s important that as this new evidence and understanding of Catherine’s abuse is acknowledged, we don’t let history rebrand her, from “the slutty one” to “the tragic victim”: Catherine Howard was a victim of sexual abuse, but she was so much more than that. She was brave, determined and feisty. Thrust entirely unprepared into a perilous position, Catherine didn’t shrink away, but embraced it, learning from the Queens that came before her and shrewdly turning their mistakes into her road to glory. She learned how to manage a tyrant and, until her abusers caught up with her, it looked like Catherine would be the Queen that survived Henry VIII.

In a post-Me Too era, Catherine’s story not only needs to be told, but celebrated.

Tags: F Yeah History , history , Catherine Howard , Henry VIII , Jane Seymour
Support Feminist Media!
During these troubling political times, independent feminist media is more vital than ever. If our bold, uncensored reporting on women’s issues is important to you, please consider making a donation of $5, $25, $50, or whatever you can afford, to protect and sustain BUST.com.
Thanks so much—we can’t spell BUST without U.