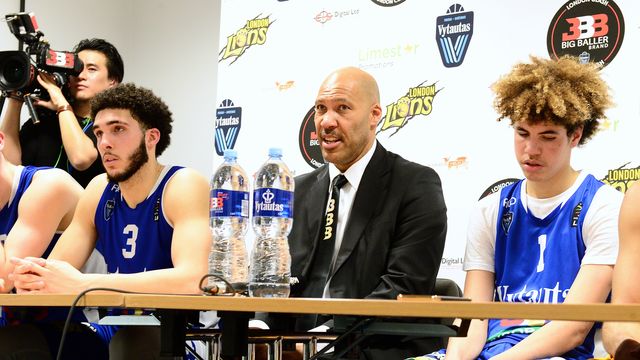 Sexism on television news is nothing new, unfortunately, and today, we’re rolling our eyes at LaVar Ball who should have known better than to continue this objectification of female reporters.

During a June 17 episode of "First Take" on ESPN, Ball, former NFL player and infamous father to LaMelo Ball, Liangelo Ball, and Lonzo Ball, addressed host Molly Qerim in a way that made our ears perk up — and not in a good way.

When Qerim asked Ball if she could “switch gears” with her questioning, Ball replied, “You can switch gears with me anytime!” Qerim’s face went into “I-can’t-believe-you-just-said-that” mode, but proceeded with the interview. You can also see her co-host Steven A. Smith have a similar reaction. At the end of the segment, she made a comment about “calling HR” afterward.

In a video posted to Twitter, Ball said, "Her mind in the gutter if she thinking something else. Only time I hit on her is if she's breaking into my house and I mistake her for the Boogeyman."

In an unsurprising statement to TMZ, Ball’s representative said he didn’t mean to be sexual. It reads: “[LaVar] was asked if he wanted to switch gears, in his mind switching gears was ‘changing the subject anytime’ and he said, ‘yes, you can switch gears with me anytime.’ At NO time was that intended or meant to be sexual in nature.” Hmm. See, the problem with this answer is I cannot see Ball saying this same comment if it was a male anchor he was addressing.

According to CNN, ESPN spokesman Michael Skarka said the sports channel has “no plans moving forward” with Ball. Yikes. Sucks to suck!

Sadly, this we’ve seen men being discriminatory toward anchors and journalists of the opposite sex not just on sports channels, but on major networks.

One of these instances I’ll never forget was in late 2016 when grade-A tool Tucker Carlson attacked Teen Vogue writer Lauren Duca for her piece, “Donald Trump Is Gaslighting America” on his show. He told her to “stick to [writing about] the thigh-high boots. You’re better at that,” right before ending the interview.

Similarly, in 2017 NFL quarterback Cam Newton was criticized for a comment he made to a female reporter at a press conference. Jourdan Rodrigue, a reporter for The Charlotte Observer, asked a question about the physicality of routes in the game, to which Newton smirked and said, “It’s funny to hear a female talk about routes, like, it’s funny.”

The more this happens in mainstream media, the more it is normalized for females to be objectified and not taken seriously. Whether there are female reporters with beats in sports or have duties in what was once a male dominated scene, it is imperative to notice the absence of equality in journalism. Men, do better.