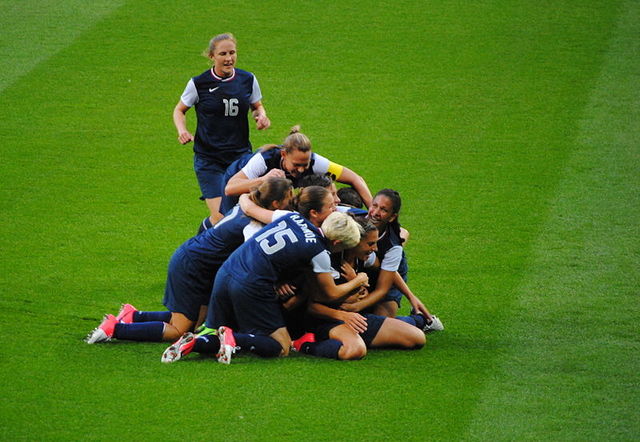 Even when the U.S. women’s soccer team triumphs—they just can’t win. At least not in the eyes of various sportscasters, commentators, and soccer diehards who claim there is a right (and wrong) way to win, criticizing the U.S. team for scoring too many times (a record-breaking thirteen!) and for celebrating too much as the goals tallied up. The discussion surrounding yesterday’s game has conflated so-called sportsmanship with gendered expectations of what it means to be “ladylike.” How dare “ladies” continue to score goals after they’ve already secured the win? How dare “ladies” show excitement after said goals? Don’t they know that “ladies” are supposed to win politely? To be seen, and not heard?

Those weighing in on the controversial domination of the Thai women’s team, scarcely try to hide the sexist undertones in their criticism. John Feinstein, a writer, offered his thoughts on Twitter, saying, the blowout “Reminds me of an old 'Peanuts,' in which Linus is telling Charlie Brown about a miracle touchdown to win a game and the celebration. CB says: ‘How'd the other team feel?’” Even during one of the most intense sports tournaments in the entire world, women are still expected to do emotional labor for the opposing team, while literally competing for a world title. Once again, women, first and foremost, encounter demands to empathize, before they are allowed to do anything else—play, win, or celebrate.

On the other hand, the idea that the Thailand team can’t handle defeat is infantilizing and misogynist. Obviously it sucks to lose, but tears, disappointment and sadness are common in World Cup losses across the board. The Thai team is not especially weak or emotional and can certainly manage what happens in every, single sport—you lose. You can’t play sports without being well-versed in what it’s like to lose, and while it may be disheartening, the Thai team is more than capable of getting back up for game two. Not only do claims highlighting the emotional vulnerability of the opposing team under-estimate the strength of Thai women’s soccer, but they also inaccurately channel blame towards the U.S. soccer women players, instead of drawing attention to the institutional failure of FIFA to allocate enough resources or support for developing leagues. It is more productive to draw attention to the deprivation of certain sports teams within a system known for exploitation, than to fault the women who are literally just playing the game.

The double standard we have when it comes to winning and celebrations by women and men’s teams, demonstrates sexism in the critique, where the winning itself isn’t the problem, but that doing so while being a woman is not okay, as any display of female aggression or competitiveness becomes an immediate disqualifier. While it’s hard to find many examples where the U.S. men’s soccer team won by a large margin, the U.S. Men’s Basketball Team beat China in their opening game at the 2016 Summer Olympics, with a final score of 119-62, and defeated Nigeria in 2012 by a whopping 83 points (156-73). In the conversations following those games, the focus did not concentrate on a debate about sportsmanship, or lack thereof, but on the powerhouse squad of NBA all-stars who hoped to take home the gold.

Many sports aficionados claim that it is common, particularly in soccer, for dominating teams to hold back from completely annihilating the opposing team, when the win is already guaranteed.  Within soccer culture, this is typically considered good sportsmanship, and it often happens where the winning team will pull back, and kick the ball around midfield to run down the clock, without making many aggressive advances to score. However, the key word here is “typically.” It’s not completely out of the ordinary for a team to play past the bare minimum needed to win, with Germany beating Argentina in 2007 with a score of 11-0. The U.S. Women’s team did not break any technical soccer rule in their game against Thailand, but challenged some sense of what is the socially acceptable standard for behavior while playing. In doing this, many believed the U.S. team acted “classlessly,” according to the New York Post.

Believe it or not, it was actually important for the U.S. team to do as well as they did. Not only do goal differentials break ties in determining who advances to the knockout rounds, but the U.S. team is bound to face fierce competition in the upcoming games, including the second-ranked team, France, in the quarterfinals, if both teams make it that far. It is important for the U.S. team to gain momentum as they prepare to play against some of the toughest competition in the tournament. Additionally, this U.S. women’s team has to work hard, not only to prove themselves as the best women’s team, but must also prove themselves as deserving of equal pay as their male counterparts. The pressure is certainly on, but if the U.S. team has made one thing clear, it’s that they will not back down in the face of sexism, whether it’s coming from Twitter critics or the U.S. Soccer Federation, itself.

Tags: sexism , women , soccer , feminism , sports , twitter
Support Feminist Media!
During these troubling political times, independent feminist media is more vital than ever. If our bold, uncensored reporting on women’s issues is important to you, please consider making a donation of $5, $25, $50, or whatever you can afford, to protect and sustain BUST.com.
Thanks so much—we can’t spell BUST without U.