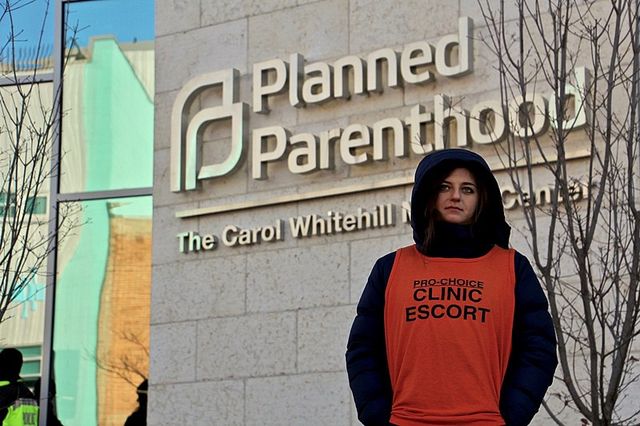 Missouri is continuously attempting to eviscerate legal abortion access in the state despite the temporary non-closure of their last clinic providing such services, a Planned Parenthood in St. Louis. How are they doing this, exactly? Through a series of legal requirements aimed at making the process of getting an abortion as difficult and uncomfortable as possible. The latest addition to this targeted attack on reproductive rights is a mandatory, a.k.a nonconsensual, pelvic exam to be given to every patient before the 72-hour waiting period conditional for an abortion in Missouri. The timing of these invasive and medically unnecessary examinations are deliberately intended to traumatize those seeking to end their pregnancy right before a three-day-long "punitive" waiting period, in which the government forces women to take time to reconsider what is already, for many, an incredibly difficult decision.

What's telling about the requirement imposed on the sole surviving clinic in the state is that it isn't even a result of the so-called moral or ideological claims attached to the pro-life movement, but rather the product of the increasingly political licensing battle with the clinic itself as Missouri's government attempts to make abortion inaccessible statewide. On May 22, Planned Parenthood agreed to comply with state regulations enforcing pelvic exams, which Missouri’s health department claims “could increase the safety of the procedure,” according to The Mercury. Could.

On the other hand, Dr. Amy Addante, an actual physician in the St. Louis clinic that provides abortions tweeted on June 3, that she “was forced by the state of Missouri to perform an unnecessary pelvic exam on a patient...She is heartbroken over her situation, and I was forced to do an invasive, uncomfortable exam. It broke me as a physician to do this to her.” Call me crazy, but I’m in favor of trusting a licensed physician with years of experience as an OBGYN over a hyper-politicized, male-dominated Republican state government that has consistently proven itself to not give a shit about women (i.e. the eight-week abortion ban passed by Governor Mike Parson). If she says that these pelvic exams to jack shit besides intimidate, and harm everyone involved, I believe her.

Let’s be clear about exactly what’s happening here. Dr. Colleen McNicholas, an obstetrician at the St. Louis Planned Parenthood chapter, puts it best, telling Rachel Maddow that “we either have to ask patients to subject themselves to a state-sanctioned, essentially, sexual assault, or they can’t have an abortion here in Missouri.” This ultimatum set by the government requires that women, who often have histories of trauma and assault, go through examinations that could potentially retraumatize or trigger them. It also forces doctors to knowingly and unwillingly violate their patients in order to be able to provide their services.

For many women, the idea that the government is wielding its power to directly harm women in this very moment (not after some undetermined court case, but now) to further their political agenda is entirely sickening and extremely upsetting. And as someone who has been sexually violated and is still working through what I’ve experienced every day, I don’t think I’d be able to put myself through that again and get an abortion. And although I’m lucky, because I live in a different liberal state that, as of now, protects my reproductive rights, I know that—because I’m having this heart-racing, sticky, nauseous feeling even at the idea of it—there are people in Missouri feeling how I’m feeling, and going through it in real time.

As much as this particular case of mandatory physical invasiveness is appalling, it’s important to remember that non-consensual pelvic exams on anesthetized and unconscious patients are shockingly common, legal in all but five states. While this widespread disregard for women’s autonomy over their own bodies is incredibly depressing, we must not be paralyzed by fear or anger, but actively work to fight back. In St. Louis, protests have erupted in response to restrictive abortion laws and the efforts to close the final clinic. In bordering states, like Illinois, abortion providers, including the Hope Clinic, just twenty minutes away from St. Louis, have been preparing for the influx of patients from Missouri. Even those of us all across the country can help by donating to Missouri’s only abortion clinic, to Planned Parenthood, the Gateway Access Fund, and the ACLU, who are all fighting to challenge the state government’s restrictions.

Finally, do your part and vote out Republican representatives who are against a person’s right to choose. And for fuck’s sake, vote out the President who promotes a culture of violence and control over women and their bodies.

I Should Have Been Aborted, And I'm Fine With That