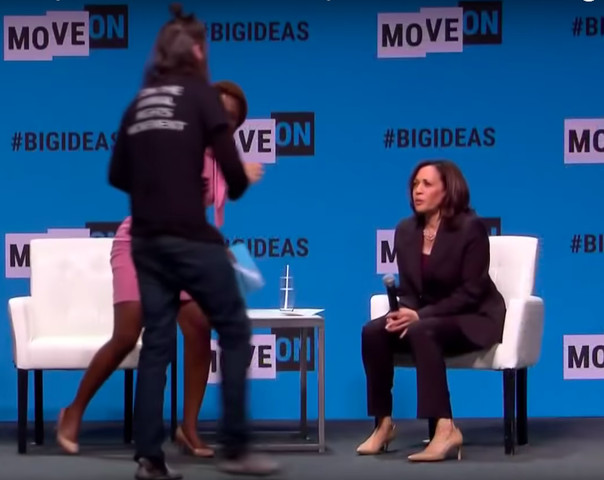 Of the fourteen presidential candidates who spoke at the California Democratic Convention in San Francisco this past weekend, Kamala Harris, the only black woman, was also the only person to be interrupted on stage - by a man-bun-clad white man, who grabbed the microphone from her just as she was about to discuss the gender wage gap, no less. To make light of a serious breach of security for one, brief moment, let me just say that this is the least surprising turn of events since the unfortunate rise of the man bun itself, and that I only hope I may someday achieve the level of self-love these men have for their luscious, luscious locks.

On a more serious note, the video below raises concerns about the nature of male entitlement, creating a genuine safety risk to the only black woman in the presidential race. The clip shows animal rights activist, Aidan Cook, walking quickly up to Senator Harris and grabbing the microphone from her as she is about to speak. Cook proceeds to follow Harris as she moves to the opposite side of the stage, talking of her own “bigger idea,” before being confronted by security.

Kamala Harris moved away from Cook, reclaiming a personal space that he had nonchalantly violated, only to do so again by pursuing her as she walked away. The disrespect of Harris’ right to bodily autonomy and, by extension, the disregard for women’s control over their own space and who has access to it, is all too pervasive. When Cook, or any man, aggressively moves towards Harris or others, he carries with him histories of trauma and cultures of violence towards women - all of which flash by in a paralyzing moment of fear.

It should be noted that Harris, while obviously startled (as anyone would be), remained extremely calm and took charge of her own safety by moving away Cook. I, on the other hand, literally peed my pants yesterday (just a little), because a toddler surprised me by bumping into me on the sidewalk. It’s fair to say that while Senator Harris never should have had to respond to a situation like that, she handled it, dare I say, presidentially, and maybe even more importantly, like the strong woman we know her to be.

While Aidan Cook claims to have targeted Harris for the sole reason that she is a California senator, the racial and gender dynamics of this interaction cannot be ignored. Cook’s disregard for Harris’ well-being cannot be separated from his male privilege. He asserts his agenda over that of Harris’, declaring his idea to be “bigger” (aka more important) than the Senator’s plan to increase gender parity in wages. He might as well have gone on stage and said, “Let me mansplain gender equality to you. It starts with the animals.” That would have at least avoided the soft boy tactic of pretending to be respectful in order to thinly disguise an oppressive self-righteousness. Sorry, Cook, but you’re not successfully gaslighting anyone today - your leftist stance on animal rights does not excuse your blasé attitude towards the importance of a woman’s opinion on an issue pertaining to, in fact, women.

Further, this exchange exemplifies the epitomé of white privilege, where even a presidential candidate cannot get through a conversation without a white man asserting his own agenda and so-called expertise, just because Harris is a black woman. Because, who needs fifteen years of political experience, a J.D., and three honorary degrees on your resumé when you are a man with a bun? Of course, Senator Harris’s professional accolades do not make her more deserving of the time and space to express her opinions than any other black woman. This issue extends beyond this particular incident to a culture that delegitimizes the authority, capabilities and intelligence of black women - devaluing their voices, safety, and overall place in the world.

It is also important to recognize that this is not the first time Kamala Harris has been publically interrupted by white men. As a member of the Senate Intelligence Committee, Harris was cut off multiple times during the hearings for Rod Rosenstein and Jeff Sessions by Senators, Richard Burr and John McCain. It’s no secret that white men will try to silence black women like Harris, attempting to preserve their own power within gendered and racial systems of oppression, however, we cannot continue to let these men suppress those like Kamala Harris just because they enjoy hearing the sound of their own voices. Big shout out to one of MoveOn’s moderators, Karine Jean-Pierre, who confronted Cook and blocked him from Harris. But black women cannot be the only ones to stand up for black women. As allies we have to show up and actually support Kamala Harris, and all black women, when things like this happen. Just don’t grab the mic and steal the show.

Kamala Harris Announces She Is Running For President in 2020