Details
BY Emma Davey
IN Feminism
Published: 22 May 2019 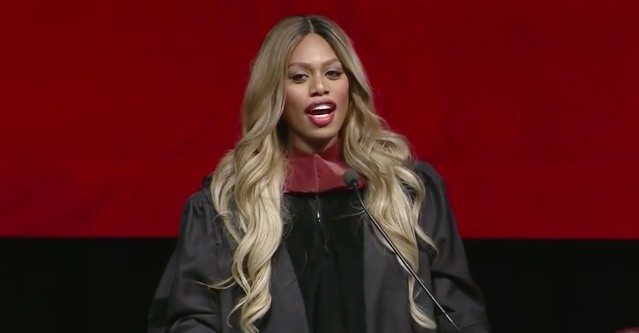 Actress, activist, and all-around badass Laverne Cox recently gave the commencement speech at Pitzer College. In the wake of recent draconian anti-choice laws being passed in places like Alabama and Georgia, Cox recounted her experience of engaging in pro-choice activism online. After she retweeted the message “Woman’s body. Woman’s right to choose. End of story” on her Twitter account, many of her followers challenged the language she used, feeling that it wasn’t inclusive of trans men.

Thank you for this. This discussion has brought up much for me that I am processing. https://t.co/1rxbllLS5f

Recounting this story in front of the graduating class, Cox recalls her initial reaction to being challenged.

Cox then goes on to discuss how she eventually started to change her thinking upon reflecting more about what it means to be empathetic.

Language around abortion can be tricky. The concepts of women’s rights and abortion access are often synonymous with each other, for obvious reasons. Reproductive rights are tied into distrust about women controlling their bodies, and ergo, controlling their own livelihoods. But it’s important to realize how the patriarchy affects more than just women, and we need to include trans and non-binary folks in our activism. Though having access to safe and legal abortion is an important aspect of reproductive rights, there is more to it than that. In an article written for Everyday Feminism, KC Clements talks about how we can extend our conversations about reproductive rights to include the transgender community:

“Trans people face specific issues when it comes to our reproductive health. For instance, for those of us who do choose to pursue hormone replacement therapy, we face potentially damaging effects on our reproductive organs. In most cases, testosterone causes the ovaries to cease function and bleeding to stop, while the use of estrogen and testosterone blockers reduces or eliminates sperm. While it is possible to reverse these effects by ceasing hormone replacement therapy, in some cases sterilization can be permanent.

This is just one of several examples that Clements offers. They also mention acknowledging the long history of forced sterilization being used against women of color and recognizing that sex work is work. All in all, the way Cox responded to being called out is a good example of how to handle situations like that. She owned up to her mistake and listened to what other people had to say. Just one of the many reasons that we love Laverne!

Tags: Laverne Cox , Pitzer College , commencement , transgender visibility
Support Feminist Media!
During these troubling political times, independent feminist media is more vital than ever. If our bold, uncensored reporting on women’s issues is important to you, please consider making a donation of $5, $25, $50, or whatever you can afford, to protect and sustain BUST.com.
Thanks so much—we can’t spell BUST without U.