Details
BY Kat McQuade
IN Feminism
Published: 20 May 2019 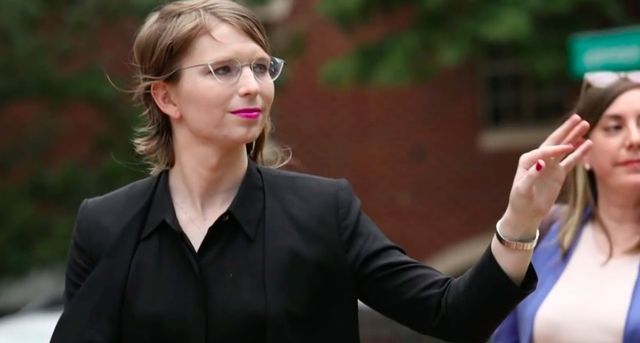 Transgender activist and former Army data analyst Chelsea Manning has been jailed again for refusing to testify before a Virginian grand jury. Manning was jailed back in March for refusing to testify before a grand jury investigating WikiLeaks. Jailed for 62 days, nearly half of which was spent in solitary confinement, Manning was just released on May 9th after the grand jury expired. After her initial release, she took to social media, explaining her refusal to cooperate with the grand jury:

“Good evening. Two months ago, the federal government summoned me before a grand jury in the Eastern District of Virginia. As a general principle, I object to grand juries. Prosecutors run grand juries behind closed doors and in secret, without a judge present. Therefore, I declined to cooperate or answer any questions. Based on my refusal to answer questions, District Court Judge Hilton ordered me held in contempt until the grand jury ended. Yesterday, the grand jury expired, and I left the Alexandria Detention Center. Throughout this ordeal, an incredible spring of solidarity and love boiled over.

I received thousands of letters, including dozens to hundreds of them a day. This means the world to me, and keeps me going. Jail and prisons exist as a dark stain on our society, with more people confined in the U.S. than anywhere else in the world. During my time, I spent 28 days in solitary confinement–a traumatic experience I already endured for a year in prison before. Only a few months before re-incarceration, I received gender confirmation surgery. This left my body vulnerable to injury and infection, leading to possible complications that I am now seeking treatment for. My absence severely hampers both my public and private life. The law requires that civil contempt only be used to coerce witnesses to testify. As I cannot be coerced, it instead exists as an additional punishment on top of the seven years I served.

Last week, I hand-wrote a statement outlining the fact I will never agree to testify before this or any other grand jury. Several of my closest family, friends and colleagues supported this fact. Our statements were filed in court. The government knows I can’t be coerced. When I arrive at the courthouse this coming Thursday, what happened last time will occur again. I will not cooperate with this or any other grand jury. Throughout the last decade, I accepted full responsibility for my actions. Facing jail again, this week, does not change this fact. The prosecutors deliberately place me in an impossible situation: I either go to jail, or turn my back on my prisons. The truth is, the government can construct no prison worse than to betray my conscience or my principles. Thank you, and good night.”

Thursday night, Manning was jailed again and faces up to 18 months in custody. If she continues to refuse to testify, she will be fined $500 every day after 30 days of confinement. After 60 days, she will be fined $1000 a day. Manning had been subjected to human rights abuses for seven years due to her involvement with WikiLeaks in 2010, where she passed along 720,000 classified military documents to the site. She will likely face poor treatment again in the William G. Truesdale detention center in Alexandria, VA. While in prison for her involvement in WikiLeaks, Manning attempted suicide and was placed in solitary confinement as punishment. Many psychologists consider solitary confinement to be a form of torture. Former President Barack Obama commuted her 35 year sentence in 2017.

In Alexandria, Manning told Judge Anthony Trenga that she would “rather starve to death” than testify before the grand jury. She has continued to insist that she will not cooperate with the grand jury, yet the Judge and jury will not relent. Stuck in a stalemate with the grand jury, Manning has criticized jails and prisons as “dark institutions. Despite that,” she said, “it doesn’t frighten me or disturb me. […] I’ve already been to jail. I’ve already been to prison, so attempting to coerce me with a grand jury subpoena is just not going to work.” Manning went on the say that the prosecutors have placed her in an impossible situation: go to jail or go back on her core values.

The system has repeatedly failed Manning. From horrific accounts of the human rights abuses she faced in her seven years in prison to her current predicament, the American government continues to specifically target Manning for her subversiveness. Despite the government’s attempts to keep her down, she continues to challenge injustices in the prison system, society, and the government itself. While Manning’s fate remains uncertain, one thing is indisputable: she won’t go down without a fight.