Details
BY Emma Davey
IN Feminism
Published: 15 May 2019 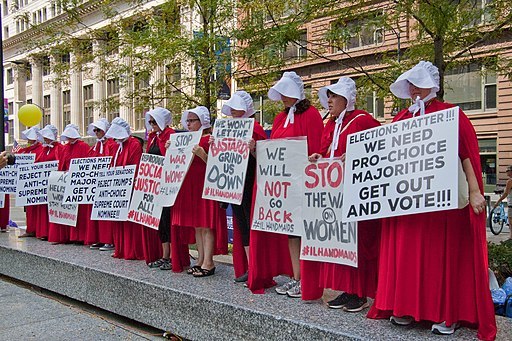 The Alabama state legislature recently passed a bill that bans abortion in all cases, except for the mother’s life being in jeopardy. The bill makes no exceptions for cases of rape or incest. Rapists and guns in this country are offered more legal protection than women. The law also means that “any physician who performs a successful abortion could be charged with a Class A felony and face up to 99 years in prison” according to Vice.

As The Guardian reports, “The Alabama law will disproportionately affect black and poor women, because they are more likely to seek abortions, and less likely to have resources to obtain an abortion out-of-state.”

Remember, the ban isn’t in effect just yet, it will start 6 months after Gov. Kay Ivey signs the bill. While the bill is very clearly meant to serve as a legal challenge to Roe v. Wade (anti-choicers are chomping at the bit for a case to be heard by the Supreme Court), the constitutional standard of abortion access in this country has long been Planned Parenthood v. Casey. Decided in 1992, the constitutional standard of abortion is that states can pass laws regulating it, so long as they do not create an undue burden on the pregnant person.

Didn’t we just do this? Didn’t you, dear BUST reader, just read multiple articles about abortion restrictions in Georgia and Ohio? The bill that recently passed in Georgia, HB 481, criminalizes abortion with the potential penalty of life imprisonment or the death penalty. Real fucking sound logic you got there, illegitimate governor Brian Kemp. HB 481 effectively establishes a fetus as a “living, distinct person” entitled to “full legal recognition.” As Slate reports, “Even women who seek lawful abortions out of state may not escape punishment. If a Georgia resident plans to travel elsewhere to obtain an abortion, she may be charged with conspiracy to commit murder, punishable by 10 years’ imprisonment.”

Many fear that these laws open up the possibility of women being punished for having a miscarriage. In a New York Times piece entitled “Why Politics Should be Kept Out of Miscarriages,” Aaron E. Carroll writes: “One definition of second-degree murder in Georgia includes cruelty to children during which ‘he or she causes the death of another human being irrespective of malice.’ This raises the question of whether a woman who miscarries because of what is perceived to be her conduct could be held liable for that conduct.” Miscarriages are normal, especially in the early stages of a pregnancy. A law like this makes it possible that a heartbreaking event in a family’s life could be subject to criminal scrutiny and an emotionally exhausting investigation into how much “blame” the woman should shoulder. Did she have a few glasses of wine while pregnant? Did she exercise too much? Did she not eat healthy enough? We’ve already seen women punished for miscarriages. Nothing suggests it won’t happen again.

If you’re a man, now’s the damn time to speak out. It’s been the damn time to speak out. Check in with your female friends. They’re probably feeling pretty fucking exhausted by now. Ask yourself how you can use your power and privilege to amplify those voices around you. Consider signing up to be a clinic escort or at least showing up to pro-choice events in your area. Talk about this on social media. Donate to your local abortion clinic. This is advice that goes for everyone, but male apathy is killing women. The 25 men who voted for this bill sure as shit don’t care about women. I’m not about to let dinguses named Shay Shelnutt or Garlan Gudger (surprisingly NOT characters from a Roald Dahl book, but real actual Alabama politicians) make decisions about my body.