Details
BY Francesca Volpe
IN Feminism
Published: 07 May 2019 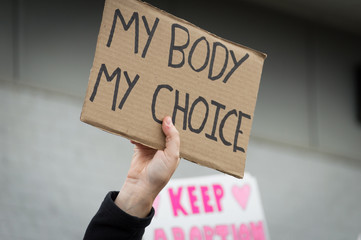 On Tuesday, Georgia Governor Brian Kemp passed what’s known as a “fetal heartbeat” bill, a law banning abortion once a heartbeat can be detected, often as early as 6 weeks. Georgia is the fourth state to enact the “heartbeat” bill into law, following Ohio, Kentucky and Mississippi. Considering most women are unaware they are pregnant, within the first few weeks of pregnancy, heartbeat laws suggest a near-outright ban on abortion. Dr. Krystal Redman of Spark Reproductive Justice Now told Vox, “It’s basically a forced pregnancy bill. It’s a health care ban bill.” The increase of heartbeat bills this past year is a clear indication that abortion opponents are desperate to abolish Roe. v. Wade.

As reported by Vox, heartbeat bills are based on model legislation written by Faith2Action, a Christian organization that claims to be “the nation’s largest network of pro-family groups.” Their website FAQ states, “while not the beginning of life, the heartbeat is the universally recognized indicator of life.” The model legislation says that if a patient requests an abortion, a doctor must use “standard medical practice” to see if the fetus has a heartbeat. If a heartbeat is detected, the doctor is forbidden from conducting an abortion, unless the procedure is medically necessary to save the patient’s life or “to prevent a serious risk of the substantial and irreversible impairment of a major bodily function.” Even more disturbing, situations involving rape or incest are not exempt under the bill. “No other law allows for the killing of an innocent child for the crime of his or her father,” states the Faith2Action website.

Such simplistic and glib rhetoric, popular amongst pro-life groups, becomes all the more ludicrous and dangerous considering recent reports of an Ohio man raping and impregnating an 11-year-old girl, who now must carry the fetus to full term because of Ohio’s new heartbeat bill. This young girl’s case prime example why heartbeat bills should have never been introduced. The lifelong trauma this 11-year old child will have to cope with is a result of irresponsible legislation that aims to diminish women’s bodily and biological agency.

While Georgia's heartbeat bill does include exceptions for rape and incest, the state has some of the highest rates of maternal mortality in the country. The new heartbeat law will inevitably hurt patients, especially black, queer and low-income individuals who are statistically more likely to seek abortion care. Furthermore, criminalizing abortion forces medical professionals to consider the bounds of the law before the health of their patient, consequently putting the patient’s safety at risk. I’ve said it before when Ohio passed its heartbeat bill and I will keep saying it: criminalizing abortion DOES NOT STOP ABORTIONS. But it does prevent safe abortions.