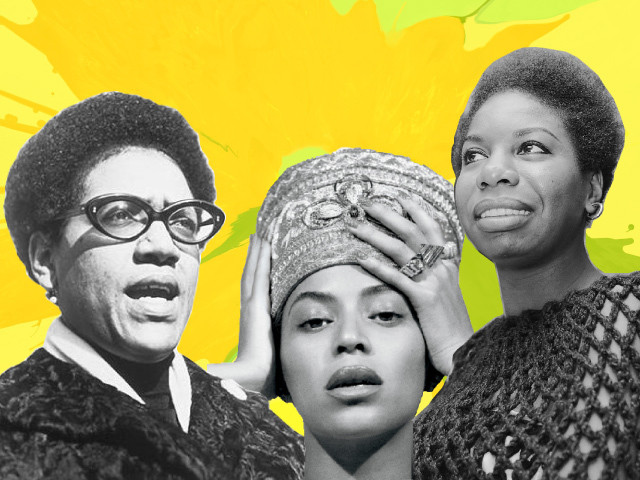 I’M A WHITE GUY from a small, conservative town in Utah. I know I’m an extremely unlikely, and possibly inappropriate, messenger of Black feminist principles, even if and when they guide my own work. But I also believe there exists the possibility for some important and useful connections through sharing my story. Let me tell you just a little more:

I was raised Mormon, though since happily excommunicated from the church. I never felt like I belonged, and I didn’t have words to describe what I was feeling for years: I was/am gay, queer, everything I was expected not to be. I turned to books, music, and pop culture desperate for perspectives that countered the white, straight, conservative, male narrative that I was drowning in in my hometown. And I finally found comfort and inspiration in the work of Black women, on the radio and in my city library. Not because my experiences were practically similar to theirs, but because I recognized a common feeling of being “other,” alongside a demand for the world to expand to include those pushed to the margins on all levels. I immediately wanted to be as brave as the books and music I encountered and studied them voraciously.

I found courage to challenge the sexist, racist, and homophobic views of the Mormon church because I read Alice Walker, Audre Lorde, and Zora Neale Hurston; because I heard Janet Jackson, Mary J. Blige, and ultimately the Queen Bey herself, Beyoncé Knowles-Carter. And so many others. Over more years (and graduate degrees), teaching and writing became viable ways to share this life-changing information I’d encountered and continued to study. So much so that I created a course based around Beyoncé’s music and Black feminist history in 2010, always centering Black women’s voices—now a book, Ain’t I a Diva?: Beyoncé and the Power of Pop Culture Pedagogy (6/11). I write and teach today because I want others to take seriously the notion that when Black women get free, we all get free. It’s my overarching guiding principle.

In that spirit, I wanted to share some of the other foundational Black feminist lessons and principles central to my own teaching, writing, politics, and living.

In Lorde’s essay “Age, Race, Class, and Sex: Redefining Difference,” she states, “Certainly there are very real differences between us…But it is not those differences between us that are separating us. It is rather our refusal to recognize those differences, and to examine the distortions which result from our misnaming them.” Lorde’s words remind me to always foreground difference, not ignore it; to search for the true names of our differences. Speaking honestly and openly about those differences, naming various power and privileges, makes it impossible to ignore that we’re all different on one level or another. We’re all entirely unique, yet living together in this world. The fact of our undeniable differences ironically gives us something in common. And that’s a necessary place to start.

Similarly, in hoping for a better world—one in which we’re fighting together to eliminate racism, sexism, homophobia, and all the other violent systemic oppressions people face, we share a common goal. On Rhythm Nation 1814, Janet Jackson pledges: “We are a nation with no geographic boundaries / Bound together through our beliefs / We are like-minded individuals / Sharing a common vision.” Foregrounding that vision helps break down the artificial boundaries separating us. It doesn’t erase or downplay the very real differences that exist, but it continues the search for Lorde’s more correct naming in the links, the ties, the beliefs that bind us together and create an army: a formidable force to be reckoned with.

An army might also be considered a congregation. If bound together through a common vision, we are also constantly informing one another. Formal distinctions between “teacher” and “student” cease to exist. In Octavia Butler’s Parable of the Sower, Lauren Olamina creates a new religion focused on the concept of Change. “All that you touch, you change / All that you change, changes you,” or so says the central scripture of Olamina’s religion, Earthseed. In accepting the inevitability of change, Butler suggests that we are also working to dismantle traditional power dynamics and look for communal solutions, blend the leader into the group. So, reciprocity in the classroom is of the utmost importance, alongside an even distribution of authority; we’re all students and teachers alike. We’re all changing others and being changed, touching and being touched and spinning into the future.

Speaking of Earthseed, Alice Walker repeatedly turns readers’ attention to the earth itself. To the land and the violent colonization of ground we stand on. We are not only linked to one another through shared beliefs, but linked and bound to the earth and the blood soaked into dirt. We must recognize those connections on this even deeper level to begin healing. Though Walker’s work is often brutal, she always highlights the possibility of redemption. Healing our relationships with one another is contingent upon healing our relationship to the earth and whomever was here before us. Walker’s concept of God, from The Color Purple and The Temple of My Familiar to her more recent Taking the Arrow Out of the Heart, shares a notion of vulnerability with Butler; though this time not being shaped by change, but rather honoring a critically wielded love—of oneself, those around us, the earth, even our enemies.

Love isn’t about roses, chocolates, or pastel candy hearts. It’s difficult and sometimes a bloody battle. We need to demand better of the world and others if we believe in a more equitable society and that demand is necessarily messy, though no less full of love. In “Civil Wars,” June Jordan states, “The purpose of polite behavior is never virtuous. Deceit, surrender, and concealment, these are not virtues. The goal of the mannerly is comfort, per se.” Nothing changes when everyone stays comfortable. No one learns a damn thing until the borders of their comfort zone are challenged, especially those in privileged positions. And, there’s no lack of joy, openness, possibility, and yes, love, in Jordan’s poetry and writing either. Jordan highlights that real love and joy are often uncomfortable—because in the discomfort, we learn and change as people.

Even though love may not be as easy or breezy as the conventional notion suggests, Nina Simone reminded listeners that it was time to leave the table when love was no longer being served in her song “You’ve Got to Learn.” A lesson I hold in constant tension. What is the utility of any conversation? Is this a conversation I can respectfully participate in, given my identity? What are the stakes of everyone involved and do we share common goals? Are all participants truly searching for a solution in good faith? Is the discomfort created productive and constructive? Questions like these that stem from Simone’s lesson can help decide whether an interaction is useful or just energy that could be better utilized elsewhere.

“Who needs a degree when you’re schoolin’ life?,” Beyoncé sings in a 2011 bonus track to 4. Degrees are expected upon graduation, but as an educator, I find it essential to question even the value of education itself. Degrees are credentials bestowed on individuals by institutions; they say nothing about what a person knows and how they navigate life. “Schoolin’ Life” is not just a song, but a guiding principle for me because it highlights all information as valuable; knowledge comes from all places, not just the Ivory Tower. Real life teaches just as much as any book one might read; it’s not just research but listening to others that counts. “Experts” come in all shapes and sizes. It’s about collapsing the divide between theory and practice, never judging any particular methods, and spreading “expertise” around.

Florynce “Flo” Kennedy embodied “schoolin’ life.” She was a lawyer and anti-establishment activist hellbent on speaking truth to power, damn the consequences. “You’ve got to rattle your cage door. You’ve got to let them know that you’re in there and that you want out. Make noise. Cause trouble. You may not win right away, but you’ll sure have a lot more fun.” She insisted on having fun and creating “unlikely coalitions”—groups of people from multiple identities that came together through the pleasures of protest, the enjoyment of fighting for a better world. Like she said, change may be slow, but fun will fuel the journey. Perhaps more than any voices, I keep Kennedy’s words close to my heart, hope that my teaching creates that same kind of fun—though still critical and rigorous—in the classroom and that students continue to pass it forward. In the terrible political climate we all live in today, we could all use more fucking fun.

Solange On Intersectional Feminism And "A Seat At The Table": BUST Cover Story

Kevin Allred is a writer, speaker, and educator based in Brooklyn. His work has been featured at NBC News, INTO, HuffPost, Salon, and more. He created the course “Politicizing Beyoncé” in 2010 at Rutgers University and his book Ain’t I a Diva?: Beyoncé and the Power of Pop Culture Pedagogy will be released 6/11/19 from the Feminist Press.

Tags: Kevin Allred , Beyoncé , Ain’t I a Diva?: Beyoncé and the Power of Pop Culture Pedagogy , The Feminist Press , Janet Jackson , Audre Lorde , Octavia E. Butler , Alice Walker , June Jordan , Nina Simone , Flo Kennedy
Support Feminist Media!
During these troubling political times, independent feminist media is more vital than ever. If our bold, uncensored reporting on women’s issues is important to you, please consider making a donation of $5, $25, $50, or whatever you can afford, to protect and sustain BUST.com.
Thanks so much—we can’t spell BUST without U.