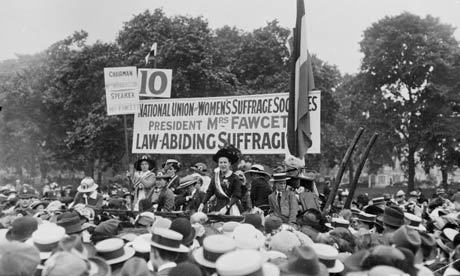 Think votes for women and you think Pankhurst’s, you might think fearless suffragettes risking everything, committing violent acts to win the day.

And you would be wrong.

Well, this is awkward...

Okay, fine, not entirely wrong, but you would only be seeing about 10% of the picture. Women’s suffrage was a fight that had been going on since the early Victorian period, decades before the suffragettes were formed – it’s a battle that’s largely been forgotten, but thanks to some badass feminists and historians, that’s all changing!

So how do you get up to speed with this unsung era of history? Well, there’s no better place to start than Millicent Garrett Fawcett. 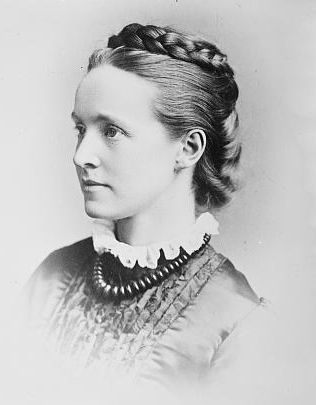 Feminist hero and queen of the updo.

Millicent was born in 1846, one of the youngest of 10 (yep, that’s right—10!). She was raised right, taught to think for herself and pursue her passions.

When Millicent was 12, her older sister Elizabeth moved to London to study medicine (FYI- Elizabeth went on to become Britain’s first female doctor – you will soon learn that these sisters had badassery hardwired in their genes). It was whilst visiting Elizabeth in London that the young Millicent had her first brush with the women’s rights movement.

Elizabeth introduced her younger sister to Emily Davies, a fervent campaigner for women’s rights. Soon, the two friends descended into talk of overcoming gender barriers in education (Emily) and medicine (Elizabeth), deciding that it was only after achieving equal rights in fields like these that women would be able to fight for the vote. Then, as if as an afterthought, the women turned to Millicent and Emily said:

"YOU ARE YOUNGER THAN WE ARE, MILLIE, SO YOU MUST ATTEND TO THAT.”

But attend to it Millie did. She threw herself into reading up on the law and female rights. She went to a talk given by radical MP John Stuart Mill in favour of women’s rights and became his ardent supporter…she did all this before she was 19, and she wasn’t done.

Now, let’s pause for a moment and think about what your life’s greatest achievement at 19 was. I’ll admit that working out jägerbombs do not a good evening make is an achievement. But it’s not got shit on 19-year-old Millie.

Because in 1866, she delivered a petition to Parliament calling for women to have the vote.

That’s right. At 19, Millicent kickstarted things, with the first official move in the loooong battle for equal votes.

Yep, it's both amazing and sickening. via Giphy.

Having fired the opening shot, Millicent was keen to continue her campaign. She started writing and working at getting more politically active. Then, in 1867, she met Henry Fawcett, a radical liberal MP and scholar. The two had a lot in common, and Millicent felt like she had met a kindred spirit, even though Henry was a decade older than her and was also newly blind.

Against everyone’s wishes, the pair married, with Millicent helping Henry come to terms with his new disability and with Henry supporting Millicent as she found her feet in politics. 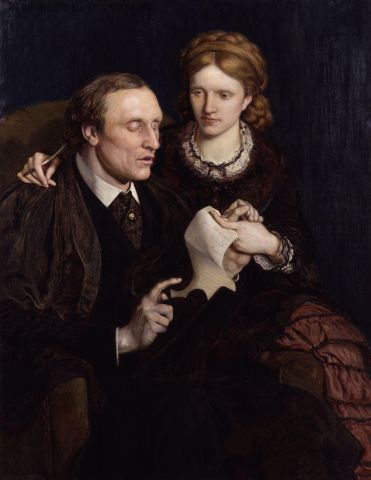 As  part of Millicent’s effort to get women's right to vote into the public consciousness, she gave her first speech in 1869. She hated every moment of it.

But without any real mass media to spread the word on women’s suffrage, she didn’t really have a choice. So Millicent fought through it: chucking herself into the deep end, she went on a speaking tour in 1871. She kept pushing through and eventually became one of England’s most popular and passionate public speakers.

Whilst overcoming her fears, Millicent published several in-depth political and economic books and founded Newham College, Cambridge – you know, as you do. A boss at multitasking, she also found time to give birth and raise a daughter, Philippa (who went on to become an acclaimed mathematician and educator, BTW).

Everything was coming up Millicent, and she was fast becoming one of the most vocal proponents for women’s rights in the world; her husband, Henry one of the most loved and respected figures in British politics (not an easy feat, being a liked politician!). It seemed nothing could stop this power couple.

And then Henry died.

But Millicent persisted. Now a single mother, she buckled down on women’s rights. Soon becoming the clear figurehead for the movement in the U.K., Millicent fought for the campaign to seek more than the vote, fighting for women’s sexual rights, working rights, and so much more.

In 1897, she helped form the NUWSS (The National Union of Women’s Suffrage Societies, also known as the suffragists), bringing the majority of the country’s women’s rights groups together and making their collective voice even louder. 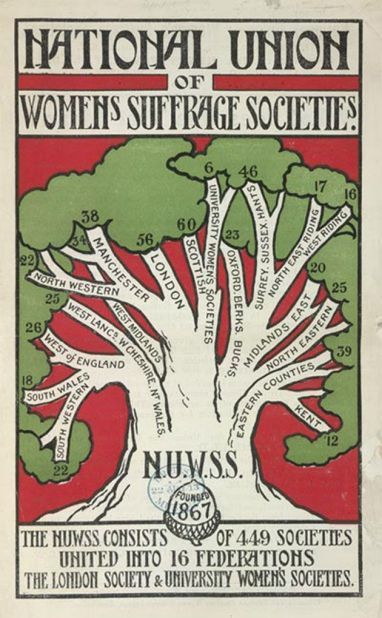 Though the Suffragists’ means were peaceful, that didn’t mean Millicent couldn’t get militant.

She had an active role in the Personal Rights Association, who sought to shed light on men with, er, nefarious intentions when it came to young women. Once throwing flour at a seemingly untouchable Army General who had been sexually harassing a maid, Millicent then pinned a sign to his back which outlined his deeds and sent him packing down a crowded street of onlookers (because seriously, fuck that guy).

A witness said Millicent "had no pity and would have cashiered him if she could."

But it wasn’t just women’s rights that concerned Millicent. In 1900, NUWSS member Emily Hobhouse traveled to South Africa and shone light on the treatment of the Boer People who were at war with England (The Boer War).

The Boer People were being sent to concentration camps (never not a good time to to remember that the British invented them!),their land overturned and scorched. This quickly became a hot topic in Parliament, with all around liberal bae David Lloyd George declaiming the British military’s actions as an extermination of a people.

Believing Hobhouses’ claims to be vastly exaggerated, The British Government created a commission of women with the purpose of travelling to South Africa and reporting back on the camps. Millicent was made head of the commission, which was met with criticism…as Millicent was in favour of the camps.

Millicent went out expecting to find the conditions in the camp slightly grim but with the people well fed, clothed, and sheltered. This was not what she was met with.

To say the conditions in the camps were grim would be a gross understatement (emphasis on the gross). Disease and famine were widespread and, by the end of the war, of those in the camps, 1 in 4 had died.

Despite a (pretty darn racist) government release defending the camps, The Fawcett Commission backed up Hobhouses claims and made their damning evidence very public knowledge. The Boer War ended in 1902, the camps quickly removed.

BUT IT WASN’T ALL GOOD NEWS. BACK IN ENGLAND, THE WOMEN’S RIGHTS MOVEMENT HIT A WALL.

The Suffragists arguably had most MPs persuaded that votes for women was the right thing to do, but as anyone who has spent 5 minutes in Parliament will tell you – just because MPs know it’s right…doesn’t mean they will do it. And so, from 1901-1914 the Liberal government refused to do anything around women’s votes.

Yeah, don't try to look for logic in that bullshit. via Giphy

In this climate, the suffragettes were born, with the WSPU (The Women’s Social and Political Union) forming in 1903. The suffragettes were a much smaller movement than the Suffragists (by a David and Goliath level comparison) but their violent methods caught the eye of the media, and they stayed in the headlines for much of the decade. 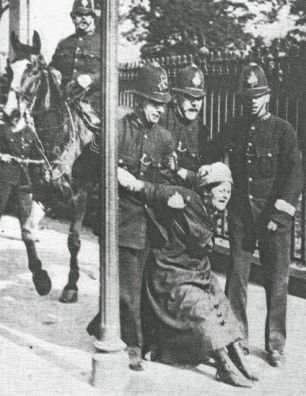 Yet Millicent maintained that the NUWSS wouldn’t enter the violent fray, intent on keeping the dialogue with politicians open; saying:

‘I can never feel that setting fire to houses and churches and litter boxes and destroying valuable pictures really helps to convince people that women ought to be enfranchised.’

Then, in 1914 England entered the First World War and the suffrage movement met a crossroads. Should they halt their actions and support the war effort, or continue nonetheless? The WSPU agreed to halt activity, with the government releasing all imprisoned suffragettes the movement threw themselves fully into recruiting soldiers.

BUT the NUWSS disagreed with the war. Millicent was torn; to publicly call for peace would lead to a public outcry against the suffragists; horrific considering the fight for the vote hadn’t actually been won – but to do like the WSPU and drive recruitment would splinter the party.

In the end Millicent opted to stay neutral, not calling for peace, but not actively speaking out for the war. It meant she lost some face within the party and the NUWSS lost some members, but crucially, it ensured the public remained on side and lines with politicians open. 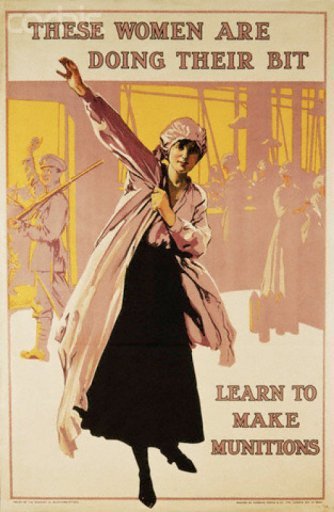 Throughout the war, women from all over the country took up the job roles men had left behind. Both the NUWSS and the WSPU were key to this work effort, which did far more than help the British military…it showed on a practical level that women were just as capable as men on every level.

And so, in 1916, Millicent wrote to the Prime Minister urging him to take into account the tremendous daily work being carried by women and reconsider the vote.

And this time he did.

A year later, now in her 70s, Millicent stepped down from her role leading the NUWSS. But, of course, her fight was not over. As she always campaigned for women’s rights, calling for equal access in the fields of civil service and law and fighting for better divorce rights for women.

IN 1928, PARLIAMENT GRANTED WOMEN THE SAME VOTING RIGHTS AS MEN.

Millicent was one of the only original suffrage campaigners to see their decades-long campaign win out. After over 60 years of campaigning, she watched the bill be carried out in Parliament.

Forgotten for decades, Millicent’s story is finally getting the attention it deserves and in 2018, she became first woman with a statue in Parliament Square. 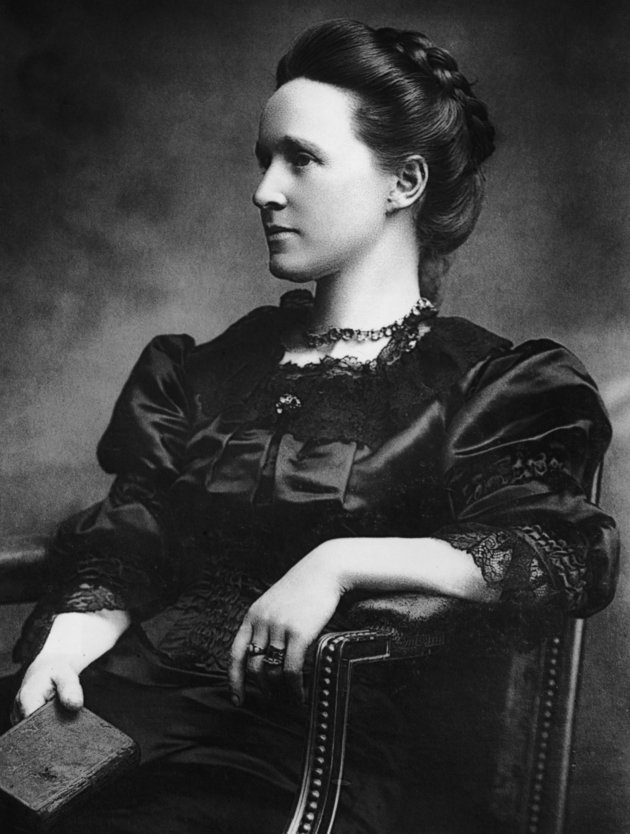 Tags: Millicent Fawcett , F Yeah History , women's right to vote , feminism , history , F Yeah History , women's suffrage , Millicent Fawcett
Support Feminist Media!
During these troubling political times, independent feminist media is more vital than ever. If our bold, uncensored reporting on women’s issues is important to you, please consider making a donation of $5, $25, $50, or whatever you can afford, to protect and sustain BUST.com.
Thanks so much—we can’t spell BUST without U.