A Men's Prison Group In California Is Learning About bell hooks 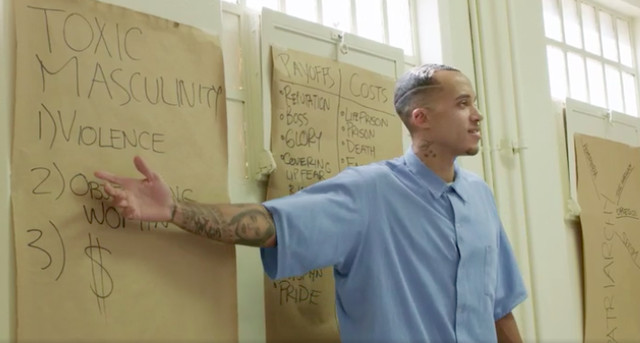 There’s a group program in the Correctional Training Facility in Soledad, California that’s not your typical men’s prison group. Success Stories is a group with the goal of understanding the patriarchy, and more specifically, how it affects the lives of the inmates. The group was founded by Richie Reseda and Charles Berry in 2013. Many of the materials were largely based on bell hooks’ The Will to Change and We Real Cool. Richie, who has since been released, had been involved in intersectional feminist activism before his incarceration, training with Patrisse Cullors, an activist noted for her work with the Black Lives Matter movement. In a recent interview with MEL Magazine, Richie notes his dissatisfaction with the run-of-the-mill programs usually being offered, saying: “I realized the programs challenged illegal activity, but not the root of these problems, which is patriarchy. In fact, all of these self-help groups reinforced it. Their answer to everything was traditional American patriarchal values: Run your house and run your woman. They acted like if we had all done that, we wouldn’t have been in jail right then, and that’s the only perspective they were offering.”

This past week, Richie launched Success Stories as an official non-profit with the help of his wife Taina, who has also been running a non-profit called Initiate Justice. While incarcerated, Richie even helped to draft a proposal that would eventually become a law. Prop 57 incentivizes attending these group sessions in exchange for reduced sentencing. According to Next City, “[the] proposal earned the attention of then-Governor Jerry Brown, and California’s Public Safety and Rehabilitation Act passed in 2016 with an amendment that tied group participation to reduced prison time.”

Last year, CNN released a documentary entitled “The Feminist on Cellblock Y” about Richie and his work. A good chunk of the documentary consists of watching an actual group meeting take place, where we hear from the inmates themselves and see how they work through difficult concepts. The inmates also show remorse for the crimes they’ve committed, and they try to come to terms with the circumstances that led them to commit those crimes:

“We harm people because we don’t see them as people: we objectify them,” said James, one of the inmates.

When that idea of objectification gets linked to the ways that toxic masculinity objectifies women, it allows us a more holistic view of why crimes are committed.

Though the words are never mentioned, something that I kept thinking about as I watched was the concept of restorative justice. At its core, “[r]estorative justice views crime as more than breaking the law – it also causes harm to people, relationships, and the community.” As reported by the Centre for Justice and Reconciliation, restorative justice takes the approach that healing can come through mediation, and it is supported by these tenets: “Inclusion of all parties, encountering the other side, making amends for the harm, reintegration of the parties into their communities.”

What would our world look like if we looked for why crime occurs, instead of just locking people up and throwing away the key? What if we gave communities the resources and space to heal? As one inmate, Benjamin, says in the film: “I didn’t just wake up one day and say ‘I wanna be violent.’”

The United States has 5% of the world’s population, yet 25% of its prison population. That's over 2 million inmates. We do not have 2 million irredeemably bad people who are incapable of change and growth, yet that's what we are saying when we lock people up for an arbitrary amount of time and not provide them with any resources or skills for life upon release.

If you’d like to read a more personalized account of the brutal effects that mass incarceration can have on an individual (and especially why the death penalty should be abolished), I highly encourage you to read Bryan Stevenson’s Just Mercy.

Criminalization Of Poverty: How Some Women Are Targeted For Being Poor