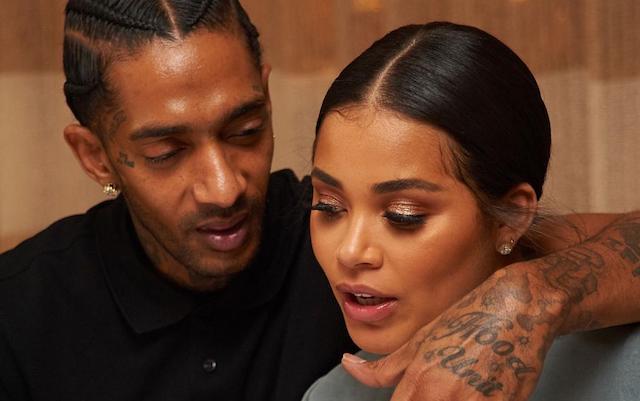 The Hip Hop community has been in mourning since March 31, when the news broke that rapper, Nipsey Hussle had been shot and killed outside of his store in LA. During this past week, the untimely loss has proven to be much deeper than the death of a rapper, but the passing of a father, longtime partner to actress Lauren London, and pillar in a long-abandoned community in LA as he invested in rebuilding the area and attempted to resolve issues with Bloods, Crips, and the most notorious gang of all, the LAPD. There had been an outpour of condolences from celebrities, fans, and non-fans alike.

So imagine everyone’s surprise when rapper Kodak Black decided it would be a good time to publicly share his attraction for Nipsey Hussle’s longtime girlfriend and mother to his second child, Lauren London. Not even a full week after Nipsey’s death, Kodak Black hopped on Instagram Live, and said “Lauren London fin to be single! She fin to be a whole widow. I’ll be the best man I could be for her. I’ll give her a whole year to be crying and shit...” Oddly enough, Kodak seemed to be around someone with a little bit of decency as his friend sternly interjected: “Too soon, bro.” Kodak quickly tried to clean it up with “I ain’t tryna shoot at her! I’m saying she could be 2-3 years-- like if she needs a friend to holla at or a shoulder to lean on, you can call my line.”

And of course, an onslaught of other rappers, like T.I., The Game, Gillie Da Kid, and even R&B singer, Tank, emerged to defend Nipsey, not Lauren.

But here’s the thing: Kodak Black has been trash. He started his career off making disparaging comments about Keke Palmer complexion, has an open sexual assault charge against him, and not to mention, just last month he was on Instagram sexually harassing Young M.A. She simply declared him weird for sexualizing her as she is a very masculine presenting lesbian. In a back and forth through Instagram, Kodak asked, “How are you a girl but don’t want your pussy penetrated?”

Not once during these times, did any other rapper speak out. No one checked him or tried to mentor him. When radio host Ebro, from the legendary Hot 97 questioned Kodak Black about the rape allegations, Kodak, of course, cut the interview short. Many listeners collectively came to Kodak’s defense too. They felt Ebro was being negative for even bringing the cases up. Fellow South-Florida rapper, Trick Daddy, ultimately stepped in declaring he “wanted all the smoke with Ebro.” Then Kodak then did an interview with the rival radio show, “The Breakfast Club” on Power 105 where he was coddled and talked about love.

So what was the straw the broke the misogynistic camel’s back? It wasn’t that Kodak Black had found a way to sexualize a grieving woman; it was that woman’s proximity to a man they all loved and respected. Nevermind that Lauren London is a person suffering a great loss as a partner and a mother, and doesn’t need any unwanted sexual advances right now--Kodak disrespected Nipsey Hussle, as Lauren London is his girl, and that is something everyone just couldn’t stand for.

Kodak Black followed up as expected, with a half-ass apology, “If I disrespected you, Lauren London, in any shape or form, I'm sorry...Even though I didn’t. And rest in peace to dude [Nipsey Hussle].  Y'all already know what I said. I said 'Dude encouraged me to do shit for the community.’ But anyhow, my bad to them two. But for all you other people trying to act like y'all 'little boy'-ing me or checking me on the internet, that's how y'all feel.”

But to no avail, because men can recognize toxic masculinity, accountability, and boundaries when it’s in relation to themselves. Los Angeles rap radio stations immediately issued a ban on Kodak Black’s music.

I won’t disrespect my timeline posting a pic of Kodak Black. However, I will say this, I’m not here for the blatant disrespect and fake ass apologies. To disrespect the King Nipsey and The Queen Lauren, is where I draw the line. Hip Hop has been very disrespectful lately. Not only is this disrespectful to Hip Hop, but this is disrespectful to a beautiful human being, spirit and a legacy. Sometimes I feel a certain way, but I don’t publicly speak out. I just don’t fuck with the person, place or thing. This one, I can’t just keep it on a personal chill. I’ve been a child of Hip Hop for a looooooong time. Hip Hop raised me and I’ve raised Hip Hop. I’m not new to this or fake with this. I’m a soldier!!!! I’m not just Phone Taps and funny interviews. Check my pedigree. I will not stand by and let Kodak Black come between an allegiance I have with dear FRIENDS. Nipsey’s honor can’t be disrespected like this. We must put a shield around @LaurenLondon and his ENTIRE Family. We can’t allow these things to happen. Nipsey wouldn’t. We look the other way and forgive too easily. I’m a black man first and I love all that deserve my love. I’m with unity, however, we must discipline our own as well. This isn’t about radio or dropping records, that’s been done. This is about protecting a LEGACY and holding people accountable. This may not change Kodak Black now, but I pray it changes his or someone’s future. For all those out there that wanna disrespect and play with royalty, I advise you to think “THRICE”. Long live the spirit, knowledge and wisdom of Nipsey Hussle. This has to be the standard FOREVER!!! The Marathon continues ???? (I’m blocking the bullshit from now on. Try me)

I’d be lying if I said that Hip-Hop’s haste to take action doesn’t sting. Like, I knew we had a ways to go, but damn. Where was this energy when black feminists and dream hampton were trying to #MuteRKelly?

So Big Boy, T.I., The Game, and everybody else do not get points for defending Nipsey’s honor when Lauren London’s was the one that was violated. All of this has everything to do with Lauren London and nothing to do with Nipsey. Sure Kodak’s comments would have likely never happened if Nipsey was still alive, but Lauren is not owed respect because she was Nipsey’s woman. That’s still objectifying by nature. Lauren London exists as a whole person, she isn't Nipsey Hussle’s property.

This is why we have conversations about feminism, toxic masculinity, sexual harassment, and cat-calling. Most women lie and say that they are married or have a boyfriend when dealing with unwanted attention. Because we know that our “no’s” aren’t enough and what we want don’t matter; only the idea of another man’s presence can maybe thwart any of that. This is how we survive and it shouldn’t be.

Everyone, Particularly Offset, Needs To Leave Cardi B Alone