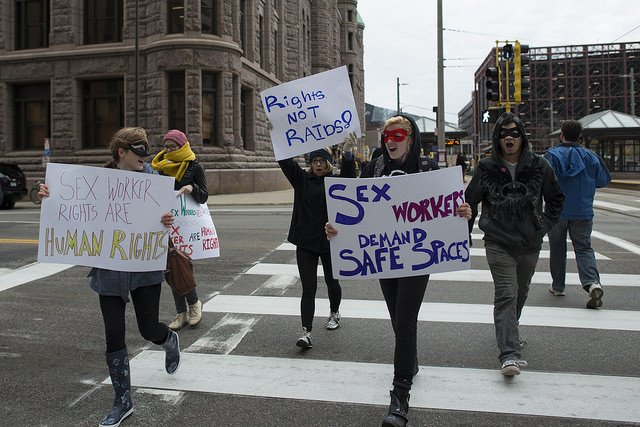 Democratic politicians in New York have proposed legislation to decriminalize sex work in the state. State senators Julia Salazar and Jessica Ramos and Assemblyman Richard Gottfried will draft the legislation. Salazar, who was elected this past November, was one of the first politicians to include sex workers' rights as part of her platform.

In a press conference on February 25, Salazar said: “The climate of fear of intimidation caused by criminalizing sex work makes it very difficult for sex workers to seek any kind of redress for labor issues or to report the various kinds of abuse many endure in silence...sex work is work, and we need to start treating it as such.”

The legislation comes with the support of a coalition called Decrim NY, which is a collection of more than 20 organizations. According to Salon, they have three goals: “to decriminalize sex trade-related offenses in New York and pass legislation that protects people in the sex trade; to end the incarceration of sex workers and vacate criminal records related to prostitution; and to ‘destigmatize the sex trades.’”

Though decriminalization of sex work is seen as a radical position to take, it shouldn’t be. Historically, politicians of all kinds have been hesitant to support more progressive attitudes towards sex work. But as sex work is a form of labor, and we generally agree that people who perform labor should be protected and paid, sex work should fall under that purview as well. Just as we’d spring to action if a factory worker was injured on the job, we should care about keeping sex workers safe, to the extent that it's possible in a patriarchal society.

Legalization is when there are no laws that prohibit the buying or purchasing of sex, and it is a regulated industry under the government’s control. Many countries have legalized sex work, like Germany and the Netherlands.

Supporters of decriminalization say that it helps to bring the profession out of the shadows, making it easier to access health care and organize for safety and better working conditions. New Zealand fully decriminalized sex work in 2003 and required that the results of this policy be researched in its aftermath. TIME reported that “a government review in 2008 found the overall number of sex workers had not gone up since prostitution became legal, nor had instances of illegal sex-trafficking.”

To understand the recent debate about the legal status of sex work in the United States, let’s first look at a recent bill package that passed last year. In 2018, Congress passed package of bills called FOSTA-SESTA. These bills were designed to combat sex trafficking, though sex workers and advocates say that they have detrimentally impacted their safety and well-being. These bills held third party websites, like Backpage or Craigslist, liable for advertising prostitution under the guise of preventing sex trafficking. Many sex workers used these websites to screen clients and build an online community to keep each other safe.

Since the bills have shut down some of the sites sex workers have been using, their safety has now been put at risk. Some have been forced to return to walking the streets, or taking jobs they don’t want in order to make ends meet. One sex worker, Melissa from Phoenix, recently revealed to HuffPost: "It’s forcing me to go back the streets, walking up and down trying to find clients. Now I not only have to deal with the police, but now I’m forced to deal with tricks that know this bill is in effect, and trust me, they are taking full advantage of it by being more aggressive. And unlike being in the safety of my room, I’m in their car. I don’t have the option to leave or kick them out. I’m literally stuck in their car until they are finished with whatever it is they want from me."

Many Democratic candidates for president voted for FOSTA-SESTA. Bernie Sanders, Cory Booker, Kirsten Gillibrand, Kamala Harris, and Elizabeth Warren all voted for SESTA in the Senate. Tulsi Gabbard and John Delaney voted for FOSTA, its House counterpart. Of course, it shouldn’t have to be said that human trafficking is a global issue that demands our attention; we should be trying to pass laws to curb it. However, when we conflate trafficking with legitimate sex work, we do a disservice to genuinely trying to fix the issue. We can also look to see how trafficking is facilitated by the exploitative nature of the capitalist system, but that’s a diatribe for another time.

The idea of legislating (or not legislating) sex work is one that has been dividing feminists for years. Healthy debate is necessary. But when we don’t want to debate the issue at all, and instead have the knee-jerk reaction that all sex work is coerced an immoral, that serves no one and actively harms sex workers. Examine the facts. Listen to people’s experiences. Do your research, and draw your own conclusions.

6 Things You Need To Know About Human Trafficking