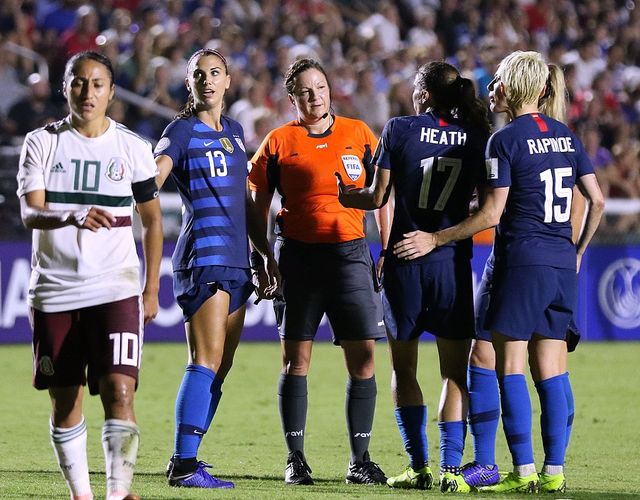 On the same day that David Beckham stood in front of a newly unveiled statue of himself in L.A. and called it a dream come true, the United States Women’s National Soccer Team celebrated Women’s History Month by wearing inspirational women’s names on the back of their jerseys during their game against England. While Beckham stated that he hoped his kids would be able to see what he “created” and that it would likely make them proud, the members of the U.S. women’s team chose to honor inspirational women like Sojourner Truth and Malala Yousafzai.

The jersey idea certainly got a lot of attention for the team currently in training to defend their World Cup title this June. The players’ choices gave interesting insight about their personalities and views. Goalkeeper Ashlyn Harris chose Cardi B because she "owns her story, all of her story," including her past as a stripper. Samantha Mewis picked Mia Hamm because she grew up watching her games on “VHS tape.” It was delightful to see Beyoncé, Maya Angelou, Robin Roberts, and Ruth Bader Ginsburg all on the same team.

However, some people online were against the idea, and were unable to grasp how groundbreaking it can be for women to pay homage to other women in sports.  Like midfielder Tobin Heath told the United States Soccer Federation, "My role models growing up had always been male footballers or just men– most of the greatest have always been men. So, that’s why this whole thing is so cool, because we’re trying to change that and show that some of the greatest are women as well." Crystal Dunn chose Serena Williams, who once said that because there weren’t any role models that looked like her in tennis that she had to “be that role and be that person” herself.

We’re used to Beckhams of the world being deified, but women wearing women’s names on the back of their jerseys? That’s a new concept. Rebecca Solnit pointed out in her New Yorker essay, “City of Women,” that “dead men with live identities haunt... almost every city in the Western world. Their names are on the streets, buildings, parks, squares, colleges, businesses, and banks, and their figures are on the monuments.”  She reimagined what New York would be like if everything were to be named after women, where the subway map would have metro stops like “Shirley Chisholm” and “the Guerilla Girls.” She wonderedhow her life would change "if lady Bonds and Spiderwomen became the ordinary fare of my entertainment and imagination."

Who inspires us and why is an ever-changing combination of internal and external factors. Boxer Heather Hardy told ESPN that she grew up wanting to be the first female pitcher for the New York Yankees around the same time I was envisioning myself going to the World Series with John Kruk and the Phillies. I loved women’s soccer, but I only saw coverage about the U.S. team every four years for the World Cup, and it was not yet considered cool to have sheros. Part of stanning someone is envisioning being them, and it’s hard to do that if it’s not widely represented or culturally acceptable to do so. It’s lovely that men and women can now look up to and want to emulate Tobin Heath, Doris Burke, Jessica Mendoza, and Elena Delle Donne.

Alex Morgan and Kelley O’Hara chose to wear their own friends’ and former teammates’ names on their jerseys. In a world where women are expected to want to wear their boyfriend's or some other man’s jerseys, what would our world look like if we all wore our very own female friend's or partner’s names on our jerseys instead? Or our own name? The Wales national soccer team didn’t get their own last names on their jerseys until January 2019, something that midfielder Jessica Fishlock said they had fought for for over twelve years.

As Megan Rapinoe’s pick, feminist and civil rights activist and writer Audre Lorde, once wrote, "[c]aring for myself is not self-indulgence, it is self-preservation, and that is an act of political warfare." When our streets and buildings still mostly bear the names of men and the L.A. Galaxy plans on making more statues of men like Beckham in what they are calling “Legends Plaza,” finding ways to celebrate women can very much be an act of defiance.

The US women’s national team may have lost their game against England, but they won against Brazil a few days later. At halftime, midfielder McCall Zerboni (who picked Mother Teresa to wear on her jersey) made headlines for yelling the following in the middle of a huddle: “We have forty-five more minutes to do the right thing together. Do not let down. Do not show weakness. We’re fucking winners!”

Afterwards, a male commentator apologized to the TV audience for the camera picking up the “salty language,” while former US soccer player Aly Wagner shrugged it off in the announcing booth by saying, “That’s real. That’s raw. It’s what we do.”

On International Women’s Day, the USWNT players proved that they are fully committed to doing “the right thing together” by filing a gender discrimination lawsuit against their employer, the U.S. Soccer Federation, in federal court. They are seeking back pay for “institutionalized gender discrimination” not only themselves, but also for former players that had to deal with less pay and inferior medical treatment and traveling conditions. The players have been fighting for this for years and aren’t backing down, paving the way for female athletes in the WNBA and US Hockey to do the same.  These women realize that they are setting new standards for a hopefully not-so-distant future where wearing women’s names on the backs of jerseys will be the norm.

Why Do Men Feel So Threatened by Female Athletes?

This Man Was The Donald Trump Of Women's Soccer