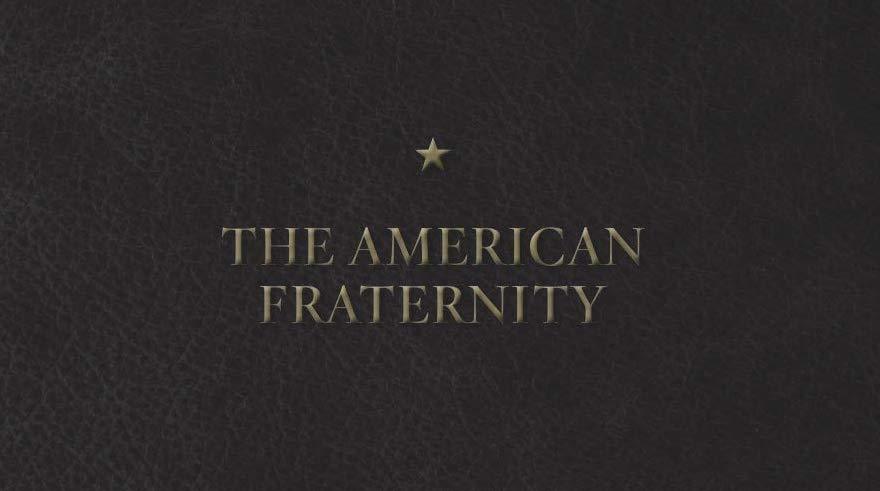 Andrew Moisey didn’t set out to say something about the #MeToo movement. In fact, the movement didn’t exist in the early 2000s, when he photographed frat parties for his art book The American Fraternity, released in November. When we speak, Moisey is very clear that his intent was to create an art book that captured a certain culture. “It feels cruel for the book to come out now because it’s the worst possible moment for the people who are in it—it’s an art book, not an attack on any fraternity or people,” he says. “Everyone wants to see Brett Kavanaugh in college, and all they have is my book.”

The American Fraternity pairs Moisey's photographs of early 2000s frat parties at UC Berkeley with pages from a 60-year-old fraternity ritual manual, as well as two essays by academics—Cynthia Robinson and Nicholas Syrett—about frat culture. Publisher Daylight Books describes the result as "shed[ding] new light on the peculiarities of the fraternal orders which count seventy-five percent of modern U.S. presidents, senators, justices, and executives among their members." One page of The American Fraternity features a list of all the Supreme Court Justices who have been members of fraternities, including Kavanaugh, who had not yet been confirmed when the book was published. Much of the media coverage of the book makes reference to Kavanaugh: "Moisey’s first photo book collects his images of men undergoing initiation rituals, hanging out behind the closed doors of their fraternity house, and enjoying the kind of drunken debauchery recently spotlighted in the hearings for Supreme Court nominee Brett Kavanaugh," writes Mother Jones. "Moisey had finished the photobook some time before Donald Trump nominated Brett Kavanaugh to the Supreme Court. But in light of that saga, it takes on a more charged kind of resonance," writes VICE.

While some people see the book as Moisey intends, as a contextless representation of frat culture in general, I see it as documenting a place I spent a significant amount of time during my years at UC Berkeley, which spanned the years Moisey took his photographs. I attended UC Berkley frat parties during the time that Moisey was photographing them. Moisey may not have set out to say anything about consent with his book, but, as far as women pictured in the book are concerned, he says a lot about what their consent means to him. I spoke to four women about Moisey’s book; one, whose image I recognized in several online articles about the book, didn't sign release forms or consent for Moisey to publish her image. When she contacted Moisey to protest, he sent her release froms signed by her friends. They don’t remember signing them, and visited the fraternity exclusively to socialize while drinking. Street photographers legally don't need permission to photograph subjects in public spaces, but given that these parties were pre-social media and they viewed the fraternity as a private residence, the women feel they should have been fully informed of how Moisey intended to use their images.

“This whole thing is so upsetting,” states one woman. Her picture is discussed in depth in one of the two essays included in The American Fraternity: "Girlplay," by Cynthia Robinson, Professor of History of Art and Visual Studies at Cornell University. The woman in the photograph says she didn’t sign a release form; Moisey says her face isn’t pictured, so he didn’t need one. But despite this, I recognized her immediately. Did her mother? Her employer?

When I ask Moisey about consent forms, he tells me, “It was impossible to get release forms from people at parties, so I photographed in ways to keep their identities private.” However, of the 18 photographs that show women, their faces are identifiable in 13. When I ask Moisey to comment on these photos, he simply reiterates the quote above.

Moisey stresses that he never saw a sexual assault at the particular fraternity whose parties he photographed. Neither did I. Yet in her essay, Robinson describes a different woman in the book, passed out on a bed, as possibly having already been assaulted; if she hasn't been raped yet, Robinson writes, she is almost certainly about to be. “All roads lead to Rome,” she writes.

In this way, The American Fraternity emphasizes the risk of sexual assault at frat parties and, at the same time, depicts frat culture as relying on women's participation. Paraphrasing Robinson’s essay, Moisey states, “People should wonder, why are girls involved in this culture? The culture wouldn’t exist without their participation.”

Maybe what they want is that participation—to explore the newly-found freedom of fledgling adulthood. Robinson describes the women photographed sitting on men’s laps as passive—in fact, all her descriptions of these women assume their passivity. But some women are aggressively sexual, some love to dance at parties, and some just like beer. Women are complex people with different motivations who do not leave the house solely to be, as Robinson calls them, “Frat-House Aphrodites.” Yes, the culture that allows for sexual assault at fraternity parties wouldn’t exist if women didn’t attend these parties. It also wouldn’t exist if men didn’t sexually assault women. Only one of these options allows women the freedom to socialize as we choose. Robinson describes one woman in the photographs as being infantilized by her own actions, yet when I speak to her, the woman says she feels infantilized only by Robinson’s essay. Of her time at the party, she says, “I just wanted to get drunk.”

Sexual assault is, unquestionably, a problem at fraternity parties, and that should be addressed. But by casually sitting on a boyfriend’s lap, or taking off a shirt on the dancefloor, do women contribute to a culture that harms their friends, themselves, their then-not-yet-born daughters? Are Moisey’s photos of young women, at least some of which are printed without the consent of their subjects, and Robinson’s accompanying assessment of their behavior, somehow a different type of indictment than, well, look what she was wearing, what did she expect?

The issue, then, becomes what participation in frat party culture entails—can it be for women what it is for men? “There are a lot of women in the book,” Moisey points out, “but [they] are mostly just standing around.”

Despite Moisey's intentions, the images of the women in the American Fraternity are where the tension between desire and social expectations is revealed—women want to shotgun beers, fuck strangers, and get messy, the way the boys can. Yet we hesitate to do so, knowing eyes, and perhaps even cameras, are always, acutely, on us.

Alexis Schrader is a recovering litigator and freelance writer focused on feminism, parenting, and media. She blogs about all three at consciousscreentime.com.