The Best Moments from An Otherwise Terrible State of the Union 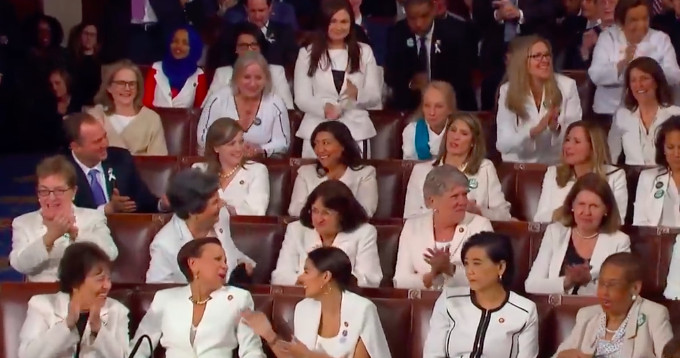 Whether you had the wherewithal to endure the racist-in-chief’s blathering for 90 minutes, or you spent that time catching up with new shows on Netflix (I hear Russian Doll is very good), it was impossible to escape the fact that the president’s annual State of the Union speech was last night. The bad news - our state of the union is terrible, and we didn’t need a speech to prove that! The good news - we now have even more badass women in Washington working hard to oppose the president’s awful agenda. The 2018 midterm elections brought a record number of women to Congress, with 127 serving this term. And the ladies did NOT disappoint. Here are some of the best moments from the State of the Union:

First, the sheer coordination of LOOKS

In a nod to the suffragettes, the Democratic women of the 116th Congress wore white (and beige and cream and off-white as well). This isn’t the first time in recent history that Democratic women have embraced the color. Hillary Clinton often wore white on the campaign trail in 2016, and there were those who called out embracing the original suffragettes without engaging with their legacy of racism. Ayanna Pressley, the newly elected congresswoman from Massachussetts, found a way to do both:

The women of the #116th were asked to wear white tonight in tribute to the #suffragettes Tonight, I honor women like #AlicePaul who led the movement & women like #IdaB who were excluded from it. Kente cloth & the color white. Holding space for both #womanists & #feminists, always. pic.twitter.com/kaPQGb65Et

The clap that launched a thousand memes, including a personal favorite:

Both are classy California women you do NOT want to cross.

NO SMILING. NO CLAPPING. NO OVATION. AN AMERICAN HERO. pic.twitter.com/dHw2IHQWkd

Joe Manchin, take a seat. Cortez is all of us.

The women celebrating in spite of (not because of) Trump

When he touted more women in the workforce and the 100th anniversary of women’s suffrage, many women rose to their feet to celebrate, leaving Trump confused. “You weren’t supposed to do that!” he joked. Nevertheless, they persisted.

All those ERA Yes buttons!

In case you need a history refresher, the Equal Rights Amendment (ERA) was a proposed constitutional amendment that gained traction in the 1970s that was supposed to enshrine gender equality under the law. It had until 1982 to pass, but not enough states ratified it in time. But a new effort to bring it back has been underway for the past couple years. Last night, many women wore pins declaring “ERA Yes.” Phyllis Schlafly is turning over in her grave.

On a more serious note, Alexandria Ocasio-Cortez, Rashia Tlaib, and Ilhan Omar wearing pins of Jakelin Caal Maquin, the seven-year-old Guatemalan girl who died while in custody of Customs and Border Patrol.

Reps. @AOC and @RashidaTlaib are both wearing pins bearing the image of Jakelin Ameí Rosmery Caal Maquin, one of the two children who died in immigration custody in December.

Tlaib's Instagram caption: "We are bringing Jakelin into the room with us during the #SOTU." pic.twitter.com/3jQ032lj4P

The incredibly cruel policy of family separation is far from over. Thousands of children still remain separated from their parents. In fact, according to the Associated Press, the Trump administration has speculated that there are literally thousands more unaccounted children than they initially thought, more than the 2,737 listed in court documents. Even more horrible, the administration has no plans to fix their error. According to the Associated Press: "In a recent court filing, Jonathan White, who leads the Health and Human Services Department’s efforts to reunite migrant children with their parents, said removing children from 'sponsor' homes to rejoin their parents 'would present grave child welfare concerns.'" White claims the process would be “destabilizing” and “traumatic."

Delivering the rebuttal to the State of the Union is a notoriously difficult gig (remember Marco Rubio and his infamous bottle of water?) Abrams kept her cool and delivered a powerful speech.

Stacey Abrams Offered Us The Hope We Needed Last Night