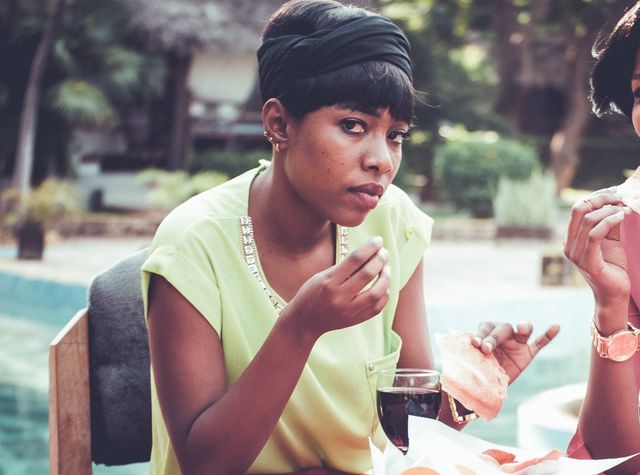 I couldn’t see what dieting cost me until I stopped for good. No, I was never on a life-threatening diet. But I was on so many, for so long, that my life got hollowed as if by termites, and my grasp on sovereignty became weak as a butterfly. I’ve dieted through every season of my life—which is to say, I’ve been consumed with fear that my natural body offends societal norms, values, and morals—until now.

For example: In first grade, I pull the teacher aside and tell her I’m fat. I say it with shame because my mom and siblings have told me I’m fat, and I know they are ashamed of me. My teacher asks how much I weigh. I say, “Seventy pounds.” She nods sympathetically. Weeks later, I run to her crying to say the boys cornered me on the playground, poked my tummy with their little-boy fingers, and chanted, “Human beach ball! Human beach ball!” She nods, sympathetically, again.

High school: My best friend and I slouch over a book at the public library reading side-effects of methamphetamine, our backpacks slung low, her purple hair falling on the page. We’re contemplating buying speed from a grungy junior and “going camping” at her family’s cabin in Humboldt. We’d return home slender, at last.

Summer: But in the end, the cabbage soup diet feels safer than meth. Of those soupy weeks, I most remember the earthy smell of canned tomatoes and sour cabbage steam, my jean skirt loosening until it fell off when I sucked in, and the mouthfeel of our first post-diet meal, chewy brown rice, poached chicken, and steamed broccoli.

College: I’m in my dorm in Manhattan, my feet pounding on the basement treadmill for two hours, and then I get dinner: one puffy white spoonful of aerosol whipped cream. I tally the day’s calories in my journal and write fat pig! I finally fit a size ___ at French Connection. I’m not a freak anymore, I write. My new bestie is a chic, fuzzy-armed girl with loads of money and a cupcake obsession who happens to be bulimic. And my new mentor, who I worship for her Tribeca loft and marble bathroom cluttered with French skin care, tells me sincerely that if throwing up food helps, then it seems like a good coping skill.

Post-College: I visit the ER after stepping on a long, thick rusty nail. The nurse weighs me: ___ pounds. At home, I call my best friend and sob. Starting that night I become vegan and wait for the fat to leave, but I start dating a meat-and-potatoes guy and veganism fizzles. So I join Weight Watchers. I’m surprised, and oddly comforted, to learn that they still have the same rectangular gummy suckers—just 1 point for a whole pack—they had when I was 10.

Post-Baby: With increasing anxiety and decreasing success, I rapidly cycle through Atkins, South Beach (and oldie but goodie?), a few days of Whole30, I Quit Sugar, 5:2, and Weight Watchers. It's my second or third time on them all. I buy a FitBit and walk so ferociously that I sprain a tendon in my foot. I keep walking and start taking Advil and Tylenol all day; on a business trip, my foot screaming, I walk 75 blocks instead of taking a cab because I want those points. I cannot gain weight, so I have to get those points. A few weeks later, I’m in a foot cast boot and can’t exercise for three months. So, ha. The joke’s on me.

Then it stopped. Almost at once, I dropped out of dieting as if out of a cloud. (The fall was just as terrifying, exhilarating, liberating.) Walking to work, I tried to Google “best way to lose weight” and my thumbs froze an inch above my phone. I couldn’t type the words. I literally thought, What’s going on? I went looking for that willpower, that optimism, that shame that has always been inside me, ready to rally for a new diet; but instead I found a screaming hole. And it said, I can’t do this anymore. I didn’t know what was on the other side of not-dieting, but I knew it was my only choice. As Isabel Foxen Duke says, my sanity became more important than being thin.

Slowly, with false starts and backward slides, I gave up the false belief that I could control the size or weight of my body, and the false belief that I could control what I eat with weight loss as the goal, and the false belief that thin is synonymous with healthy, pretty, and happy. People and places like Virgie Tovar, Be Nourished, and Jessamyn Stanley taught me a new vocabulary: weight neutrality, body trust, unrestricted eating, health at every size. And I also started unlearning the language in which I’m so painfully fluent: points, BMI, “food addiction,” calories in calories out, willpower, “this time...” I saw how entangled my fatphobia was with anti-blackness. I learned to be ruthless in my appraisal of any eating plan: would I still do this if it was going to make me gain 5 lbs? Then it’s a diet. I gained weight, and more weight, and am learning how to be. I’m processing what I can only call exercise trauma—the flinching, wincing grimace I sometimes feel in my chest and limbs when I think about exercise after a lifetime of exercise as punishment. I’m learning how to be in this wilderness while holding hands with my family and friends who still diet on the mainland. I’m learning to keep my balance when trolls insult my body in the comments section, or when friends lament on how fat they are, or when photographers try coaching me into a slimming pose.

And I’m grieving, because I’m learning how much I died—my life seeping out between tiny meals and weigh-ins—during my diet decades. Because even when diets don’t actually threaten to kill you, diets will end you in other ways. They will chop off your fingers and toes so it’s harder to hold the good and harder to walk away from the bad. They’ll wind your joints in barbed wire until your range of motion is coffin-like. They’ll turn you against your body’s ancestral blueprint. They’ll pit you against your sisters, friends, mothers, strangers. They’ll pickpocket you. They’ll exhaust you. They’ll nick your vocal chords. They’ll worm into your soul and fuel infighting. They’ll wrap fingers around your throat and squeeze, forever.

I look back and want to howl for what I was afraid of or refused to try: kayaking (what if the boat sinks?), swimming (what if someone sees me?), diving (what if the splash is too big?), ice cream (makes you fat), bread (makes you fat), being on top (what if he sees my stomach?), sitting down (what if the chair breaks?), tank tops (what if my arms gross people out?), high heels (what if I’m so big I scare people?), hugging (they might feel my body and be disgusted), rock climbing (what if the rope breaks?), being in photographs (I’ll have to see myself), and on and on. Every day for decades I watched life leave me in a soundless, sad stream; not because I was fat—fat people can live as deeply, fully, and exuberantly as anyone else—but because I was drowning in fatphobia, treating my body and instincts like nasty little horses that needed to be broken.

So what now? I’ll never diet again. I don’t have much of a compass; the North Star is often socked in thick clouds, and I sometimes have to crawl to be sure I’m on the path, not about to drop off, my ear cocked to the wind for liberation calls from other women who’ve stopped dieting. I still feel pangs of guilt, sometimes, when buttering toast (guilt about the toast, of course—"carbs are bad, fat is good”). I take my medicine: I fill my Insta feed with fat people, I describe myself as fat, I stand naked in front of my partner, I swim. Recently, I saw a photo where I have double chin and, somehow, I’m okay. Two years ago, that image would have thrust me weeping into the arms of Atkins, or Whole30, or Jenny Craig, or whatever. I can confidently say that though my daughter will learn a lot about how to diet from the world, she won’t learn it from me, and thus ends the twisted education I trace to my mom, and she traces to her mom, and she traces to her mom. Another word for it is: freedom.

But I’ll never get back the time or life I’ve lost. It’s gone. Not gone like a sweater I left in a movie theater. Gone like when someone dies, or before they’re born. I grieve for my lost time and my lost life, and wonder what might've been different had freedom been mine all along.

Savala Trepczynski is a writer, mother, and attorney who's been featured in/on NPR, Forbes, A Practical Wedding and more.  Follow her on Instagram @notquitebeyonce and at savalat.com.