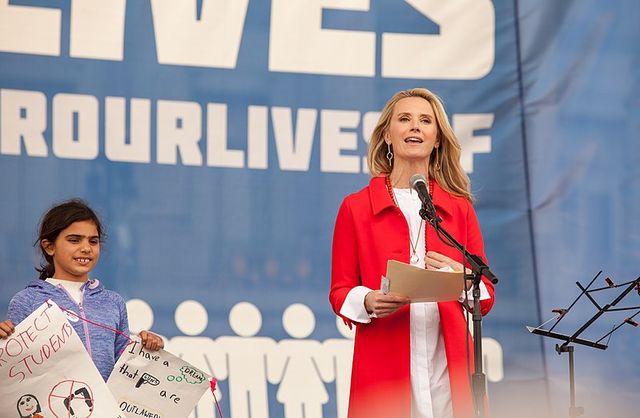 Jennifer Siebel Newsom is an award-winning filmmaker, an activist for gender equality and LGBTQ+ rights, the mother of four young children, the creator of the non-profit organization The Representation Project, and the wife of new California Governor, Gavin Newsom. Siebel Newsom is referred to as California’s First Partner on the California Government’s website and on her Twitter account. Siebel Newsom wrote in a tweet  that she prefers "First Partner" to "First Lady" because “being First Partner is about inclusion, breaking down stereotypes, and valuing the partnerships that allow any of us to succeed. Grateful for this opportunity to continue advocating for a more equitable future—now let’s get to work!”

In October 2018, Siebel Newsom told Politico that she planned to use "First Partner" if her husband was elected Governor of California “because we’re going to have a female governor someday soon…it opens up the opportunity for any couple to really step in, and that’s exciting to me.” In addition to changing the traditional role of the "First Lady," Siebel Newsom is also addressing social and economic immobility in the state. She’s bringing awareness to the major wealth gap between women due to racial disparities, and she is hoping to alleviate California’s “affordability crisis, housing crisis, homeless crisis.”

Siebel Newsom entered the entertainment industry at 28, which was “old by Hollywood standards.” She told Politico that she faced discrimination in Hollywood, ranging from being consistently typecast as a trophy wife to being told by a male agent to “take my Stanford MBA off of my résumé because I didn’t want to seem too smart.”

In 2017, Siebel Newsom spoke out against Harvey Weinstein, writing in a Huffington Post piece, “based on my years in the industry and unfortunately, my own personal experience with Harvey Weinstein, I can tell you that I believe every single word that was written in the extremely disturbing, but not all that shocking, New York Times piece published yesterday. Not all that shocking because very similar things happened to me.”

Frustrated by the discrimination and abuse she endured in the entertainment industry, Siebel Newsom took matters into her own hands. Over the past decade, she has written, directed, and produced three films. Miss Representation (2011) highlights sexism and underrepresentation of women in media, The Mask You Live In (2015) emphasizes harmful toxic masculinity, and her most recent film, The Great American Lie, about social and economic inequality, is set to premiere later this month.

In addition to her films, Siebel Newsom’s non-profit, The Representation Project, uses film and social media to combat gender stereotypes and social injustices. She told the Los Angeles Times, “I feel like I’ve been given so much privilege…I feel like it’s my responsibility to stand up for the underdog.” She went on to say that she does not consider herself to be her husband’s political equal, “but I see that we complement and support each other, and I’m obviously a thought partner of his…the main thought partner.”

Tags: Jennifer Siebel Newsom , First Partner , California , change
Support Feminist Media!
During these troubling political times, independent feminist media is more vital than ever. If our bold, uncensored reporting on women’s issues is important to you, please consider making a donation of $5, $25, $50, or whatever you can afford, to protect and sustain BUST.com.
Thanks so much—we can’t spell BUST without U.