Why Do I Have To Choose Between Hispanic And White, When I'm Both? 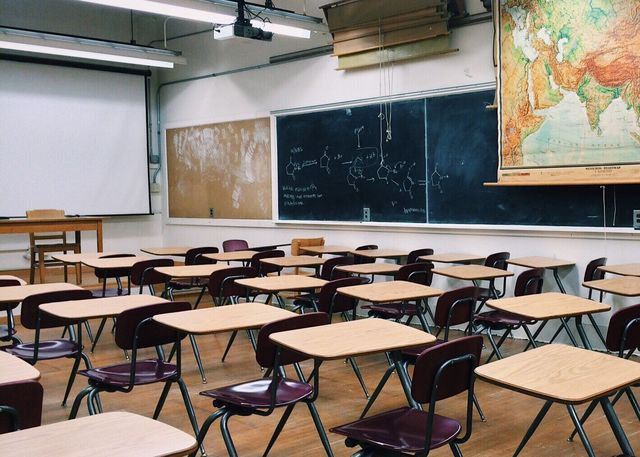 “I always have trouble pronouncing you people’s names.”

Homeroom, first day of school, senior year. He said “Die-azz” when it’s actually “Dee-ess.” I corrected him, and that was his response. I don’t even think he said he was sorry.

I always knew I was different. It was obvious, in my elementary school class pictures. I always stood out because I was too dark to really be white, but not dark enough to be black. But for years, I didn't think much about it. Looking back, I sometimes wonder if certain situations were racism that my mother tried to shield me from; if I was just too naïve to realize what was happening.

“You people.” I guess it was better than calling me the n-word, like that one boy did after school, probably in the second or third grade. “You people.”  The teacher probably meant Mexican. I am half-Puerto Rican, half-German. And I don’t completely feel one or the other.

Nowadays, in Fort Wayne, Indiana, we have a growing population from Central and South American countries to add some diversity to the catch-all term of "Hispanic," a term my father disliked; back in the day, the population was mainly Mexicans, Puerto Ricans, and Cubans. In 2002, VICE magazine ran a great article called “Latino is the New Black.” Despite the controversial title, it seemed to me like someone actually "got it." What I applauded so much about this article is the following line: “The entire Latino community is given one face, one voice, and one identity. This is bullshit. The only thing all Spanish-speaking people have in common is that they all speak Spanish. They are just as racist, classist, and judgmental of each other as everyone else is.”

The VICE article also noted how those in the Hispanic community view each other: Puerto Ricans on the island look at their Nuyorican counterparts and sneer because they are “not Puerto Rican enough”; Costa Ricans say “Nicaraguans and Panamanians are scum"; and the majority of Latin America sees Dominicans as the “n-word of the Latin world.”

"I am half-Puerto Rican, half-German. And I don’t completely feel one or the other."

Using the term Hispanic to describe all people of Spanish descent seems odd to me. Is it because—and this comes from the VICE article—that the Spaniards encouraged race-mixing, because they wanted to "whiten up" the populations of Central and South America, whereas other Europeans blanched at the thought of blending with the natives? Maybe that’s why people with Spanish surnames are all lumped together, despite being different races and coming from a variety of backgrounds. Hundreds of years after the decline of Spain’s dominance, the Spaniards left their legacy in the new world. But, as it is the way all over the world, if you’re all white, you’re all right—and better off than those with darker skin.

Once, I attended a graduation party for a former friend from a huge Mexican family. While I went to the bathroom, her grandmother asked another friend what ethnicity I was. When my friend said I was Puerto Rican, things got icy. I was one of them.

I’ve had different reactions to my ethnicity. I worked in retail for over ten years, and sometimes I’d get a speculative glance from a customer, and a question: "¿Habla Español?"  “Un poquito,” I’d respond. Then I’d say that my father was from Puerto Rico. The man (they seemed like they were always men) might respond favorably, but often, they would not. Not only was I half, I was the wrong half. And despite my hometown having an annual Hispanic fest, I’ve never felt entirely comfortable going there. When I go to Germanfest, I don’t feel any sort of kinship either, partially because I detest beer and sauerkraut, and while polka music is peppy, the only music I really can get down to is Latin or EDM. Dancing is seductive, and polka just isn’t sexy.

When I was a little kid, I knew I was different, but I never realized that there were hundreds of thousands, perhaps millions of other children in the United States who had hybrid ethnicity just like me. Not just one Hispanic parent and one white parent, but many combinations—maybe one Asian parent, or one Black parent, or any of the myriad combinations that were more common in major cities than the minor Midwestern town I lived in. How many of those kids struggled?

Every year, when the phone book would get delivered, my father would look up the number of Diazes in town, One year there was seven. The next year, there were more. Now, I don’t know how many there are. A couple of years ago, Coca-Cola started printing names on their 20-ounce bottles. I found a Diaz on one of them and bought it and took a picture. I meant to keep the bottle, but I must have thrown it away.

"According to the United States government, Hispanics can be of any race, yet Hispanic so often gets classified incorrectly as a race."

It’s now 2019, and the last couple of years have been scary for people of color here in the United States. I’ve been lucky; I can’t remember the last overtly racist comment made to me. I went on vacation with a friend a year ago and plunked my tanned leg next to hers, took a picture, and posted it to Facebook, asking, “Guess who’s the Irish one?” My friend said she doesn’t think of me as Hispanic. I don’t remember asking why. I should have.

I feel I’m not fully accepted by the Hispanic community, yet I’m not completely accepted by the non-Hispanic community, either. It’s frustrating. According to the United States government, Hispanics can be of any race, yet Hispanic so often gets classified incorrectly as a race. So when I fill out a form and I can choose both Hispanic AND white, I choose both. But frequently, I have to decide: Hispanic OR white. And that irritates me. Is Sammy Sosa Hispanic or black? Is Cameron Diaz Hispanic or white? What about Charlie Sheen? His dad, Martin Sheen, is Spanish and Irish. Charlie’s brother, Emilio Estevez, definitely has the "ethnic" name, but does he “look Hispanic”? And if you are of purely Spanish descent, are you even considered Hispanic? I wonder what Spaniards think, when they come to the United States, and they start talking. Do they feel discriminated against? If they are blue-eyed and blonde, are they seen as a novelty and not a threat?

I worked at a potato chip factory for a few weeks last summer, and the mostly Spanish-speaking employees assumed I didn’t speak English. I look stereotypically Spanish: dark, curly hair; average height; skin a shade darker than the "norm." I got to “practicar mi Español,” but just like in grade school, I wasn’t entirely accepted.

I wince a little when my neighbor up the street, who has watched my pets when I’m out of town (and I return the favor) spits vitriol about the “fuckin’ Mexicans” who live next door to her. I don’t know if I’m the “spic down the street.” I hope not.

But I’m afraid to ask.

Am I Latina Enough? And Other Concerns I Have

Tags: identity , race , personal essay
Support Feminist Media!
During these troubling political times, independent feminist media is more vital than ever. If our bold, uncensored reporting on women’s issues is important to you, please consider making a donation of $5, $25, $50, or whatever you can afford, to protect and sustain BUST.com.
Thanks so much—we can’t spell BUST without U.