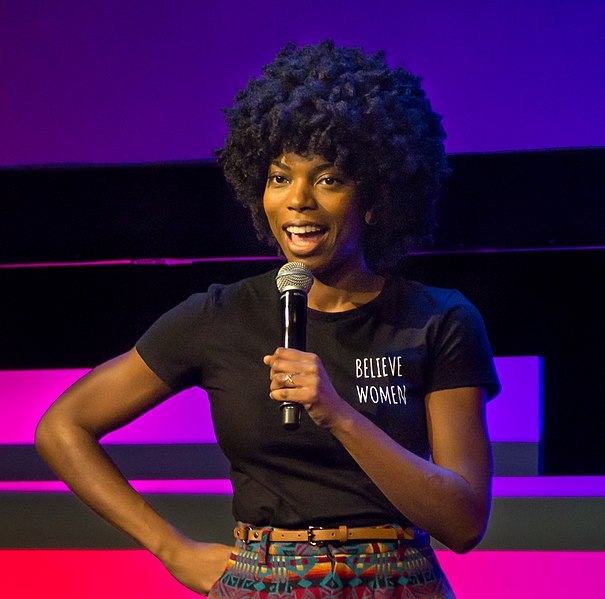 On January 9th, comedian and SNL alum Sasheer Zamata performed a set at the L.A. club Dynasty Typewriter and not only called out Louis C.K. in regard to his being sexual harasser, but also called out the “lazy-ass” writing in his return to stand-up.

Zamata was responding in particular to a set of Louis C.K.’s that leaked in January after an audience member recorded the entire hour of standup in mid-December, Vulture reported. Some of the subjects of Louis C.K.'s roasting were the surviving teens of the 2018 Parkland school shooting.

“Fuck you, you’re not interesting cause you went to a high school where kids got shot. Why does that mean I have to listen to you? How does that make you interesting? You didn’t get shot, you pushed some fat kid in the way, and now I gotta listen to you talking,” C.K. said. He continued, saying that young people should be busy “finger-fucking each other and doing Jell-O shots.”

Zamata began her own bit by comparing C.K.’s jokes to eating pigeon when you ordered chicken: “It may taste the same at first, but the more you chew on it, the more you realize the quality has decreased. And then if you try to complain about it to the manager, he takes his dick out and calls you the N-word.”

Zamata states that she used to think C.K. was really thought-provoking, but provides her own reasoning as to why that isn't true anymore.

“Some people heard his set and they thought ‘He’s a comedian, he can say whatever he wants onstage as long as it’s funny,’ and I actually agree with that,” Zamata told her audience. “I don’t think any topic should be off limits, that you should be able to say whatever you want onstage, but you have to have a take. You can’t just get up onstage and say blatantly racist, transphobic, victim-blaming statements without a punchline! Like, who are you—all of our uncles?”

Zamata's revision of the C.K. joke is even better than its introduction, and she provides evidence for her statement about punchlines. She took all the same content of the C.K. joke but reworked it in a way that, well, is actually funny:

He says that the survivors of the shootings shouldn’t be spending their time talking to Congress about gun control. Instead they should be ‘finger-fucking’ each other. But who’s to say they’re not? They can do both! They’re teenagers—of course they’re finger-fucking each other! They’re probably fucking each other more on that bus ride to DC cause they’re so jacked up on adrenaline that they’re like, ‘I gotta burn some steam off before I make this speech—somebody fuck my face!’ They just know how to separate sex from work, which I understand is a hard concept for Louie to grasp. Which is ironic, because we all know how much Louie loves to grasp hard concepts.

The leak of C.K.'s show has been removed from the internet, but you can listen to Zamata's cunning revision on Soundcloud.

An Evening Of Storytelling, Comedy, Live Music, Art And Activism At Stories Of: Abortion With Planned Parenthood NYC