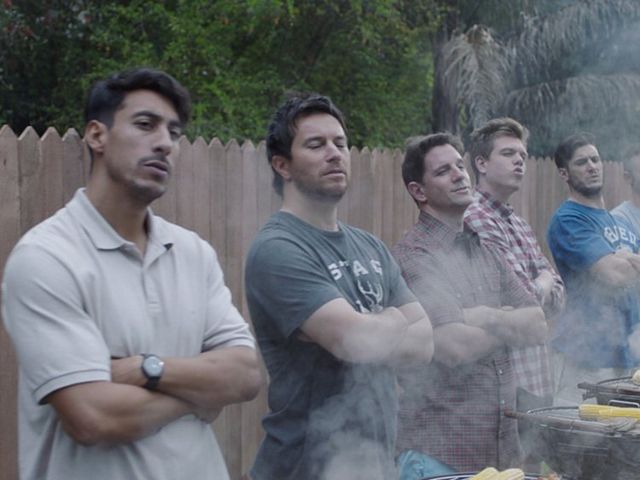 A Gillette ad—or, as the brand calls it, a "short film"—is going viral, drawing almost five million views on YouTube since it was released on Sunday. The ad appears to support the #MeToo movement and confront toxic masculinity: it begins with scenes of men and boys of various ages gazing moodily into their mirrors as we hear snippets of audio news reports: "Bullying," "the #MeToo movement," "masculinity."

The ad then cuts to an old Gillette advertisement with the slogan "the best a man can get," and the voice-over asks, "Is this the best a man can get?" The ad then shows various scenes of bullying and sexual harassment. "It's been going on far too long. We can't laugh it off. Making the same old excuses," the voice-over says, before cutting to a long line of men grilling various meats and vegetables while chanting, "Boys will be boys." The voice-over continues, "But something finally changed," and cuts to clips of news reports about sexual assault and sexual harassment.

The ad ends with a call to visit thebestamancanbe.org; the website redirects to a page on Gillette.com that includes a note about the campaign reading, in part:

It’s time we acknowledge that brands, like ours, play a role in influencing culture. And as a company that encourages men to be their best, we have a responsibility to make sure we are promoting positive, attainable, inclusive and healthy versions of what it means to be a man. With that in mind, we have spent the last few months taking a hard look at our past and coming communication and reflecting on the types of men and behaviors we want to celebrate. We’re inviting all men along this journey with us–to strive to be better, to make us better, and to help each other be better.

The note says that as part of the ad campaign, Gillette will donate "$1 million per year for the next three years to non-profit organizations executing programs in the United States designed to inspire, educate and help men of all ages achieve their personal 'best' and become role models for the next generation," beginning with the Boys & Girls Clubs of America. Because this is Gillette.com, tabs on the page direct readers to "Shop Products," "Shaving Tips," "About Gillette," etc.

The Gillette ad is earning backlash from misogynists, including Piers Morgan, who tweeted, "I've used @Gillette razors my entire adult life but this absurd virtue-signalling PC guff may drive me away to a company less eager to fuel the current pathetic global assault on masculinity." But keep in mind that, like the Unilever-owned  Dove "Real Beauty" ads before it, the Gillette ad is using feminism as a marketing strategy—not a business strategy.

Remember that this "short film" is an ad selling you razors, and that Gillette is owned by Procter & Gamble. Procter & Gamble is one of the biggest advertisers on Fox News, as Fast Company points out. The network has employed men accused of serial sexual assault and/or sexual harassment (Roger Ailes, Bill O'Reilly, etc.), and promotes views that go against the #MeToo movement. Procter & Gamble is also one of the remaining advertisers of Tucker Carlson Tonight, a Fox News program that lost many of its advertisers after Carlson said immigrants make the US "poorer and dirtier and more divided." As a company, Procter & Gamble also has a track record that includes accusations of child labor, workplace sexual harassment, and discrimination against Muslim employees.

Sure, "do better" is an accurate message to send to men. But this ad just wants you to buy razors from a particular company, a company that does a lot of harm.

In a 2018 Racked piece called "There's No Such Thing As A Feminist Company," writer Amanda Mull reminds us:

Companies aren’t people, they aren’t your friends, they don’t have your best interest at heart, and they’re certainly not feminists. You may have to work for one to earn money and buy things from them in order to live your life, but the only clear-eyed way to regard a corporation is, at best, as an adversary. No matter what they might say when trying to separate you from your money, that’s certainly how brands see you.

Or as writer Jaya Saxena tweeted about this particular ad:

I keep thinking about this and it bums me out because the alternative is always like, what are gonna do, buy from the overtly misogynistic companies? But please, please don't mistake this for activism or politics. This is a side effect, not an action.

In other words, don't let the branding trick you: this Gillette ad is just a cash grab.

Here's A Genius Way To Take Down Sexist Ads

Tags: Gillette , advertising , ads , Procter & Tamble
Support Feminist Media!
During these troubling political times, independent feminist media is more vital than ever. If our bold, uncensored reporting on women’s issues is important to you, please consider making a donation of $5, $25, $50, or whatever you can afford, to protect and sustain BUST.com.
Thanks so much—we can’t spell BUST without U.