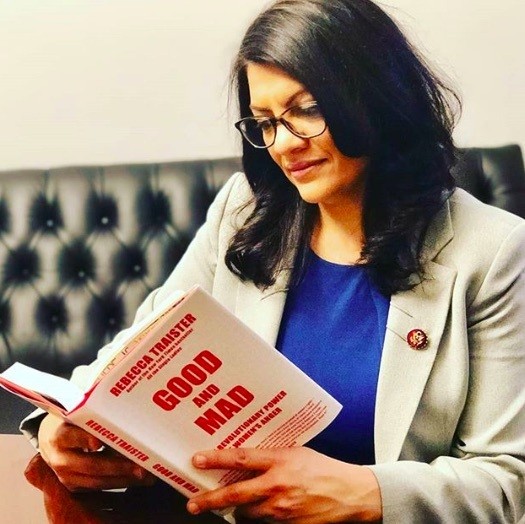 “We’re going to impeach the motherfucker!”

In gleeful disbelief, I read these words aloud to my roommate on January 3, just hours after the members of the 116th Congress, the most diverse in America’s history, were sworn in. I couldn’t believe the news I was reading; at an event for MoveOn.org after the swearing-in ceremony, new representative Rashida Tlaib (D-Michigan) not only asserted her intention to impeach Donald Trump, but also used the queen of all expletives to describe him.

“People love you. And you win,” she can be heard telling a cheering crowd in a video making the rounds on Twitter. “And when your son looks at you and says, ‘Momma, look you won, bullies don’t win.’ And I said, ‘Baby, they don’t.’ “Because we’re gonna go in there and we're going to impeach the motherfucker.”

Condemnation of Tlaib’s language was swift. Pearls have never been clutched so tightly. Republicans and Democrats alike chastised the new representative for her lack of civility. On Fox News, Rep. Joe Manchin (D-West Virginia) called her remarks “horrible.” “No one should approve of that,” he said. On Twitter, newly minted senator Mitt Romney waded into the foray just days after publishing an op-ed in the Washington Post criticizing (weakly) the president’s lack of character. He tweeted, “Rep. Tlaib took the politics of Washington deeper down the drain. Elected leaders should elevate, not degrade, our public discourse.” Isn’t it a little late for that?

These critiques of uncivil language by men who have failed to condemn uncivil actions ring hollow. Admonishments of Tlaib’s remark—like Manchin’s and Romney’s—focus on maintaining the status quo and quashing dissent. This is “not how we talk about public leaders,” Manchin said. Why not? Public leaders do not inherently deserve respect simply by virtue of being public leaders.

According to Dictionary.com, the word “motherfucker” refers “to a mean, despicable, or vicious person.” To whom does the word better apply than a president who unceasingly abuses women, people of color, and LGBTQ people in his own speech? Who has detained immigrant children in “camps,” enacted numerous anti-LGBTQ policies, and rolled back dozens of environmental regulations? Who is an unindicted co-conspirator in the Michael Cohen case and has most certainly committed illegal, impeachable offenses? Who has been credibly accused of sexual misconduct and rape numerous times? If now is not the time to push the limits of our language to accurately name the perpetrators of injustice as such, when is the time?

Tlaib’s language was vulgar, sure, but it wasn’t inaccurate. If only her critics cared about the degradation of our democracy, planet, and collective humanity as much as they care about a woman of color’s just, albeit crass, call to action.

In a recent interview with the podcast the Jewish Women’s Archive, Rebecca Traister, author of Good and Mad: The Revolutionary Power of Women’s Anger, speaks to how women’s rage has historically been perceived as unruly troublemaking, rather than as changemaking. She says, “The anger of people with less power, anger at injustice and inequity is inherently received as chaotic, as a disturbance. Anger of the more powerful toward the less powerful… That's just registered as power.”

Tlaib’s remark has been categorized as inflammatory and even hysterical, rather than as a legitimate, justified reaction to outrageous abuses of power. Traister notes, “Our founders were angry at being taxed without being represented in British government. But we understand that to be the politics of revolution.” White men’s anger, Trump’s included, is seen as par for the course, necessary for progress. Women’s anger, especially the anger of women of color, is seen as an affront to decorum, a “degradation of discourse.”

Unlike Tlaib’s critics, when I read the congresswoman’s words aloud, vulgarity and all, I felt hopeful. How refreshing to see a public figure react to Donald Trump’s cartoonishly evil administration with the degree of rage that many of us have been feeling. Her words are incredibly validating; it’s as if we finally have confirmation that, no, this is not normal, and yes, it our anger and fear is warranted.

Since 2016, public leaders have encouraged their constituents to avoid stooping to the president’s level; “when they go low, we go high," as Michelle Obama famously put it. Of course there is value in taking the high road and responding to cruelty with kindness. However, when “going high” means going about business as usual in times of crisis and obscuring the truth with conventional political rhetoric and niceties, it is complicity.

On Friday, January 4, Tlaib released a statement about the controversy on Twitter. “I will always speak truth to power. #unapologeticallyme,” she wrote. In the days since, she has continued to defend her remarks. She told the podcast Democracy Now! that she does apologize for "the use of [her] words...distracting us," but she “won’t apologize for being upset or angry." On CNN, she asserted, “I am not the only person who is this angry or this upset," No, she isn't.

Thank you, Representative Tlaib. Go get him.