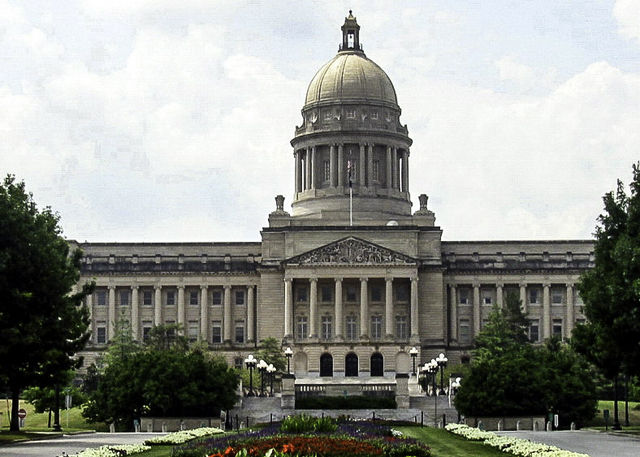 In arguably their most aggressive attack on Roe vs. Wade yet, Kentucky lawmakers introduced a bill that would make it a felony for doctors to perform an abortion once a fetal heartbeat can be detected, which is around six weeks of pregnancy. Considering most people are not even aware they are pregnant at six weeks, Senate Bill 9 would make it almost impossible for people to have abortions. Now that Justice Anthony M. Kennedy has retired, abortion opponents are hoping the Supreme Court will be more receptive to limiting abortion rights, the Los Angeles Times reports. Kennedy was replaced by Brett Kavanaugh, who voted as a “federal appeals court judge in 2017 in favor of delaying an abortion for a pregnant immigrant teenager in federal custody.”

Since taking full control of Kentucky’s legislature in 2017, Republican lawmakers have relentlessly pushed anti-abortion measures, and three of those measures are currently "mired in lawsuits," as the Los Angeles Times puts it. Courts overruled two of anti-abortion laws that Republican lawmakers pushed through, but Republican governor Matt Bevin’s administration has appealed in both cases. One law would require doctors to perform ultrasounds as well as present and describe the images to women, whose only option in such circumstances was to avert their eyes. U.S. District Court Judge, David Hale, blocked the law, citing concerns over “psychological harm caused by the law’s requirement to show and describe ultrasound images to women seeking abortions,” 89.3 WFPL reports. The other law would require that abortion clinics have written agreements with a hospital and ambulance service in case of medical emergencies, threatening the EMW Women’s Surgical Center in Louisville, Kentucky’s last abortion clinic. U.S. District Judge Greg Stivers ruled that the law violates constitutional protections. In the third case, a law banning a common second-trimester abortion procedure is pending a ruling by a federal judge.

While these extreme measures are in direct opposition with legal practices put in place by the Supreme Court’s 1973 Roe vs. Wade ruling, Kentucky’s latest anti-abortion bill seems to have taken priority in the state Senate. The bill was introduced Tuesday, January 8th, the opening day of the state's new legislative session. Senate Majority Floor Leader Damon Thayer hopes the bill will get a Senate vote this week. If the bill were to pass the Republican-led house and make it to the anti-abortion Bevin, who has said he is pursuing reelection this year, it would be an opportunity to attach his name to a stance that is favorable amongst his conservative base. The American Civil Liberties Union, in legal opposition to the state’s anti-abortion measures, warns that the most recent bill will provoke further legal disputes. Brigitte Amiri, an attorney for the ACLU, called the bill “blatantly unconstitutional.” Amiri told the Los Angeles Times this effort would maintain Kentucky’s reputation as “one of the most hostile states” to abortion rights in the U.S. “This is a virtual ban on abortion,” she concluded.

An Evening Of Storytelling, Comedy, Live Music, Art And Activism At Stories Of: Abortion With Planned Parenthood NYC

Tags: Roe vs. Wade , Kentucky , abortion , pro-choice , women's rights , reproductive rights , feminism,
Support Feminist Media!
During these troubling political times, independent feminist media is more vital than ever. If our bold, uncensored reporting on women’s issues is important to you, please consider making a donation of $5, $25, $50, or whatever you can afford, to protect and sustain BUST.com.
Thanks so much—we can’t spell BUST without U.