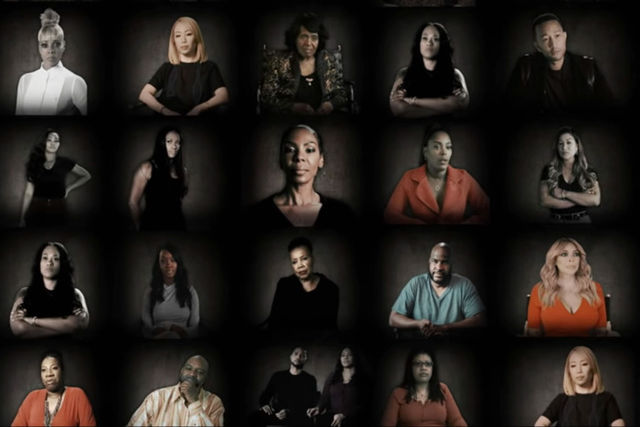 There is a racial divide on social media regarding Surviving R. Kelly. Most black folks I know have posted about the docuseries (thankfully, black people in my networks are expressing support of the victims of sexual abuse and coercion, though their posts suggest to me that is not the case with their entire friends network). In contrast, nearly all white folks I know are not even acknowledging the docuseries, the R. Kelly conversation, nothing.

This divide/contrast reminds me that white people are not required to know what’s happening to and among black folks. Yet black folks always know what’s happening with white people—it’s essential for our survival. So to every white feminist I know who posted, raged, and bemoaned the events surrounded Dr. Blasey Ford’s testimony and the Kavanaugh appointment: Where is your outrage for the many black girls and women who have been victims of R. Kelly for years? If you don’t know what I’m talking about, ask yourself why. Why are you not hearing about these black women’s stories which we’ve been talking about for years (see #MuteRKelly)?

Why do we not have national rallies and speakouts for black women and girl survivors? Why is our pain less visible, less believed, less publicized, less cared about? And how are you complicit in this?

Here’s what I want white allies to do:

1. Go read about #SurvivingRKelly or watch the docuseries if you have access (it's available on Lifetime).

2: Stop listening to his music: hit skip on Pandora, change the radio, delete him off your Spotify.

3. Talk to people in your networks about the docuseries and R. Kelly’s well-documented, long-standing, and continuing abuse of black girls and young women.

4. Increase your exposure to black activists and intellectuals, especially black feminists on social media, so next time something like this emerges, you’ll be part of the conversation from the start. On Twitter, I recommend following Brittney Cooper (@ProfessorCrunk), Roxane Gay (@rgay), Treva Lindsey (@divafeminist), Raquel Willis (@RaquelWillis_), and Surviving R. Kelly executive producer dream hampton (@dreamhampton) to start.

I also want to respond to the multiple folks who have mentioned to me their fear of speaking against a black man as a white person, and their fears of being racist. Is your fear of being called racist stronger than your desire to fight for black women and girls? Is your allyship about not appearing racist, or is it about fighting injustice?

Many who have expressed this anxiety are folks I respect and consider on my “side” in the grand scheme of making this world better, but I think it’s worth exploring how liberal white guilt can impede action. Many of the folks with this concern are people I’ve seen be vocal about sexual violence by white men, so choosing to not be vocal about sexual violence by black men—leaving that to black women only (even as we speak out against sexually violent white men, too)—is concerning.

Your place is on the side of justice, and if someone says “you’re being racist against this black man,” you can pull all your receipts of continued engagement with #MeToo and the intersectional fight against all sexual violence perpetrated by all people (led by Tarana Burke, on Twitter as @TaranaBurke).

There are also ways we can speak out against this violence without demonizing perpetrators, by acknowledging the complexities of multiply marginalized lives and our own vexed positions, while still insisting that what’s wrong is wrong. When you fear being called out/in more than doing/saying what you know is right (but maybe not knowing the best way to do it), complicity and complacency win over. I hope white allies read this as a call-in, a conversation among comrades to challenge each other to be better. I hope you would each do the same for me when I fuck up or miss the mark. Because I do. I will again. We have to be in this together, not for our reputations, not for appearance, but for actual radical change to end sexual violence.

With that goal in mind, I also want to consider how we can talk about Surviving R. Kelly outside the logic of the prison industrial complex. Many people have responded to my discussion of R. Kelly in carceral logics, saying some variation on “his ass should rot in jail,” if not calls for his death. Are there other ways we can imagine justice, accountability and healing?

Prison abolitionist Mariame Kaba has said that as people raised with carceral logics, it’s hard for us to imagine or desire alternatives. The prison industrial complex has limited how we think about justice—even though other nations do things differently. A lot of prison abolitionists and restorative justice activists, however, are working to imagine justice outside of the prison systems. Walidah Imarisha (@WalidahImarisha), for example, says all organizing is an act of science fiction—trying to make a world that doesn’t (yet) exist. This Black Youth Project article is a brilliant reflection on the struggle to imagine a world without prisons, but believing fiercely in the need to turn away from the US’s patterns of violence and abuse that birthed the prison industrial complex.

What could we imagine would hold R. Kelly accountable for the harm he has done that isn’t (or isn’t just) prison time? Paying for his victims to receive lifelong therapy and to attend school or get job training? A ban on contact with anyone under 21 years of age? Required therapy?

What would it take to have a full divestment from his music by platforms like Pandora, iTunes, Spotify, and Amazon Music, as well as having his record label drop him? How can we refuse as a culture to let him continue to have so much financial and social power?

I also encourage all of us calling for justice for black women right now to consider what it would mean to hold the many people who looked the other way, profited from, or facilitated R. Kelly’s abuse accountable.

One way would be for musicians who have worked with him to donate their royalties from that music to organizations which focus on supporting black women and girls, and/or survivors of sexual and domestic violence. I’m sure there are other ways, too.

What I’m trying to say is that I want us to stretch our brains to consider what we really want here (justice, social change, accountability, healing) and how incarceration of one or more person(s) does or does not move us closer to the thing we actually want. When we’ve done that thinking, we can include these alternatives in our calls for justice, rather than relying on a racist, cissexist, ableist, homophobic, classist “criminal justice” system to help us as a society move past our racism, cissexism, ableism, homophobia, and classism.

For me, the overarching questions are: How do we address the devaluing of black girls and women in our country? How do we look beyond this particularly bad individual to the many systems, including cult of celebrity and misogynoir, which allowed this individual to do harm for so long? To me, these questions reflect the deeper, harder work that is required next, once we’ve been vocal in support of black women survivors and opposition to R. Kelly, as I called for before. This is the work of imagining systemic and social change beyond our broken, harmful system.

Surviving R. Kelly is re-airing on Lifetime this Friday, January 11, beginning at 6 p.m. It's also available to watch online.

R. Kelly Survivor Jerhonda Pace Asks The #MeToo Movement, “What About Us?”

Dr. Sami Schalk is an Assistant Professor of Gender & Women’s Studies at University of Wisconsin-Madison and the author of Bodyminds Reimagined. Dr. Schalk’s interdisciplinary research focuses broadly on disability, race, and gender in contemporary American literature and culture. She has published on literature, film, and material culture in a variety of peer-reviewed humanities journals. Currently she is working on a second book project on disability politics in post-Civil Rights black activism. Learn more about her work at samischalk.com and follow her on Twitter @DrSamiSchalk.