6 Things You Need to Know About Human Trafficking 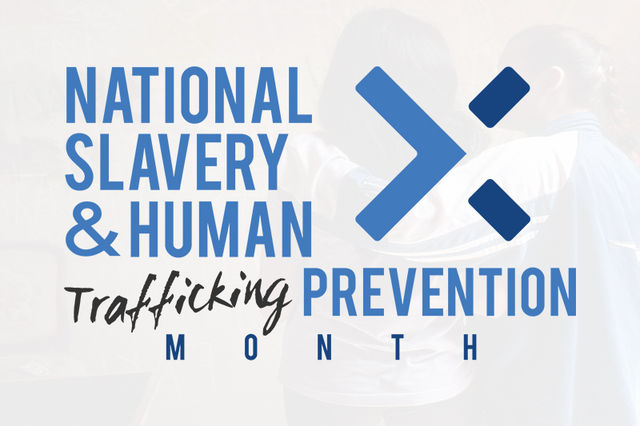 Since 2010, January has been declared National Slavery and Human Trafficking Prevention Month. Because of the insidious nature of the crime, human trafficking is often hard to track, but International Labor Organization estimates put the number of trafficking victims at 40.3 million worldwide. About a fourth of these victims are children. Human trafficking is a widespread and horrendous crime, yet is also misunderstood. Here are some things you should keep in mind when you talk about human trafficking:

Congress passed the Trafficking Victims Protection Act in 2000, which created a federal criminal offense for those who engage in human trafficking, including both labor and sex trafficking. The act defines sex trafficking as “the recruitment, harboring, transportation, provision, or obtaining of a person for a commercial sex act.” The Polaris Project, a national organization devoted to eradicating this horrendous phenomenon, describes labor trafficking as “us[ing] violence, threats, lies, debt bondage, or other forms of coercion to force people to work against their will in many different industries.” In fact, most trafficking (around 80%) is thought to be labor trafficking. Sex trafficking and labor trafficking are often linked, but they are not necessarily the same thing. Public discourse about human trafficking can refer to both kinds, though many laws and policies make a distinction between the two.

Human trafficking does not always start with someone being kidnapped.

Not all traffickers are sketchy men, waiting in a dark ally to kidnap a helpless woman. While there a certainly cases of people being taken and forced into labor against their will, there are many reasons someone might end up in a trafficking situation. For example, a victim might have been promised a job working in the restaurant industry, only to arrive in a situation much different than she anticipated. A victim could enter the sex trade because prospects for other employment are scarce, and then find themselves unable to leave. Even if they might have a chance to escape, there are many reasons a victim might not be able to leave on their own accord. The Polaris Project writes, “Some lack the basic necessities to physically get out—such as transportation or a safe place to live. Some are afraid for their safety. Some have been so effectively manipulated that they do not identify at that point as being under the control of another person.” Though physical force and intimidation is often a big part of trafficking, the underlying psychological damage that keeps victims trapped is also worth discussing.

Human trafficking does not just happen in developing countries.

Human trafficking is not the same as human smuggling.

In fact, these are legally two distinct crimes. Human trafficking does not require transportation, whereas smuggling does, often involving border-crossing. While smuggling people from one place to another might sometimes be a component of trafficking, the crime of human trafficking itself always refers to the coercion of labor or services.

Human trafficking doesn’t just end when a victim is released.

Unfortunately, the terror of trafficking isn’t just over once the victim has left the trafficking situation. Lawmakers often focus on increasing penalties for traffickers, and not as much on providing services to victims. While putting traffickers in jail can provide relief to victims and remove criminals from the scene, the lack of funding and services can make it hard for victims to access the resources they need in order to get on with their lives. Residential centers designed to house victims often have a waitlist or they are not adequately funded. Many victims are unable to access healthcare or job placement programs. While being trafficked, some victims might have been forced to commit crimes or committed a crime to survive. Some states allow a victim’s record to be expunged, making it easier for victims to move on and find jobs, but not everybody is entitled to this sort of relief.

Human trafficking and laws about sex work are linked.

Sex work is not the same as sex trafficking. There is an inherent level of coercion in sex trafficking that isn’t necessarily present in sex work in general. But various approaches to legislating sex work might have different results on the reduction of human trafficking. Some countries, including Sweden and Norway, have criminalized the buying of sex, but have decriminalized sex workers. Due to its influence on other countries, this model has been referred to as the Nordic Model. In Sweden in particular, sex workers "make more money than their colleagues in other countries, [and] thanks to lobbying by sex-worker activists, they also have access to the country’s generous welfare state, including sick leave and parental leave," reports the Nation. There is some evidence to show that the Nordic Model has led to reduced rates of human trafficking, however, there is not yet a widespread consensus among social scientists and other experts. Some sex workers are opposed to the model, arguing that the policy increases the stigma that workers face, and therefore increases danger when sex workers have to deal with the police, landlords, or the courts—as in eviction cases or child custody cases. "The Swedish model really ups the stigma,” says Pye Jakobsson, the co-founder of the Rose Alliance, a Swedish sex workers’ organization, told the Nation. “And stigma affects absolutely everything.”

It would be helpful to examine our laws on sex work instead of having the knee-jerk reaction that sex work is always bad and everyone involved is automatically a criminal. Sex work and sex trafficking should not be conflated, but to divorce discussions of sexuality entirely from the discussion about trafficking does a disservice to eradicating the issue.

Unfortunately, the recently-passed FOSTA (Fight Online Sex Trafficking Act) and SESTA (Stop Enabling Sex Traffickers Act) bills of 2018 have taken this approach. These bills mean that websites can now be held legally responsible for posting ads advertising sex, which has detrimentally affected sex workers who have chosen their profession on their own accord. Previously, individual sex workers could use websites like Craigslist and Backpage to advertise their business and screen clients. They could connect through "the safety tool of communal 'bad date lists' ― websites where sex workers share information on bad or dangerous clients," reports the Huffington Post. Those sites have been shutting down in the wake of FOSTA-SESTA.

In a series of interviews featured on the Huffington Post, sex workers have been outspoken about the harm these bills cause them. As Melissa from Phoenix put it: "It’s forcing me to go back the streets, walking up and down trying to find clients. Now I not only have to deal with the police, but now I’m forced to deal with tricks that know this bill is in effect, and trust me, they are taking full advantage of it by being more aggressive. And unlike being in the safety of my room, I’m in their car, I don’t have the option to leave or kick them out. I’m literally stuck in their car until they are finished with whatever it is they want from me."

Bottom line: Human trafficking doesn’t exist in a vacuum, removed from the rest of the political landscape. We must examine how it sits at the intersection of economic policies and attitudes toward sex work. How might bad international trade policies lead to a climate where people feel desperate enough to perpetrate such a crime? How can our choices as consumers effect products being made by those who are being labor trafficked? How can we make laws that make sex work safer, while protecting sex trafficking victims? How might our attitudes toward criminality affect the way we view victims? These are complex problems that demand complex solutions. We don’t have to have all the answers just yet, but we shouldn’t be afraid to talk about this phenomenon in a more holistic and comprehensive way.

Photo credit: US Department of Defense