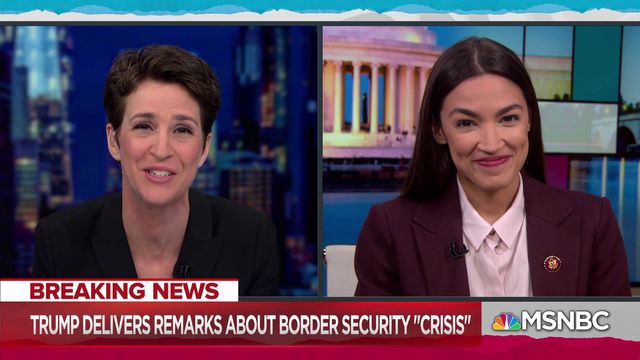 Alexandria Ocasio-Cortez has been sweeping the news cycle, and continues to show that she is not backing down to her opponents. In her debut appearance on The Rachel Maddow Show last night, she debunked many xenophobic and anti-immigrant comments Trump made in his national address.

I did not watch Trump’s address because part of my self-care is never listening to that man’s voice. But according to the Huffington Post, in his speech, he demanded that Democrats agree to put more than $5 billion into his infamous border wall in order to end the government shutdown.

Trump painted immigrants as criminals and killers, as he has done time and time again, in order to say that his wall is a homeland security issue and therefore a national emergency. He even said, “How much more American blood must we shed before Congress does its job?” The irony of this question cannot be understated—and Ocasio-Cortez made sure of it.

Ocasio-Cortez stepped in with an interview on MSNBC directly following the address. She started off a very impassioned and eloquent speech by saying, “No one should feel unsafe in the United States of America, and that includes our amazing and beautiful and productive immigrant community.”

Watch the full speech below.

WATCH: Alexandria Ocasio-Cortez delivers impassioned response to President Trump’s address: “The president should be really defending why we are funding [ICE] at all … right now, what we are seeing, is death.” pic.twitter.com/4Al4GLWUvB

At 16, Cyntoia Brown Was Sentenced To Life In Prison For Killing The Man Who Bought Her For Sex. 15 Years Later, She'll Finally Be Set Free.