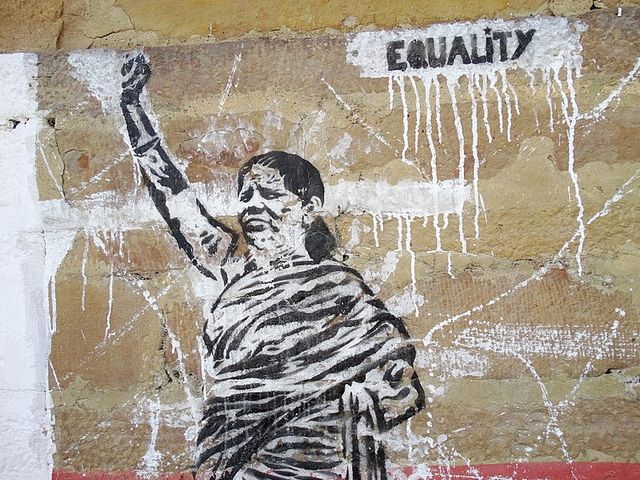 The Sabarimala Temple in Kerala, a Southern Indian state, has been the center of much contention over the past few months. For centuries, the Sabarimala Temple has banned menstruating women, typically between the ages of 10 and 50, from entering or coming close to the sacred structure dedicated to the Hindu god, Lord Ayyappa. According to NPR’s Lauren Frayer, Lord Ayyappa is “a Hindu god who devotees believe is celibate and cannot have contact with women of menstruating age. Some believe that’s because such women are impure. Others believe it’s because they are of childbearing age—fertile and thus a temptation to Lord Ayyappa.”

India Today reports that on September 28, 2018, the Indian Supreme Court ruled the Sabarimala Temple ban on menstruating women is unconstitutional because it's a violation of women’s right to equality and their right to worship. The temple's ban was legally lifted on October 17, but because of thousands of protesters in front of the temple, women of a menstruating age have been unable to enter the worshipping site.

The New York Times reports that on New Year’s Day, millions of women, led by Kerala’s Communist government, formed a human chain that stretched almost 400 miles from the north of the state all the way to the southern capital of Thiruvananthapuram. According to India Today, on January 2, with the support from the demonstration, two women—Bindu, age 44, and Kanaka, age 42,—entered Sabarimala at 3:45 am to worship.

Police were ordered to provide protection to any woman who desired to enter the temple. According to a local news source, The Indian Express, Bindu and Kanaka were dressed in all black and covered their heads, as they were escorted by police officers through a back service entrance, instead of the 18 sacred steps traditionally used by worshippers.

After the women entered the temple, news site Mathrubhumi reports that protesters blocked traffic, vandalized a government office, and pelted police with stones, which caused the police to fire tear gas into the crowds. Bindu and Kanaka exited the temple, and priests at Sabarimala immediately closed the temple for “purification rituals,” which, according to The Indian Express, usually occur after blood is spilled or a child urinates accidentally.

The conflict surrounding the Sabarimala ban is a complicated one, because it is gendered, political, and complex due to India’s caste systems and history. According to NPR, the Hindu nationalist Bharatiya Janata Party, the political party of India’s Prime Minister Narendra Modi, believes women visiting the temple to be a “conspiracy by the atheist rulers to destroy the Hindu temples.” Strong devotees of the Hindu religion see the visit and the lifting of the ban as a violation of customs, while Kerala’s Communist government and feminists find the ban to be a violation of women's rights.

The New York Times reports that Sabarimala devotees pride themselves in being progressive, not exclusionary, because Ayyappa's shrine is nominally open to all religions; this particular temple has not been known to practice caste exclusion; and priests have said they will admit transgender people who do not have a menstrual cycle. To Sabarimala devotees, this is not a discrimination issue; the partial ban is deeply rooted in Hindu tradition and customs. The New York Times noted the existence of a campaign started by female supporters of the ban called #ReadyToWait—this group of women respect the ban as a religious tradition, and they see no issue with waiting for menopause to enter the temple.

Due to protests and multiple petitions, according to The Times of India, the Supreme Court has scheduled a review of their decision for later this month.

Everything You Need To Know About The Women's March 2019