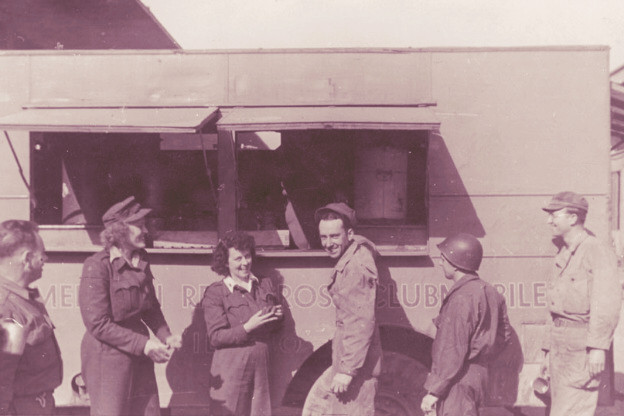 Taking part in any active duty during a war is tough, but when you’re hundreds of miles from home in a totally different country hounded by the constant threat of death, it’s gonna make you miss home comforts. Which is why during WWII, The American Red Cross came up with, erm… a truly innovative way to give their boys overseas a taste of back home (and by innovative, we of course mean batshit).

America joined the war effort in December of 1941. And pretty soon, The good old US of A was getting reports back that their overseas troops were miserable. Unsurprising, considering war is an utter horror!

So the American Red Cross decided to try and bring US home comforts to Europe. They set up clubs and lounges in a blitz-torn London and at some surrounding army barracks, where there were dances, coffee, food, and good times all round.

But what about the boys about to be shipped off to France? After all, they were feeling the fear most of all!

The Army asked The Red Cross to step in again and help. New York banker Harvey. D Gibson happened to be the American Red Cross Commissioner to Great Britain, and he had an idea!

What if they could give the American’s the same home comforts, but on wheels? Thus, the Clubmobile was born.

A hot cup of coffee would be easy enough to serve up. But what about classic American food? Now obviously, they couldn’t serve up hamburgers from a tiny wagon on wheels that was parked next to a battlefield.

So they came up with a close second, something that would surely bring a tear of joy to every traumatised soldier—doughnuts.

A prototype Clubmobile was quickly pulled together, from an adapted Ford truck with a 10 horsepower engine that was dubbed the "St. Louis." Inside the truck was a little kitchen, complete with doughnut maker and a hob to boil up water for coffee.

Next they had to staff it. So a call was sent out across America for Clubmobile Girls. You had to be between the ages of 25 to 35 (so, hardly a girl then) and have some college education or work experience. You also needed to be "healthy, physically hardy, sociable and attractive."

They were inundated with applications from women who wanted to help with the war effort and have an adventure overseas. These girls were quickly recruited and trained up on how to use the doughnut machine and make coffee by the bucketload…I guess they hoped that dodging bullets would hopefully just come naturally.

A trainee Clubmobile girl Rosemary Norwalk wrote to her family in 1943 that:

“The biggest surprise to me has been the girls—almost without exception they‘re a cut above, and for some reason I hadn‘t expected that. There‘s not a dull one in the bunch.” 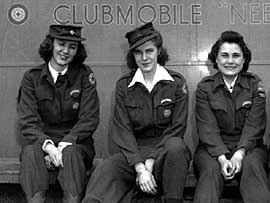 The initial pilot Clubmobile was a roaring success!

So the Red Cross adapted a handful of London Green Line Buses to become Clubmobiles. These ones even had a small lounge, complete with a victrola, records, and paperback books.

The "girls" also fought to get more useful items added to their Clubmobiles, asking for gum, cigarettes, candy, and (of course!) first aid kits for the soldiers. These women were looking out for their boys.

But these women were about to need A LOT more than first aid kits, because the Allied Army was cooking up something big: The Normandy Invasion of 1944.

And, of course, for such a big fight, they wanted the Clubmobiles along to follow the army and keep troops' morale up.

But they couldn’t take the buses overseas. So the super hardy armored Clubmobile was born. Made from converted two-and-a-half-ton GMC trucks. They had the kitchen and the lounge room (which doubled as bunks if the women couldn’t get to the base), and they even adapted one as a mobile cinema.

The Clubmobile girls would be driving these trucks and were trained on how to maintain them throughout their time overseas. Suddenly, these women were learning new skills and being given responsibilities some of them never dreamed they could have. 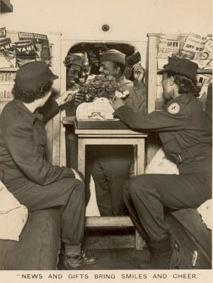 Advert for Clubmobiles. Because of segregation, there were separate ones for white and black troops.

These women were in the thick of war and experienced the hardships and horrific injuries the soldiers faced every day. They took their role as relief from the fighting seriously.

Most of the women were single, with a few exceptions. Eleanor Stevenson worked as a Clubmobile girl so she could follow her new husband, soldier William Edward Stevenson, through enemy territory and keep involved in the war effort.

That, right there, is true love.

It was hard work operating the Clubmobiles. Shifts started at all hours, and women did regular shifts from 8pm to 7am. The conditions were hellish, and they were expected to stay open through all weather. Not all of the women could do it.

Mary McLeod from Oregon lasted six months on the Clubmobiles before ill health had her request to be sent back to a land club. She was in her early 30s during her stint as a Clubmobile girl. She wrote home in 1944 that working took a:

“―terrific toll… you have to be the Amazon type and on the young side, and I am neither.”

Mary Metcalfe Rexford was in the first group of women to land on Utah Beach after the invasion, and she wrote about her experiences following the Army. The devastation they saw and even on one occasion having to stay up all night because the threat of Nazis launching an attack was a very real possibility. They witnessed horrors too, with Mary recalling she saw a:

“boy get blown up by a mine while eating his doughnut and coffee.”

But Mary had to continue serving and got on with her work.

And it wasn’t just the boys they served who lost their lives. Clubmobile girl Elizabeth Richardson lost her life in 1945; she was transferring to join the troops in Germany when her Red Cross plane crashed. 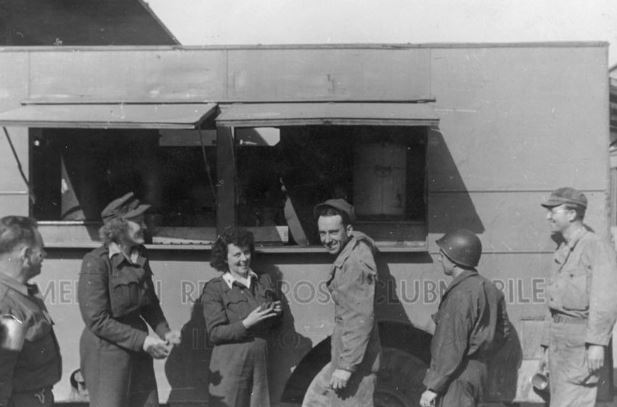 Elizabeth Richardson with her Clubmobile, just a few months before her death

The Clubmobiles and the women who ran them stayed with the Allied Army Forces through until the end of WWII on September 2, 1945.

In fact, the Clubmobile was such a success that a variation was used during the Korean and Vietnam Wars.

That was interesting, where can I find out more? Clubmobile Girls Mary Metcalfe Rexford's memoir Battlestars & Doughnuts, and historian James H. Madison's book on the experiences of Rosemary Norwalk, Slinging Doughnuts for the Boys, are both a look back at the Clubmobile Girls.