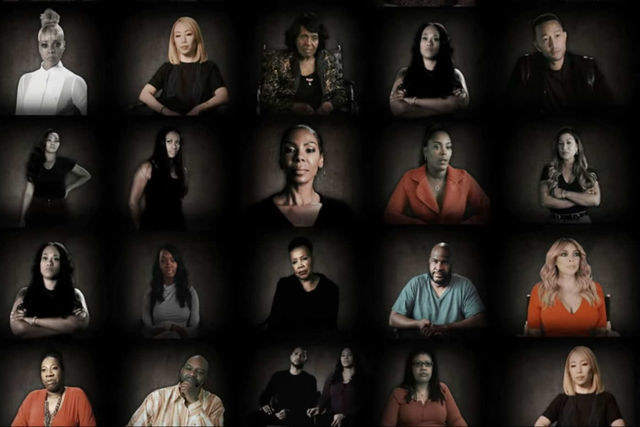 R. Kelly’s reputation as a sexual predator has been public knowledge for decades. In 1994, a 27-year-old R. Kelly married a 15-year-old Aaliyah, who he was mentoring at the time. In 2002, Kelly went to court after a video was released in which he allegedly performed sex-acts including urination on an underage girl. Kelly was charged with possession of child pornography as a result of the video, but he disputed, claiming he was not the man in the tape. The young girl refused to testify, and the jury ultimately found him not guilty.

One of the saddest aspects of R. Kelly’s court case is perfectly summarized in Madeleine Davies’ essay for Jezebel in which she states, “R. Kelly’s court case became a national punchline with most people going after R. Kelly’s urine kink rather than the true heart of his crimes.” It was easier for people to make sophomoric golden shower jokes than seriously consider that a popular artist could be a dangerous predator. Kelly seemed to face no consequences for his crimes, selling millions of records and continuing to receive nominations for awards.

The lack of accountability for perpetrators like R. Kelly is not unusual and it’s why the Lifetime docuseries, Surviving R. Kelly, is a necessary and important watch. The six-hour series is airing in three installments. Comprised of dozens of interviews with survivors of Kelly’s abuse (all women of color, some underage at the time of their assault), the series traces his controversial past, explores how the abuses happened, and explains how Kelly has been able to persist in this behavior for so long. Showrunner dream hampton told Entertainment Weekly:

“We wanted irrefutable evidence. Without leading any of these women, they all had the exact same stories, even if their interactions with R. Kelly were 15 years apart. All of them have stories about being physically abused, being videotaped without consent, being denied food or bathroom privileges as a punishment. All of them have stories about rules that were established early on.”

hampton has spoken candidly about ensuring the stories of these women will be shared and remembered. An active presence on Twitter, hampton promotes and engages in the dialogue around systemic racism, the silencing of black survivors, and holding abusers accountable.

Last night in NYC we screened #SurvivingRKelly for some press and some activists. If the talkback is any indication, there are so many opportunities for survivors and advocates to use this docuseries as a mobilizing tool. It is my great hope.

When the Manhattan theater hosting the initial premiere screening received violent threats, resulting in an emergency evacuation, hampton’s first priority was the survivors who were “retraumatized” by the experience, but ultimately she was not surprised. She spoke to ShadowandAct.com saying, “When I said I’m at war with R. Kelly, this is what I meant. I don’t ever want to underestimate him. This is a man who has built systems around his abuse, which is something that you’ll see in the docuseries.” Lifetime released a statement saying the threat “was an intimidation tactic from R. Kelly to further silence these women.” Andrea Kelly, R. Kelly’s ex-wife, has said he was the person behind the threats.

The final two instalments of the series will air Friday, January 4th at 9pm ET/PT and Saturday, January 5th at 9pm ET/PT. The first installment of the series aired January 3rd and can be viewed on Lifetime.com. “I hope that women can watch it in groups and take care of themselves. It’s going to be as triggering as triggering can be,” hampton noted in an interview with Complex.com. Despite the series' deeply upsetting subject matter, people are watching, engaging and tweeting their solidarity.

Black women, this will most likely be triggering tomorrow night. If you are watching, find someone to watch it with or turn off when you need to. I am in Harlem if needed! This is necessary but may open up some wounds. You are not alone & it was not your fault. Love you, mean it. https://t.co/9EtlMZF3g1

DVR is set. #SurvivingRKelly Thank you @lifetimetv for making this important film. WHO ELSE IS WATCHING WITH ME?!?!?! https://t.co/oBj73q6851

#SurvivingRKelly documentary airs in three days on @lifetimetv and it is riveting. It’s a must watch for those of us who believed his survivors from the start as well naysayers apologists and those oblivious to his years of allegations.

Tune in. Don’t look away. https://t.co/nz0zVcZICD

“Racial issues permeate every facet of this tragedy & a team led by EP @dreamhampton dissects them in all their complexity, frm Kelly’s exalted status w/in the African-American community 2 the apathy his structurally marginalized accusers have faced for decades.” #SurvivingRKelly

Take care of yourself and others as you screen #SurvivingRKelly These are hard to hear stories about abuse but their told by survivors who deserve that you listen with an open heart pic.twitter.com/AkSfFX0jDp The 3 night docuseries event begins TONIGHT at 9pm on @lifetimetv

I will be watching. Please do not turn away from the pain of these women. https://t.co/SjSfOB8PEN

When asked if she has any final words on the matter, hampton told Complex, "Just believe black women. We tend to be the canary in the coal mine on a lot of these issues. It's no coincidence that #MeToo was founded by a black woman. Just listen to black women. That would be the last thing I want to say."