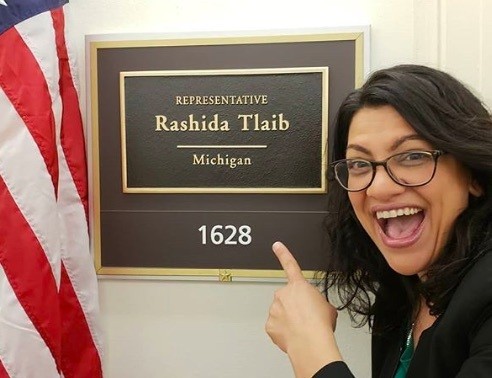 Many news outlets, including NBC News, reported on the impressive and historic diversity of the 116th Congress. Notably, Tlaib, along with Rep. Ilhan Omar (D-Minn.), are the first Muslim Congresswomen. Tlaib is the first Palestinian-American woman elected, and she wore a traditional Palestinian gown called a thobe to her swearing-in on Thursday. Thobes are hand-embroidered gowns that typically represent the city the wearer is from.

Sneak peek: This is what I am wearing when I am sworn into Congress. #PalestinianThobe #ForMyYama

Tlaib posted a sneak peek photo of her thobe on Instagram before the occasion, sparking the hashtag #TweetYourThobe. Women across the country responded, sharing photos of themselves and their friends and relatives in thobes. Many captioned the pictures with pride for their Palestinian-American heritage.

As if that weren’t enough to make us swoon, Tlaib followed up her swearing in by addressing a crowd of supporters saying, “When your son looks at you and said, ‘Mamma, look you won, bullies don’t win,’ and I said, ‘Baby, they don’t, because we’re gonna go in there and we’re gonna impeach the motherfucker.” The motherfucker she refers to is, of course, President Trump. Her statements were caught on video by the Wrap editor Jon Levine.

“We’re going to go in and impeach the motherfucker” pic.twitter.com/oQJYqR78IA

Tlaib’s office issued a statement Friday morning standing by her remarks. NBC News shared part of the statement, reading, “Congresswoman Tlaib was elected to shake up Washington, not continue the status quo. Donald Trump is completely unfit to serve as President. The Congresswoman absolutely believes he needs to be impeached and… will not stay silent.” Tlaib seemed to reference her remarks in a tweet sent Friday morning, as well. “I will always speak truth to power. #unapologeticallyMe,” the tweet read.

Other Democratic leaders in Congress are less eager to share plans for impeachment. Rep. Jerrold Nadler (D-N.Y.) disagreed Tlaib’s statements directly as he told CNN, “It is too early to talk about that intelligently… We’ll see where the facts lead – and maybe that will lead to impeachment. Maybe it won’t, but it’s much too early.” House Speaker Rep. Nancy Pelosi (D-Calif.) similarly told NBC on Thursday morning that the outcome of Mueller’s investigation will play significantly into whether or not impeachment is on the table.

Regardless, Tlaib’s thobe-wearing, swearing spirit is a goal for our 2019 mood board.

This day belongs to all of us. We changed Congress forever.

Other new members of Congress who rock our socks are not in short supply. According to The Hill, Omar, the first Somali-American elected, has been granted religious exemption to the rule banning hats in the chamber, and is the first person to wear a hijab on the floor. The Hill also reports that Rep. Deb Haaland (D-N.M.), the second Native American woman elected to Congress, wore garb traditional of the Pueblo of Laguna tribe to her swearing in. Lastly, Sen. Kyrsten Sinema (D-Ariz.), the only member of Congress who identifies as religiously unaffiliated (according to the Pew Research Center for Religion and Public Life) and the second ever out LGBTQ+ Senator, was sworn in on a copy of the Constitution rather than the Bible.

Here’s to a new year with kick-ass women at the helm!

Tags: Rashida Tlaib , thobe , Ilhan Omar , Congress , Deb Haaland , Kyrsten Sinema , representation , 116th Congress
Support Feminist Media!
During these troubling political times, independent feminist media is more vital than ever. If our bold, uncensored reporting on women’s issues is important to you, please consider making a donation of $5, $25, $50, or whatever you can afford, to protect and sustain BUST.com.
Thanks so much—we can’t spell BUST without U.