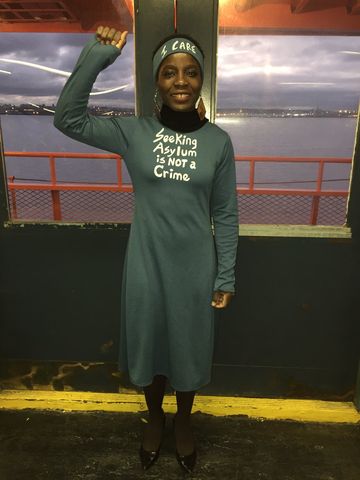 In the summer of 2018, a woman made history when she climbed the Statue of Liberty during a 4th of July protest. Her name is Patricia Okoumou, and on Monday, she was found guilty of trespassing, interfering with government agency functions, and disorderly conduct, The Guardian reports.

Okoumou, a naturalized US citizen born in the Congo, was demonstrating for the sake of immigrant rights, particularly for children who are being separated from their parents and kept in detainment.

Magistrate judge Gabriel Gorenstein acknowledged Okoumou’s activism and her concern for the children who, in Okoumou’s words, are “trapped in cages.” But for the judge, the law is the law, and a broken law must be reprimanded regardless of moral reasoning.

Her sentence, accounting for each charge, adds up to 18 months in prison, though she will be formally sentenced at a later date. After the trial, Okoumou – who wore a blue dress designed by Suze Stutsman with the words “Seeking Asylum is NOT a Crime” - spoke publicly outside the courthouse. She told the Guardian:

“While migrant children who simply came to this country, like our ancestors did, to seek happiness, freedom and liberation. Instead of welcoming them like Lady Liberty symbolizes, instead of treating them with kindness, what we showed them is cages. So if I go in a cage with them, I am on the right side of history.”

When asked by one of her own lawyers if she would climb the Statue of Liberty again, she said yes, according to The Guardian.

While the NYPD and prosecution saw the trial as a black-and-white reestablishing of the law, it is clear that not even their definitive standards of lawful or unlawful fail to include what is considered just by activists and the fighters for civil rights. The unheeding outcome of the trail only goes to show the ambiguities of the judicial system. It begs the question: how we can find justice in a legal system that would rather incarcerate an activist than relax its own rigid authority?

Nevertheless, Okoumou is confident in her actions and beliefs, and so are we. If you’d like to support Okoumou and stay connected to her cause during the upcoming months, visit patriciaokoumou.com.

16 Days NYC Is Shifting The Narrative Around Gender-Based Violence