Everyone, Particularly Offset, Needs To Leave Cardi B Alone 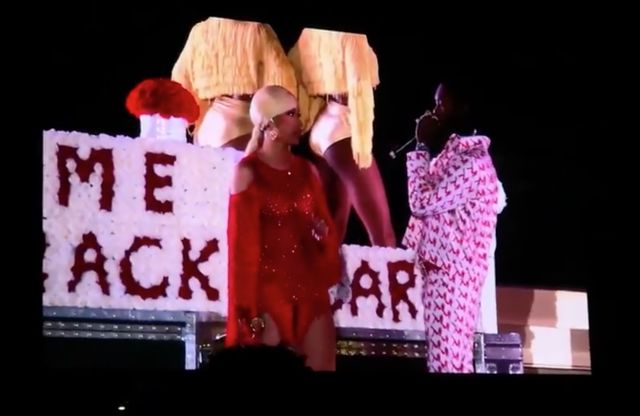 Saturday night marked the second day of the three-day long Rolling Loud Festival, in which Cardi B appeared as the first female headliner. What should have simply been yet another positive headline about Cardi B achieving a career accolade has been sullied by an awkward pop-up from her estranged husband Offset.

In video footage showing Offset's attempt to win her back, Cardi freezes with confusion onstage. Her dancers stop performing, and Rolling Out Fest personnel are seen rolling out red and white roses that read, “Take Me Back Cardi.” Offset appears, and Cardi shakes her head "no."

“I just wanna tell you, I’m sorry, bruh. In front of the world. Whatever I gotta do to show you...” Offset says.

The crowd’s reaction is mixed with cheers and boos.

As seen in numerous videos, Offset drops his mic. The two have an exchange, and anyone with basic understanding of body language and social cues would agree that Cardi is not feeling any of it. Rolling Loud cut the mega screen projection off, but the crowd could still see the two onstage. After a few more momenta of the two talking, Offset saunters off, leaving Cardi B visibly deflated. In one of the most painful transitions ever, her DJ queues up “She Bad.” The beloved Trap Selena proceeds to perform her up-tempo ass-shaking single without her regular degular energy.

Earlier this month, in a single (later-deleted) Instagram post, Cardi casually announced that the two were no longer together but were remaining amicable for the sake of their five-month-old daughter, Kulture. Since then, Cardi’s Instagram comments have shown a barrage of people—either fans, haters, or indifferent—encouraging her to take him back. The most prevalent voices were those of Offset and Cardi’s peers: the rap community. Rappers like 50 Cent, T.I., 21 Savage, and The Game, most of whom are also notoriously known for breaking monogamous relationships, all insisted that stepping outside of the marriage is a forgivable act. This type of rallying-together, boys' club behavior fuels toxic masculinity. There is never any accountability.

The discussion of infidelity is always especially humorous in the hip-hop community, as it is riddled with contradiction. Loyalty is one of the top commandments: death before dishonor. But who does that include? Too often men take into consideration how their actions could affect their relationships with other men. But why is it so difficult to keep that same energy with the women in their lives? Essentially the women that they start families with—why are they not worthy of that same respect and loyalty? Not to mention, none of these men would encourage their own daughters to continue on in relationships with men like them.

Also, most importantly, marriage was never this beautiful union between two souls that everyone is making it out to be. Marriage was the commodification of women, as women were merely viewed as property or a possession to obtain. Marriage was a transaction, from a woman’s father to her husband. Citing the traditional vows of “for better or worse” is only forcing women to uphold that end of the contract, without realizing someone who wants to be in a marriage would not constantly sneak and partake in activities outside of the marriage. Unless marriage is this one-sided institution that only one gender benefits from…

Throughout the weekend, Cardi B released a series of Instagram Live videos to discuss her feelings. Most of it was her defending Offset as the two share a child together and her publicist, Patientce Foster, who clearly assisted Offset in the ambush. “I know he’s trying hard," Cardi said in one video. "‘Cause I get it, it’s December. I get it, we have a daughter. He’s trying. I get it.” Cardi mostly disagreed with the reaction that what Offset did was manipulative. Toxic masculinity has a way of disguising itself as just harmless romantic gestures. He knew he had a wife and a daughter and the holidays were approaching when he was orchestrating that threesome or whatever else was going on in the relationship. The emotional labor that women often perform for the sake of their families is unfair and minimizes their own justified feelings.

It’s not simply a matter of someone trying to reconcile with their partner with a grand gesture—especially when the grandest gesture of all would to have been to just not cheat. However, Offset's actions are a matter of control. You don’t get to just cross your partner’s boundaries, doing whatever you want and asserting yourself wherever they are—and at their workplace, no less. So often when women are subjected to toxic behavior in relationships, the general consensus is that they should “just leave.” And now that a woman has left and her husband is saying sorry in front of everybody, she is being guilt-tripped into taking him back. Besides, flowers and apologies without action are really just pacifiers.

Many took Cardi defending Offset as proof that the two would reconcile. “This doesn’t mean I’m gonna get back together with him. I just don’t like that bashing online thing," Cardi said. She also mentioned her concern for comedian Pete Davidson, whose mental health may have been affected by the media storm surrounding his very public breakup with Ariana Grande. “I wouldn’t want my baby father to have that feeling,” Cardi said.

Just imagine if it had been Cardi who had been caught cheating in such a sloppy way, the responsibility would be completely hers and hers only. She would be shamed even more for her past as a stripper. No one would dare to tell Offset to take her back. They would have either laughed or pitied a man who had extended his hand in marriage to a former sex worker. And had she disrupted him at work, as he did her…

Ultimately, whatever Cardi B chooses to do with her relationship is her choice only. However, being harassed by her partner and his friends excusing his behavior is annoying and unnecessary, as it wouldn’t be reciprocated if the tables were turned.

The NYC Stripper Strike Is Protesting Racism, Discrimination In The Workplace