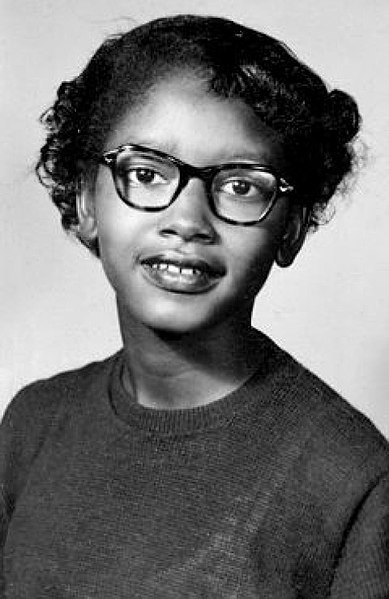 Claudette Colvin is the civil rights revolutionary whose name you haven’t heard of, but you should know. In March 1955, 15-year-old Claudette refused to give up her bus seat for a white passenger. She was dragged off the bus and arrested. Her actions that day sparked a movement that would end bus segregation in the US.

Sound familiar? That’s because it’s Rosa Parks' story. Except it happened to Claudette nine months earlier. And was then omitted from history. 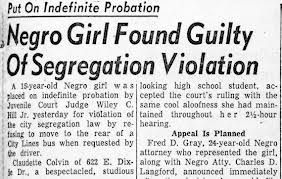 a newspaper clipping about Claudette's trial

On March 2, 1955, Claudette was coming home from school in Montgomery, Alabama.

A smart kid with a rebellious streak, Claudette dreamed of being an attorney, or maybe the President of the United States. Hey, she dreamed big.

And it was just this that made Claudette stick out.

She was proud of her dark skin and bucked the trend of straightening her hair, proudly wearing it natural. She was passionate about growing up to be someone who’d shake shit up.

The other kids thought that Claudette was "nutty," and she was okay with that. Still, growing up poor and black in Alabama, her dreams of a future as a civil rights fighter seemed a long way away. Every day, she boarded the bus home, walked to the back, and took a seat in the "colored section."

The back of the bus was a fact of life for Claudette.

Segregation was law, in school, church, theaters. Hell, Claudette hadn't even been able to try on her shoes before buying them, because she’d bought them from a "white" store. 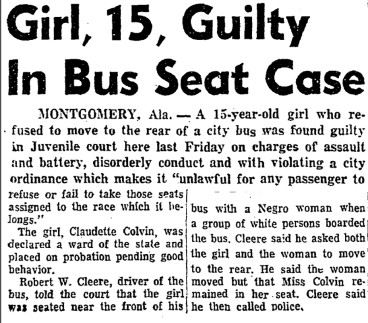 a newspaper clipping about Claudette's trial

But a fire was starting to burn in Claudette.

Three years earlier, police had descended onto her school, when they arrested her fellow student, Jeremiah Reeves.The 16-year-old black boy was charged with raping a white woman. Jeremiah said he was innocent, that the sex was consensual. But that didn’t matter. Either way, it was an interracial relationship.

It took an all-white jury less than half hour to find the teenager guilty, and six years later, he was executed.

So when Claudette sat in her seat that day in 1955 and refused to get up, she was thinking about Jeremiah. She was thinking about how she’d never experienced what it was like to be treated as an equal. How her life was seen as less than white lives. And how she’d paid for her seat on that damn bus and she didn’t have to move if she didn’t want to!

The bus driver threatened to call the cops unless Claudette moved for the white woman.

In a rare later interview, she said:

The white students on the bus turned on Claudette, shouting and ordering her to get up. One of the black students shouted back, "Well, she don’t have to do nothing but stay black and die."

When police boarded the bus, Claudette argued that she had paid her fare, and that right to her seat was her constitutional right.

The police didn’t care. They dragged the 11th grader off the bus. They beat her and arrested her. Then they took her, frightened and alone, to the city jail.

Later that night, Claudette was bailed out. She’d been charged with disorderly conduct, which meant she’d violated segregation laws. She was also booked for assault and battery (thanks to a small scratch an officer obtained while dragging Claudette off the bus).

Two weeks later, Claudette’s dreams of a bright future were pretty much over.

Her arrest was splashed across the papers, and some members of her community effectively disowned her as word of her actions spread.

And though two of the charges against Claudette had been dropped, the "assault and battery" charge was upheld. This was a serious charge she’d have permanently on her record.

And then there was the fear.

Claudette’s father stayed up all night with a shotgun close at hand, just in case the KKK should target the family for Claudette's actions and attack them in their home.

Claudette had no idea what was going to happen next, but if her current situation was a sign… it probably wasn’t going to be good. 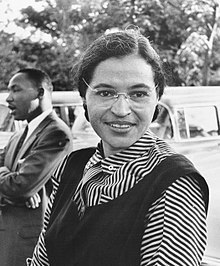 Rosa Parks was the secretary of the local Montgomery chapter of the National Association for the Advancement of Coloured People (NAACP). She’d already spent decades as a activist, boots on the ground, helping fight unjust court cases, organizing the local civil rights movement, and helping black teens who found themselves entangled in a whole heap of trouble, just like Claudette.

Two weeks after Claudette made her stand on the bus, Rosa got in touch. She invited Claudette to come and tell her story to a local youth group that Rosa ran. She did, and soon enough, Claudette was secretary of that group.

Rosa Parks would spark conversations with the kids, discussing the discrimination that ran rampant in Montgomery and what they could do about it.

When it felt like Claudette's life was over, Rosa Parks was there, making her peanut butter on crackers and delivering much-needed letters of support.

And then everything changed. Because Claudette was pregnant. 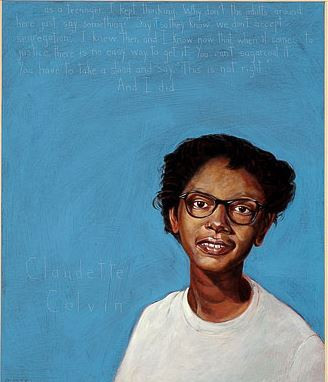 Whoever fronted this thing would have to be spotless. Someone the white press couldn’t tear down with ease. A black unwed teen mother was thought not to fit the bill.

Philip Hoose, who later wrote a book about Claudette, further explained the decision: “They worried they couldn’t win with her…Words like ‘mouthy,’ ‘emotional’ and ‘feisty’ were used to describe her.”

Another teen was briefly considered as a candidate from which to build a monumental lawsuit that could end bus segregation. Mary Louise Smith had also refused to give up her bus seat, just a few months after Claudette’s stand. However, following unsavoury rumours about Mary Louise's family, she too was turned down.

And so, on December 1st, 1955, when Rosa Parks refused to give up her seat on a Montgomery bus and was arrested, the revolution was built around her. 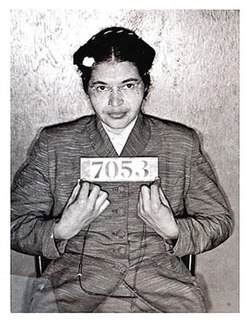 Rosa Parks' arrest led to the Montgomery bus boycott, which in turn led to the historic Browder v. Gayle case, which ended bus segregation in Alabama. For this trial, Claudette Colvin was a key witness. However, much like her stand on the bus, history has not remembered this. In fact, the Smithsonian National Museum of African American History referred to Claudette's arrest as a "test case" before Rosa Parks' true stand.

There were a myriad of reasons why Claudette was erased from history, but perhaps the most heartbreaking was this advice given by her mother: “My mother told me to be quiet about what I did. Let Rosa be the one. White people aren’t going to bother Rosa—her skin is lighter than yours and they like her."

And yet, despite it all, Claudette isn’t bitter.

She moved on and learned to accept the fact that it wasn’t her name that went down in history. She went on to have two sons and eventually settled in New York, where she helped organize the the National Health Care Workers’ Union, once described by Martin Luther King, Jr. as his favorite union.

It’s only in the last few years that Claudette Colvin has started to have her story heard. And true to herself, the first thing Claudette wanted to know when she found out a book was being a written about her was if it would be in schools.

This was interesting, where can I find out more? I’d suggest checking out Phillip Hoose’s book,Twice Toward Justice. It's written for a young audience, but it was the first book that started to get Claduette's story out to a modern audience.

Tags: Claudette Colvin , history , Civil Rights
Support Feminist Media!
During these troubling political times, independent feminist media is more vital than ever. If our bold, uncensored reporting on women’s issues is important to you, please consider making a donation of $5, $25, $50, or whatever you can afford, to protect and sustain BUST.com.
Thanks so much—we can’t spell BUST without U.