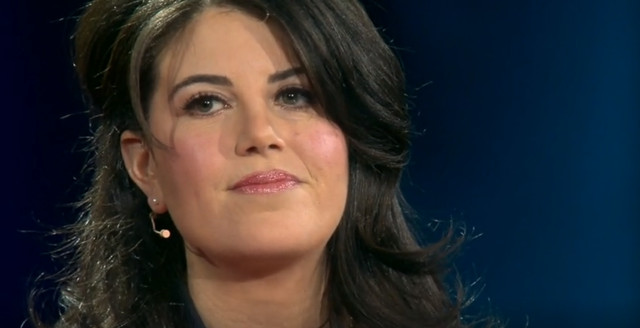 Anyone who has experienced painful or traumatic events in their life knows that the act of "going back" and revisiting the past can be a high-stakes move and is generally not suggested to be executed impulsively, or done out of whim, as it could disrupt one’s mental health. So, when I read that Monica Lewinsky is participating in a new docuseries titled The Clinton Affair, I found myself asking the same question that many had already asked her: Why?

Well, Monica Lewinsky has a formidable reason. Now age 44, Lewinsky writes, “Reliving the events of 1998 was traumatic, yes–but also worth it if it helps another young person avoid being ‘That Woman’-ed.”

In Lewinsky’s piece, titled "Who Gets To Live in Victimville?": Why I Participated in a Docuseries on the Clinton Affair and published in Vanity Fair on Tuesday, she defines the complex layer of understanding that has motivated her decision to jump back into the public eye and speak about her affair with former President Bill Clinton.

In her piece, Lewinsky poignantly states that there is hot debate around who gets labeled as a victim and why, writing, “The person at the epicenter of the experience doesn’t necessarily get to decide. No—society, like a Greek chorus, also has a say in this classification.”

Personally, I agree. The truth can be a looming and elusive force for someone who experiences trauma, especially because individuals seldom get to weigh in on the issues that deeply affect them. The topic of victimhood in the public arena can often silence the individuals so intensely, until they are no longer participating in a discussion but become a kind of passenger along for the ride, listening to the banter of everyone else who cares to share an opinion. I can say, as someone who has had my ass in that seat and who struggles with speaking about my own life’s traumas for that reason, I admire Lewinsky’s candidness on the matter. She acknowledges the interconnectedness of society and her voice, and how they shift and sway with each other. She writes:

Filming the documentary forced me to acknowledge to myself past behavior that I still regret and feel ashamed of. There were many, many moments when I questioned not just the decision to participate, but my sanity itself. Despite all of the ways I tried to protect my mental health, it was still challenging…

The process of this docuseries led me to new rooms of shame that I still needed to explore, and delivered me to Grief’s doorstep. Grief for the pain I caused others. Grief for the broken young woman I had been before and during my time in D.C., and the shame I still felt around that. Grief for having been betrayed first by someone I thought was my friend, and then by a man I thought had cared for me. Grief for the years and years lost, being seen only as “That Woman”—saddled, as a young woman, with the false narrative that my mouth was merely a receptacle for a powerful man’s desire.

But grief is not the end-all, be-all of this journey. In a lot of ways, Lewinsky is doing what she has always tried to do, which is tell her own story in her own words. Except now, 20 years later, she has learned more about herself and the complexity of society that she wrestled with as a young woman. Not only that, but The Clinton Affair is a female-driven project. Directed by Emmy-winning Blair Foster, two of the three main editors and four of the five executive producers are also women.

Lewinsky recalls an interview Clinton did with Dan Rather when the former President was promoting his autobiography in 2004. Rather asked Clinton why he had conducted an inappropriate relationship with Lewinsky. Clinton’s answer: “Because I could.”

Now, when people ask Lewinsky why she chose to participate in this series, she responds, “One main reason: because I could."

Recounting painful parts of our personal lives is never easy and often harmful if we undergo the task without assistance from mental health professionals (Lewinsky was seeing a therapist during the process of filming), but depending on who you are, it may be a necessary stepping stone in the way you reconnect yourself with the people around you. For Lewinsky, her acts are sacrificial, in hopes to help other young people learn from her experiences. She writes:

I believe that when we are trapped by our inability to evolve, by our inability to empathize humbly and painfully with others, then we remain victims ourselves. So, what feels more important to me than whether I am owed or deserving of a personal apology is my belief that Bill Clinton should want to apologize… He’d be a better man for it… and we, in turn, a better society…

I hope that by participating, by telling the truth about a time in my life – a time in our history – I can help insure that what happened to me never happens to a young person in our country again.

I think it should be obvious by now that Lewinsky is a woman, a human being, who, like so many of us, is simply trying to sort it out, but I know that many will take the platform of her voice to continue their own attempts to criticize and categorize her. So, while the American chorus continues to sing the debate of "victim or vixen," perhaps we can take a moment (or a few) to appreciate people like Lewinski, who push past the noise and strive to make this world a better one no matter what.

Tags: Monica Lewinsky , docuseries , Bill Clinton , affair , shame , power
Support Feminist Media!
During these troubling political times, independent feminist media is more vital than ever. If our bold, uncensored reporting on women’s issues is important to you, please consider making a donation of $5, $25, $50, or whatever you can afford, to protect and sustain BUST.com.
Thanks so much—we can’t spell BUST without U.