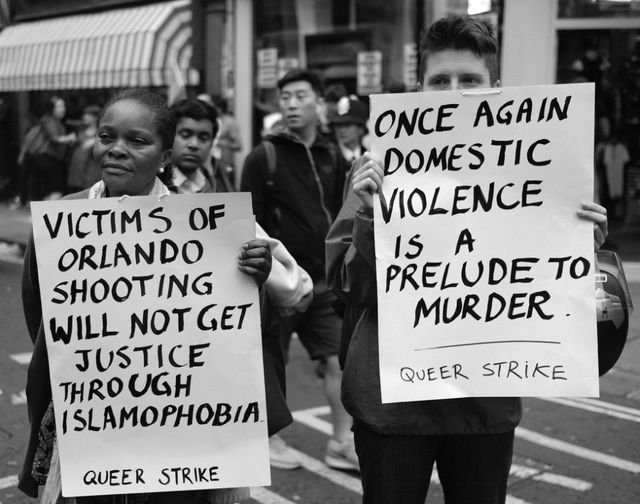 The former track and field coach of the man who shot and killed 12 people Thursday night at a California bar has come forward saying he sexually assaulted her when he was a senior at Newbury Park High School, CBS Los Angeles reports.

Dominique Colell says Ian David Long assaulted her during practice when she was trying to find the owner of a misplaced phone. She recalls to CBS LA, “Ian came up and started screaming at me that was his phone. He just started grabbing me. He groped my stomach. He groped my butt. I pushed him off me and said after that, ‘you’re off the team.’”

Feeling “horrible” and “violated,” a shaken Colell went home in tears. “He attacked me. He attacked his high school track coach,” she notes in disbelief. “Who does that?” The following day, he showed up to her practice with flowers, she told BuzzFeed News. She felt pressured into allowing him back on the team after a fellow coach told her that kicking him off would destroy his chance to become a Marine, as well as when administrators made him publicly apologize before a track meet. Colell remembers, “They come up and have Ian apologize to me in front of everybody, begging me to run the race. What am I supposed to do?” She let him back on, “and every day from then on he would come up to me with a big old smile… rubbing it in my face that he got to stay on the team.”

Prior to the assault, Colell was known to have students run a mile for every swear word they used. She said Long had once sworn at her so many times, he had to run 13 miles. When she heard he was the shooter who murdered 12 people at the Thousand Oaks bar, she said her emotions ranged from sadness to guilt for never having filed charges. However, Colell says she “wasn’t shocked by who it was,” as “there was anger there he obviously had… I don’t know if it was because I was female.”

Colell says that she doubts that any mental health problems solely contributed to the shooting, saying, “I think in this case with him, perhaps it was just a perfect storm, but it was not PTSD alone because there are so many people that have it that do not go out and do this.” A neighbor of Long’s told Buzzfeed News that he would hear loud arguments between him and his mother, often late at night. Another neighbor said he once heard several loud noises and when he walked outside to see where the sound was coming from, he saw police cars in front of the home Long shared with his mother.

Long is hardly the only shooter to have exhibited violent behavior towards women. In fact, a history of violence against women is a common thread amongst many mass shooters. The gunmen responsible for the murders at Virginia Tech, the Sutherland Springs, Texas church and Pulse nightclub in Orlando, all had histories of abusing women. These are not coincidences. Fortune compiled a list of a few statistics showing how closely related mass shootings are to violence against women. According to Everytown for Gun Safety, 54% of mass shootings, which are defined as incidents in which four or more victims are shot and killed, were related to domestic or family violence. The Bureau of Justice Statistics reports that about half of American women who were murdered were killed by their partners.

The tragedy of mass shootings generates impassioned arguments surrounding many possible contributing factors, particularly gun control and mental health. But the vast amount of statistics, evidence and research glaringly demonstrate that violence against women needs to be taken more seriously as another component to gun violence.

The Parkland School Shooting Survivors Are Speaking Up And Walking Out: Link Roundup