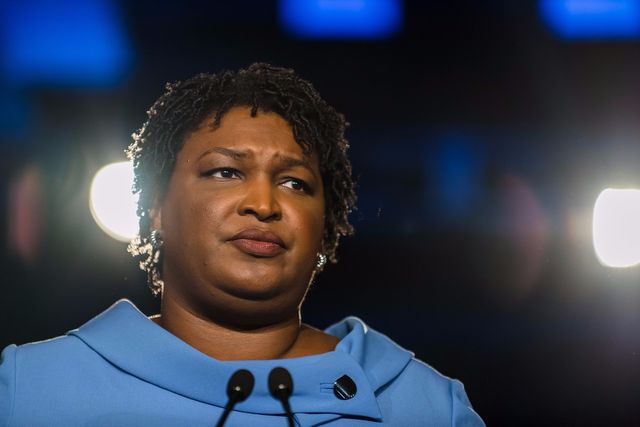 According to CNN’s most recent results, Republican Brian Kemp is only winning by around 66,000 votes, and his lead continues to wither. He currently has 50.4% of the vote to Abrams’ 48.7%, and if both percentages dip under 50%, there will be a runoff in December, CNN reported.

If she wins, Abrams will be America’s first-ever black female governor. Her platform promises housing equity, accessible ways to vote, and criminal justice reform, according to her website. “In Georgia, civil rights has always been act of will and a battle for our souls,” Abrams said in a speech, available on the Huffington Post and many other major outlets, following projections that Kemp would win. “Democracy only works when we work for it, when we fight for it, and, apparently today, when we stand in line for hours to meet it at the ballot box.”

These results follow an extended struggle with severe voter suppression in Georgia—at the hands of Kemp. As CBS reported a couple weeks ago, Kemp is currently facing lawsuits for stalling over 53,000 voter registration applications with a new “exact match” law he implemented; the Atlantic noted that over 70% of these applications came from black voters. Kemp also closed polling locations near many predominantly black communities. As Georgia’s Secretary of State, he oversees the entire state’s voting process and election system, but has consistently insisted that this somehow isn’t a bias.

“He is someone who is tilting the playing field in his direction and in the direction of his party. It is absolutely voter suppression,” Abrams told CBS. Between 2016 and 2018, the Atlantic reported, Kemp purged over 1.5 million voters and shut down 214 polling locations.

The suppression continued throughout Election Day, too. Around Georgia, particularly in black neighborhoods around Atlanta, machines were faulty and even shut down. The New Yorker reported on Tuesday that one polling location, which had always hosted at least 10 voting machines, only had three this year, forcing voters to wait hours—and, as a result, to leave before voting. One voter described a scene of chaos to the New Yorker: “She says that one poll worker was asking voters their age, ‘then pushing them to the front of the line, arbitrarily.’ When she finally got to her machine, [she] was concerned that it was ‘malfunctioning,’ she wrote, as it would not let her change a selection she had made inadvertently.’”

In a beautiful twist, though, the disorganization in Georgia even affected Kemp himself: the Huffington Post wrote that he was turned away from his polling station for having an “invalid” ID.

Abrams still hasn’t conceded, citing large uncounted numbers of absentee ballots. If you’re a Georgia voter, you can call Abrams’ Voter Protection Hotline at 1-888-730-5816 to guarantee your vote was counted. And if you’re able, you can donate to her team to combat disenfranchisement, and stand up against Kemp, who is all-around the worst. Georgia deserves a governor who cares about equality, accessibility, and the fight for every vote.

We will fight for every vote. The best is yet to come. #gapol pic.twitter.com/KKPqE9fMVw