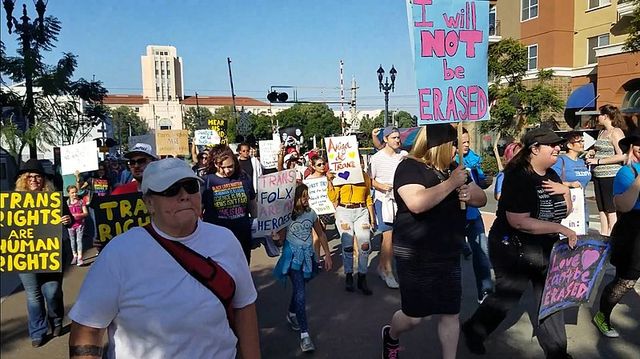 At BUST, we’ve been loud about the importance of voting November 6—of flipping the House and Senate, of showing up for candidates who will support women and oppose fascism. But one specific ballot question that deserves a spotlight, especially given recent reports that the Trump administration is aiming to cut back on rights for the transgender community, is Massachusetts’ question three.

If you haven’t heard already, question three marks a statewide vote on whether to keep in place a 2016 law that upholds protections for trans individuals. The legislation prohibits any kind of public discrimination against trans people, and allows them to use bathrooms that align with their gender.

Unsurprisingly, the “No on 3” campaign is led by a transphobic organization, titled Keep Massachusetts Safe, that believes allowing trans individuals to use bathrooms, changing rooms, and locker rooms that align with their gender identity puts women and children in some kind of danger, The Guardian reports. The Guardian also notes that the anti-discrimination law currently in place did not lead to more criminal or unsafe incidents in bathrooms—but did prevent harassment and other acts of transphobia, as per a UCLA School of Law study.

Massachusetts Governor Charlie Baker released a statement several weeks ago endorsing the anti-discrimination law in place. “In 2016, I signed An Act Relative to Transgender Anti-Discrimination, outlawing discrimination on the basis of gender identity in all public accommodations. I am grateful to the hundreds of committed activists who worked tirelessly to advance this cause because it was the right thing to do,” he wrote in a Rainbow Times exclusive. “I look forward to voting ‘Yes’ on Question 3…I am confident that voters will join me, to re-affirm that the Commonwealth will not tolerate discrimination against our fellow citizens who are transgender.”

Though Yes on 3 has widespread support across the state and even across party lines—a crowd of thousands took to Boston’s City Hall Plaza on Sunday to rally for the trans community, reports The Washington Post, and Baker himself is a Republican—there’s a lot at stake. According to Freedom for All Massachusetts, an organization fighting to keep the anti-discrimination law in place, 65% of transgender individuals in the state reported public discrimination in a year leading up to the law’s implementation. It’s a real fear that, without protections, the trans community will face even worse maltreatment today from Trump and those emboldened by his rhetoric, particularly given The New York Times' recent report that the present administration is looking to alter legal ideas of gender and “eradicate federal recognition of the estimated 1.4 million Americans who have opted to recognize themselves—surgically or otherwise—as a gender other than the one they were born into,” the Times wrote.

Massachusetts is a state that has always been at the forefront of supporting LGBTQ+ rights, and there’s something scary about what it means that even such a liberal state could be facing any kind of push to repeal anti-discrimination policies at all. As author and trans advocate Mimi Lemay told the Human Rights Campaign’s magazine Equality, “Hate groups across the U.S. see the ballot measure in Massachusetts as a potential catalyst that will help them strip rights from LGBTQ people nationwide. If Massachusetts, one of the most progressive states in the union, falls, what happens to the rest of the country?”

To learn more about question three, Yes on 3, and how to protect trans rights in Massachusetts, check out Freedom for All MA’s website. Support for keeping the law in place is pretty high—the most recent numbers state that only 28% of voters want to repeal the legislation, with 68% trying to uphold it, as the Post wrote—but your vote still matters. It’s important for us to keep protections in place for the transgender community, but it’s just as important to send a message that transphobia and discrimination won’t be tolerated in Massachusetts—or anywhere in America.