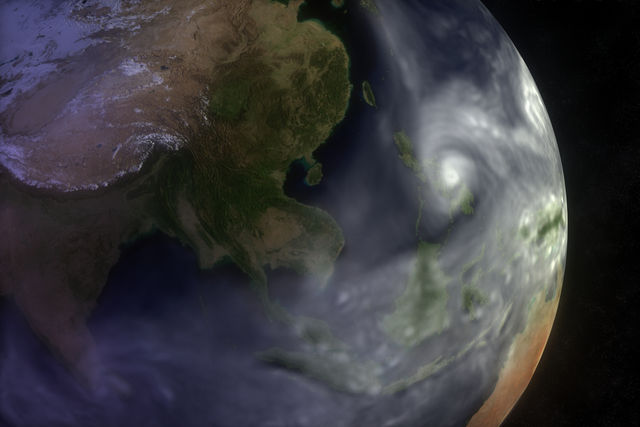 By now many people have read and reacted to the recent U.N. climate report with crippling anxiety; I certainly did. In case you missed it, The New York Times reported that, according to the U.N., avoiding irreparable and catastrophic damage to the planet requires that we transform the global economy at a “speed and scale” that has “no documented historic precedent.” If greenhouse gas emissions are not drastically decreased, by 2040 the atmosphere will heat up by up to 2.7 degrees Fahrenheit above the earth’s temperature pre-industrialization.

Since 1988, over 70 percent of greenhouse emissions have occurred at the hands of only 100 companies worldwide. The United States is one of the largest emitters, second only to China, but achieving the necessary regulations is impossible under our current capitalist government. The fight for the environment is the fight for all of our lives and for the life of our planet. I have been turning to thoughts of ecofeminism and ecosocialism in this dire time for humanity.

So, what is ecofeminism? The dictionary definition of ecofeminism is “a philosophical and political movement that combines ecological concerns with feminist ones, regarding both as resulting from male domination of society.” The term ecofeminism was coined in 1974 by French writer Francoise d’Eaubonne in her book Le Feminisme ou la Mort, which translates to Feminism or Death.

The term ecofeminism is used to describe a feminist approach to understanding ecology. Ecofeminist thinkers draw on the concept of gender to theorize on the relationship between humans and the natural world. In her book, d'Eaubonne connects the oppression/patriarchal domination of marginalized groups including women, people of color, and poor people, to the oppression and domination of nature.

Ynestra King, an ecofeminist activist, wrote for a conference in 1980, “We see the devastation of the earth and her beings by the corporate warriors, and the threat of nuclear annihilation by the military warriors, as feminist concerns. It is the masculinist mentality which would deny us our right to our own bodies and our own sexuality, and which depends on multiple systems of dominance and state power to have its way." Her reference to “corporate warriors” addresses that the majority of climate change has been caused by major corporations putting their financial interests ahead of keeping the planet alive.

In 1993, authors Greta Gaard and Lori Gruen wrote an essay entitled Ecofeminism: Toward Global Justice and Planetary Health in which they outline what they referred to the "ecofeminist framework." The essay contains a lot of data and statistics about the environment as well as theoretical explanations of ecofeminism. The framework they laid out intends to help people understand the global situation we are in, and therefore also understand how we got to this point and what we can do about it.

As Bustle points out, in many countries around the world, women and girls are responsible for gathering food and water. The destruction of our ecosystem makes it harder for them to be able to fulfill their responsibilities. Which, according to feminist political activist Sara Alcid, makes it less likely for girls to be able to attend school if they are home helping their mothers gather increasingly scarce resources. Low-income women are also more susceptible to working in environments that expose them to toxic chemicals.

As academic Leigh Grammar puts it, "Women are hurt most by the exploitation of the earth because they are the most vulnerable in patriarchal society. The main focus is on women who are more at risk because they suffer double oppression of poverty, race, education, or nation." The compounding of oppression when we talk about climate change, also leads to a related school of thought-ecosocialism.

As Motherboard defines it, ecosocialism is the notion that environmental protection is incompatible with capitalism. This is because capitalism will always be driven towards production and profits which is what has led us to the brink with climate change in the first place. System Change Not Climate Change, a website dedicated to anti-capitalism and ecoscoailism, writes that ecosocialism stems from the idea that “environmental degradation and social injustice stem from the same source: a world where profit is the highest goal.”

Environmentalism has been coopted by capitalism as we see products intended to help the individual to limit their own waste. Victor Wallis, author of Red-Green Revolution: The Politics and Technology of Ecosocialism, told Motherboard, “Unless you do away with capitalism, you’ll still have the other companies that are much more influential and bigger in scale, like oil companies. There is ultimately a clash in the wider scheme of things, even if you have one sector of a capitalist market that responds to people’s concerns about the environment.”

Ecofeminism and ecosocialism have a lot in common, in fact, System Change writes, “At the heart of an ecosocialist vision must be a profound feminism. This means promoting women’s leadership in the movement, and particularly around specific issues that affect women.” The answer to the massive question of climate change therefore goes far beyond becoming vegetarian, walking to work more often, or using a metal straw; the answer to climate change is the fight for systemic change, and it is a feminist fight.

Meet The Team Of Women Trekking To The North Pole

Men Aren’t Recycling Because It's Too Girly