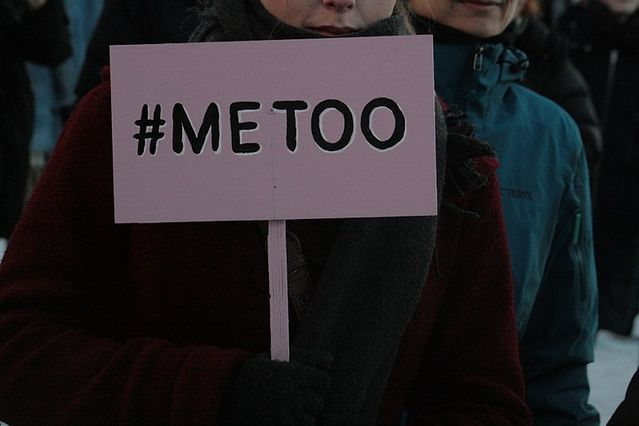 The #MeToo movement has focused on survivors of sexual assault, sexual violence, and rape coming forward to be seen and have their stories heard. #MeToo has allowed our country to begin to understand how common sexual assault and rape is, while also sparking much-needed conversations surrounding consent and the gray spaces of assault. The movement often feels like two steps forward and three steps back. Between the Kavanaugh hearings, Bill Cosby’s jail sentencing, and Louis CK’s pop-up appearances, it’s been hard to find an emotional place to settle. One year ago, after the #MeToo movement spread widely following the sexual assault accusations against Harvey Weinstein, some wondered if all of this would disappear over night as a fad. But #MeToo and #TimesUp seem to be holding strong and making changes in society, however slight.

#MeToo movement founder and activist Tarana Burke recently said that the way forward is to continue focusing on helping survivors find one another and heal. She is launching a number of initiatives, including a website where survivors can find resources in their community to start the recovery process and access information on how to become advocates. Burke notes that as much as the marching and protesting are necessary, the main mission of #MeToo is collective healing.

Reconciling the lifelong harm of sexual violence requires nuance, which isn’t our society's strong suit. Our country seems to tolerate the idea that bad people commit assault and rape, and survivors are seen as brave individuals (of course, other people exist who routinely point fingers at survivors, call them liars, and demand “evidence”). While distinguishing between good and bad is easily digestible, it’s time for us to start holding two difficult truths. Individuals can be both victims and perpetrators of sexual violence. In this way, sexual violence is akin to physical violence. We seem to have a better grasp on viewing physical violence as cyclical. It’s not a novel thought that some of those who engage in domestic violence may have experienced childhood abuse. These are learned behaviors.

To acknowledge that sexual violence is a part of a cycle, we need to swallow two hard pills: 1) Men are victims of sexual assault. One in six men will experience some form of sexual violence during their lifespan. 2) Survivors of assault can behave badly towards others.

Droves of women, ranging from everyday people to A-list celebrities, have come forward bearing their stories, however, the list of men publicly reporting is limited, to say the least. While several notable men have come forward about their experiences with sexual harassment, assault, and abuse, including Anthony Rapp, Tyler Perry, Terry Crews, Tom Arnold, Anthony Edwards, and Chester Bennington, overall, this is still a closeted issue.

In April 2018, writer Junot Diaz published a New Yorker essay detailing how his rape at age eight changed the way he viewed himself. The essay vaguely noted that this incident negatively impacted Diaz's behavior towards the women in his life as an adult. Less than one month after Diaz's piece was published, writers Zinzi Clemmons, Carmen Maria Machado, Monica Byrne, and Alisa Valdes came forward with accounts of Diaz’s misogynistic behavior and sexual harassment towards them. Only after multiple accusations received public attention did Diaz issue a statement apologizing for forcibly kissing and harassing women.

Actress and director Asia Argento has also been caught in the space of being both a victim and an alleged abuser. Argento was one of the first women to speak up about being abused and raped by Harvey Weinstein, and quickly became one of the prominent faces of the #MeToo movement. Then, this August, the New York Times discovered documents detailing a sexual assault accusation against Argento by actor Jimmy Bennett. The documents showed that Argento paid Bennett $380,000 for the copyright of a photograph showing the two in bed together when he was 17, under the age of consent, and she was 37. (Argento initially denied having any sexual relationship with Bennett, then in a later interview said that Bennett initiated sex with her and she was "frozen.")

These stories offer us just a glimpse of how complicated and messy the cycle of sexual assault and rape can be. We can empathize with someone’s assault experience while also feeling furious with their later predatory actions. Sexual assault and violence will never be tidy, so we must learn to accept the nuances. Accept the mess.

After the first report about Bennett's accusations against Argento was published, Tarana Burke tweeted, "I’ve said repeatedly that the #metooMVMT is for all of us, including these brave young men who are now coming forward. It will continue to be jarring when we hear the names of some of our faves connected to sexual violence unless we shift from talking about individuals and begin to talk about power. Sexual violence is about power and privilege. That doesn’t change if the perpetrator is your favorite actress, activist or professor of any gender. And we won’t shift the culture unless we get serious about shifting these false narratives. My hope is that as more folks come forward, particularly men, that we prepare ourselves for some hard conversations about power and humanity and privilege and harm. This issue is less about crime & punishment and more about harm and harm reduction. A shift can happen. This movement is making space for possibility. But, it can only happen after we crack open the whole can of worms and get really comfortable with the uncomfortable reality that there is no one way to be a perpetrator and there is no model survivor. We are imperfectly human and we all have to be accountable for our individual behavior.."

As much as it hurts to hear and as unfair as it may seem, these are exactly the type of conversations we need have to move forward and make real progress. We have to create a space to allow people to speak about their past traumatic experiences, take ownership of their poor choices, and figure out why and how it all happened. It’s not enough to acknowledge survivors' stories; we need to bring to light risk factors of perpetrators in order to break the cycle. The impulse to categorize everyone as either good or bad isn’t moving us forward. This is a delicate behavioral cycle we are attempting to dismantle and understand. It’s time to find a way to observe and learn instead of only blame and punish; though this is not saying survivors shouldn’t seek legal action, or that we shouldn’t hold people accountable.

Adults who have been victims of childhood sexual abuse fall into a higher risk category of people who may go on to perpetrate similar acts in adulthood. It’s not a blanket statement, but it is a risk factor. Men who hold traditional ideas regarding gender roles and masculinity fall into a higher risk category, too, based solely off of their belief system. This includes ideas such as believing men should be in charge of household finances, women should stay at home, boys don’t cry, men shouldn’t be seen as weak, etc. Research has finally proven what we have known all along: toxic masculinity is the root of all evil. Studies show that men who hold more flexible ideas around gender roles are in a lower risk category for going on to perpetuate sexual violence. While these are simply predictors, they are ideas worth noting, not ignoring.

In a time where everything feels out of control, I’m choosing to feel hopeful that future generations of boys will be encouraged to feel their feelings, appear soft and empathetic, and view women as equals. It might be too late for the boys' clubs of Hollywood and Washington, but there is a still an opportunity for men to come forward as survivors, allies, and changemakers. Women and nonbinary folks cannot carry this weight alone. We cannot continue screaming to one another through the infinite vacuum of cyberspace and doing the emotional labor on these topics ourselves in small groups. The time is now for men who consider themselves allies and “not a part of the problem” to show up, take a seat, and speak out. Our country will never heal and the cycle will never break unless all parties are actively working towards this goal together.

In Egypt, Women Are Being Jailed For Sharing Their #MeToo Stories

Tags: A look at #MeToo one year after the Weinstein accusations , and the next steps for the movement